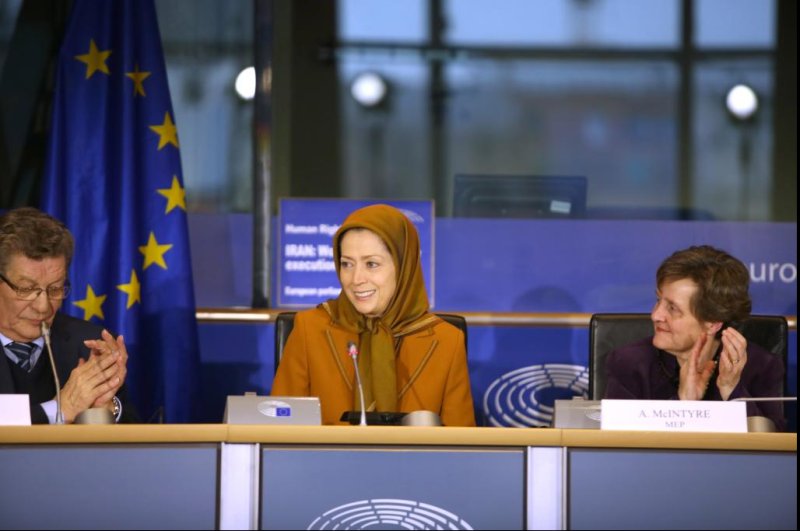 Feb. 26 (UPI) -- There are about 40 million women in the Islamic Republic of Iran, over half under age 30. At a time when women in the West have achieved political, economic, personal and social equality, Iranian women are among the most repressed in the world, ruled by a regime dominated by elderly, bearded misogynists.

It is little wonder that the nationwide protests, which have continued in almost every town and city in Iran for the past 14 months, have often been led by or involved the participation of thousands of women. Female teachers, medical staff, students, factory workers and pensioners have taken to the streets to demand an end to corruption, an end to discrimination and repression and an end to the clerical regime's aggressive military adventurism across the Middle East.

The chants of the protesters now openly call for regime change. It is clear that many of these courageous women have been inspired by Iran's main organized resistance movement, the People's Mojahedin Organization of Iran (PMOI/MEK), a part of the political coalition, National Council of Resistance of Iran, headed by its charismatic female leader Maryam Rajavi. Indeed, many of the key leadership positions within the MEK are held by powerful and resilient women.

The theocratic dictatorship in Iran has a history of targeting women with oppressive laws that would not be tolerated in the West, or indeed in most countries in the world. In Iran, women are considered the property of their closest male relative and have no legal rights. Girls of 9 can be married off by their parents. A woman's evidence in court is worth only half that of a man's. Women may not seek to have a man charged with rape unless they have four independent witnesses. All family relationships are strictly controlled by the regime's laws.

Homosexual behavior, adultery, sex outside marriage, are all prohibited. Women accused of such behavior can incur severe punishments, including beatings and death, sometimes by stoning. This is what gender equality looks like in Iran today.

Seventeen years before the 1979 Islamic revolution, Ayatollah Khomeini wrote to the shah saying that the "interests of the state are better served by preserving the religious teachings of Islam and calmness of the heart." He concluded the letter by advising the shah that the right for women to vote should not be allowed. Khomeini stated that equality between women and men was "in fundamental violation of some of the most crucial rulings of Islam and in defiance of some of the explicit commandments of the Koran."

Immediately following the revolution, Khomeini abolished the "Family Protection Law" that gave women family rights. He also canceled social services for women and abolished the role of female judges in Iran's justice system. There are only 17 female members of parliament out of a total of 290 MPs. It is perhaps not surprising that they recently passed a law banning women from riding bicycles.

Women's dress codes are also under constant scrutiny. They must wear the hijab and "morality police" are on constant patrol to enforce the law. Women, particularly young women, are singled out for brutal attacks for the "crime" of mal-veiling. Girls who were deemed to be improperly dressed in the street have suffered horrific acid attacks and stabbings, in assaults openly condoned by the mullahs. Teenage girls, arrested for the offense of posting videos of themselves dancing or singing on social media, have been publicly flogged. Young female students attending end-of-term parties have been fined and beaten.

During the 5 1/2-year reign of the allegedly "reformist" and "moderate" President Hassan Rouhani, 87 women have been executed. In 1988, based on a "fatwa" by Khomeini, the mullahs massacred over 30,000 political prisoners, most of whom were members and supporters of the MEK. Tens of thousands of those hanged from cranes, day after day, were grandmothers, mothers, pregnant women and even teenagers.

Senior members of Rouhani's government have boasted of their role in this appalling crime against humanity, which has been the subject of reports by Amnesty International and is actively being investigated by the U.N. Now the fascist mullah regime has turned its wrath on female human rights activists and even environmentalists, who are routinely rounded up by the regime's Gestapo, the Islamic Revolutionary Guards Corps, tortured and imprisoned. The cruel detention of the young Iranian-British charity worker and mother Nazanin Zaghari-Ratcliffe, on trumped-up spying charges, is simply the tip of the iceberg.

In a pledge to the opposition leader Rajavi in April, Anissa Boumediene, the former first lady of Algeria, said: "Yes, we stand with you Maryam, as we stand with all our Iranian sisters, in your fierce fight seeking to free Iranian women from what enchains and imprisons them." Her words should resonate in the West, where female politicians and activists must show solidarity with their oppressed and brutalized Iranian sisters, by backing the main democratic opposition movement and fighting for freedom, justice, human rights and women's rights and a better future for Iran's daughters, grand-daughters and all Iranians.