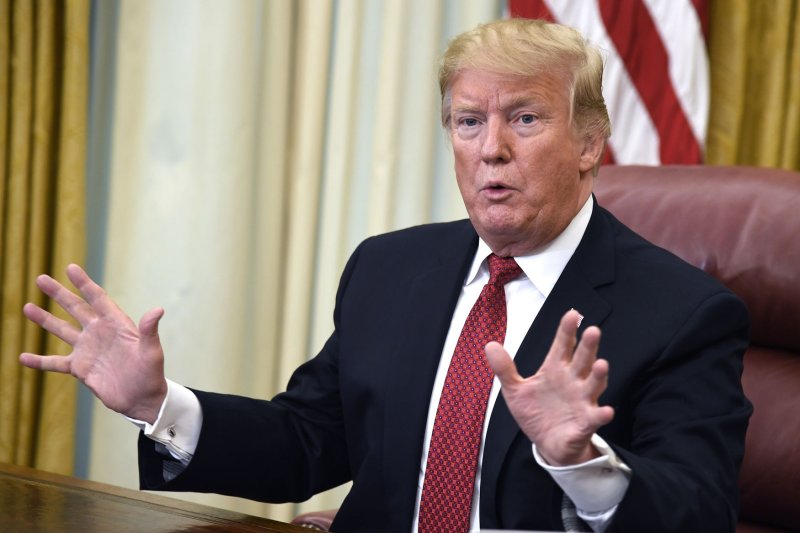 Don't count Donald Trump out for 2020. He remains formidable if he can keep his base. Photo by Mike Theiler/UPI | License Photo

Although November 2020 is 21 months away, the presidential campaign has begun. Seven Democrats have declared or established exploratory presidential committees. More will follow. Above all, America, Americans and the world at large desperately need a competent president. But will we get one?

The president has established his re-election organization. While the Mueller investigation looms as a potential Damoclean sword over the presidency, potential alternative Republican candidates bide their time. However, it is likely that someone will challenge the president.

The Constitution sets only four requirements for president. Competence is not one of them. The commander-in-chief must be "native born," a term which has been expanded to mean having one parent who is a citizen; be at least 35 years of age; resided for 14 years in America; and most importantly, win a majority of Electoral College votes. Hence, 270 is the magic number, a figure Hillary Clinton frivolously ignored, winning the popular vote and losing the election.

Nor is experience a criterion. Of the last four presidents, two were inexperienced governors -- Bill Clinton and George W. Bush. Barrack Obama was not even a one-term senator after having served in the Illinois legislature. By comparison, George H.W. Bush's experience swamped all his successors combined. And since World War II, the only other president who had minimal prior political experience was Jimmy Carter.

Donald Trump is, by far, the least politically experienced and unqualified president to hold office in nearly a century. But despite how many errors and mistakes Trump has made, his time in office was not any more unsettled than his three predecessors. For example, Clinton's list of missteps included Whitewater; Travelgate; the healthcare debacle; the so-called "bimbo explosion;" and later impeachment.

For many reasons, American politics have become poisonously vitriolic and polarized. Democrats are veering to the far left. Republicans have swerved to the far right. In the ensuing melees, compromise and civility were missing in action. The five-week partial government shutdown is a sad example of divisions that are gravely damaging America and Americans.

What is needed, in my view, is a president who is not an ideologue of left or right. The nation requires real competence in the Oval Office -- what should be the most important virtue in electing the next president. Competence also means having sufficient experience in government at high levels as well as common sense and good judgment. And it almost certainly means finding a candidate from the broad center, either moderately left or right, rather from the more extreme political wings.

RELATED Research: One-third of U.S. voters in 2020 election will be non-white

It is still early and no such person has yet emerged. On the Democratic side, the two most qualified and experienced potential candidates are former Vice President and Sen. Joe Biden and New York Mayor Mike Bloomberg. On the Republican side, former Ohio Gov. John Kasich has the requisite background and more. Sen. Mitt Romney, likewise, could make a competent president should he choose to run.

Each potential candidate has drawbacks. Biden and Bloomberg are not young. Kasich may lack charisma. And Romney may prefer the Senate. Of course, other contenders can announce.

Ironically, the richest nation on earth has not fully utilized its vast resources to the best interests of its citizens. Nor has it recently displayed the global leadership necessary to navigate the challenges and threats of which economic stagnation and climate change could be the most critical.

Predicting who will win in 2020 is impossible. Do not count Trump out. He remains formidable if he can keep his base. If former Starbucks founder Howard Schultz runs as an independent, he could tilt the outcome as Ross Perot did in 1992 and Ralph Nader in 2000.

The tragedy is that in American politics, the "middle" has become a no-man's land. While politics have always been brutal, competence has become unnecessary. And experience is dominated and dismissed by appealing to a specific base.

At the same time, life is more complicated. Think of how many passwords and user IDs one needs just to log on to the Internet, bank accounts or buy and pay online. The tax code is impossible to comprehend. And try speaking to a human in virtually any office, penetrating the horrors of voicemail and endless orders to dial this or that number only to get another artificial voice.

As no sane person would allow a dentist to practice heart surgery or a cardiologist to perform dentistry, governing requires skill, experience and competence. Each has been lacking for a quarter-century. And life is not simpler.

Will competence emerge as a fifth criteria for the presidency? One can hope.

Harlan Ullman is UPI's Arnaud de Borchgrave Distinguished Columnist. His latest book is "Anatomy of Failure: Why America Has Lost Every War It Starts." Follow him @harlankullman.