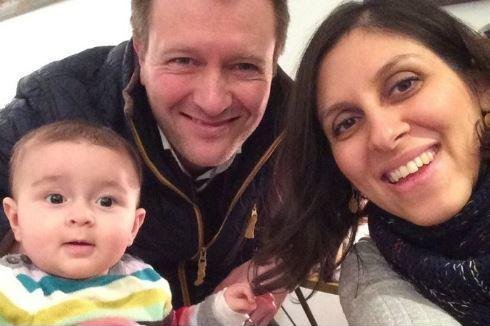 Nazanin Zaghari-Ratcliffe, 37, and her 22-month-old daughter, Gabriella, were detained in Iran in 2016 while attempting to board a flight to Britain to see her husband Richard Ratcliffe. File Photo courtesy of Change.org

Richard Ratcliffe, the husband of the jailed U.K.-Iranian woman Nazanin Zaghari-Ratcliffe, arrives to speak to reporters before delivering a letter to the Iranian Embassy in Knightsbridge, London, Britain, on February 21. File Photo by Facundo Arrizabalaga/EPA-EFE

May 24 (UPI) -- The British-Iranian Nazanin Zaghari-Ratcliffe, a 39-year-old charity worker serving a five-year jail sentence, was told in a Tehran court on Saturday that she faces new charges of "spreading propaganda against the state. "

In a barefaced display of Iranian injustice, Judge Abolghassem Salavati, clutching a 200-page dossier, informed the young mother that she was likely to be convicted. He then dismissed her choice of lawyer as "not approved."

The move against Zaghari-Ratcliffe, who has been in prison for two years, was not unexpected, as the charge of "spreading propaganda" echoes the accusations made by the Iranian regime following U.K. Foreign Secretary Boris Johnson's dangerous gaffe regarding her case. Johnson told the foreign affairs select committee in Westminster last November that she had been in Iran "training journalists," a completely unfounded and ludicrous assertion.

In fact, Zaghari-Ratcliffe works for the charitable Thomson-Reuters Foundation and was on holiday in Iran, bringing her then 22-month-old daughter, Gabriella to meet her parents. She was arrested at Tehran Airport in April 2016 as she tried to board a plane for London. Charged with spying, she was found guilty following a mock 45-minute trial. Full details of the charges against her have never been revealed, even to her.

Insiders say she is being held as a bargaining-counter against an alleged £450 million arms deal debt that Britain had arranged prior to the overthrow of the shah in 1979. The Iranian regime claims the arms were never delivered and although Britain has now agreed to repay the £450 million, there is an ongoing dispute over the amount of outstanding interest accrued over the past four decades. The new false charges against Zaghari-Ratcliffe are the theocratic regime's way of placing further pressure on the U.K.

The British mother has consistently denied that she was involved in any form of plotting against the state and certainly denies that she was in Iran to train journalists. She has always stated that she was simply in the country on holiday. But Johnson's reckless outburst now looks set to cost this innocent woman, being held hostage by one of the most dangerous and corrupt regimes in the world, her ultimate freedom.

On Saturday, Zaghari-Ratcliffe pleaded for clemency and asked Judge Salavati to allow her "to go home and have another baby," stating that as she is nearing 40 it may be her last chance. She told the judge that her daughter Gabriella will be 4 in three weeks, adding, "There is something called clemency. Give me that for the sake of my baby. She hasn't seen her father for over two years now."

It is well known that many women are in prison in Iran, guilty of nothing more than opposing the oppressive mullah's regime, or attempting to uphold human rights. Iran, under the so-called "moderate" leadership of President Hassan Rouhani, has in fact risen to the No. 1 spot globally as the country that executes most people per capita. Over 3,500 men, women and often children have been hanged since Rouhani took office nearly five years ago.

Executions are often carried out in public, as are other medieval and barbaric sentences such as floggings, amputations and eye gouging. Since the nationwide uprising that began in late December and is still continuing in cities throughout Iran, thousands more men and women have been arrested and imprisoned. Fourteen have been tortured to death.

Iran is also the world's godfather of terror, backing Bashar al-Assad's bloody civil war in Syria, the ferocious Houthi rebels in Yemen, the brutal Shi'ia militias in Iraq and the terrorist Hezbollah in Lebanon. The Iranian regime's fingerprints are on every conflict in the Middle East. This is a country that should be openly condemned by Britain for its catalog of human rights abuse and serial misogyny. Yet Britain is standing fast behind the discredited nuclear deal dumped by the United States recently.

The U.K. and other EU countries believe that lucrative commercial contracts with the fascist Iranian regime are of more importance than human rights and the fate of an innocent young mother like Zaghari-Ratcliffe.

Her husband, Richard, has made frantic efforts to have his wife freed, disclosing that she is now ill and suffering from extreme stress, although apparently, she was allowed to phone the "new British ambassador" from prison at the weekend, the first time she had been permitted to have any contact with the embassy in over two years. She was able to update the ambassador on the new charges she faces and she apparently asked him to issue a formal diplomatic note protesting at the invented accusations.

There is no such thing as justice in Iran and it is outrageous that a young mother and British citizen could be facing a further 16 years in a hellhole prison on such trumped-up and ridiculous charges. The White House strategy of maximum pressure on North Korea led to the release of three American hostages and an agreement to hold peace talks. Instead of simpering appeasement, Britain and the EU should be pursuing a policy of maximum pressure on the pariah Iranian regime.

We need to take a firm line with the mullahs in all areas, including renewed diplomatic and trade sanctions, until innocent hostages, including Zaghari-Ratcliffe, are released.

Struan Stevenson, coordinator of Campaign for Iran Change, was a member of the European Parliament representing Scotland (1999-2014), president of the Parliament's Delegation for Relations with Iraq (2009-14) and chairman of Friends of a Free Iran Intergroup (2004-14). He is an international lecturer on the Middle East and is also president of the European Iraqi Freedom Association.