To Venezuela, this week's sanctions are a joke 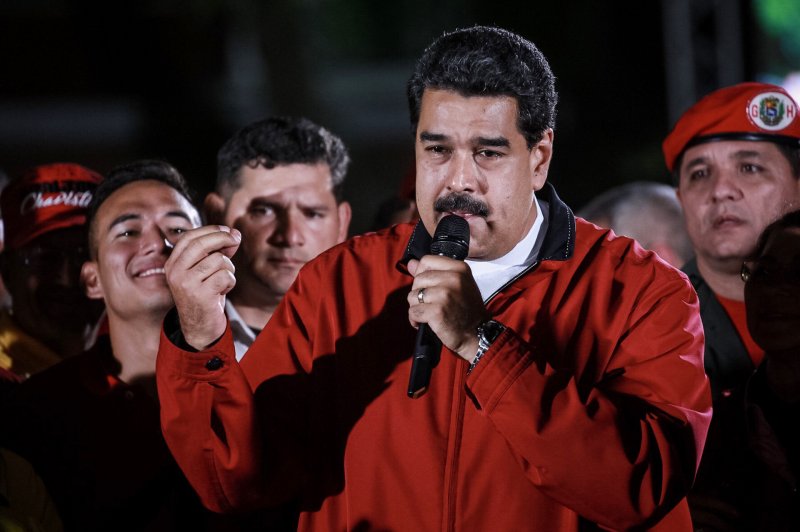 Aug. 2 (UPI) -- This week, the Trump administration took the rare step of declaring Venezuelan President Nicolas Maduro a "dictator," freezing his assets and banning Americans from doing business with him.

"Maduro is not just a bad leader; he is now a dictator," President Donald Trump said in a statement.

I watched this movie again and again in the three years I spent covering Venezuela for the Associated Press. It's always the same script and the same ending: Maduro blasts the United States for its attempted meddling, then goes back to the business of presiding over his country's economic collapse.

This time around, the United States tried to punish Maduro by freezing his American assets; he has none. It forbid Americans from doing business with him as an individual - something he hasn't seemed interested in doing - but still allowed them to contract with Venezuela as a country.

"Maduro's going to have a good laugh with this," said David Smilde, a Tulane University expert on Venezuela. "It's not going to amount to a lot."

Venezuela is crossing clear lines. Maduro, the hand-picked successor to late President Hugo Chavez, has grown deeply unpopular since taking power in 2013. People are hungry. Hospitals are in ruins. Four months of daily protests have left more than 120 dead and brought on international condemnation. And over the weekend, Maduro dealt a potentially fatal blow to the country's once stable democracy:

RELATED U.S. insists all options are on the table with Venezuela

He held an election creating a new, all-powerful congress stacked with his supporters. His wife was elected; so was his son. Streets were mostly empty the day of the election, but Maduro said 40 percent of the country voted. International elections observers were banned.

U.S. sanctions already in place didn't stop any of this from happening. They've only helped Maduro argue that his country is in shambles not because of his own mismanagement, but because Americans are out to get him, sabotaging the economy at every turn.

Take what happened in 2015, when the Obama administration declared that Venezuela was "a threat to national security" and sanctioned seven top officials for human rights violations. Maduro, whose approval ratings had been dismal, got one of the biggest bumps of his presidency. The sanctions let him point to an example of imperialist bullying. People rallied around him against this outsider intrusion. Maduro rewarded all seven officials with promotions and covered the capital in anti-sanction billboards that still adorn parts of Caracas, looming over food lines and formations of riot police

The Obama administration saw how Maduro used the sanctions to his advantage and didn't issue any more. The country's economy continued to fall apart - three-quarters of Venezuelans were losing weight and 80 percent of medicines were in short supply.

With the arrival of the Trump administration this year, sanctions resumed.

Each time, they gave Maduro an opportunity to blame someone other than himself for the country's descent.

When the U.S. sanctioned Venezuela's vice president for alleged involvement in the drug trade, Maduro responded by giving his second-in-command even more power.

When the United States sanctioned members of Venezuela's Supreme Court for abolishing its Congress, Maduro praised them in a public ceremony.

When the United States sanctioned more senior Venezuelan officials for corruption, Maduro gave them all special swords on live television.

So it makes sense that when U.S. Congress members and think tanks reacted to Monday's sanctions by issuing stern statements, Venezuelans were mostly cracking jokes.

The United States hasn't hit Maduro where it truly would hurt - the oil trade.

Almost all of Venezuela's export revenue comes from oil, and the United Statse is its most important customer. An oil embargo would be as dramatic as Monday's sanctions were anticlimactic. The Maduro administration might implode, and the country's hunger crisis could escalate to famine.

The United States doesn't necessarily want to drop that kind of a bomb. It doesn't want to create a refugee crisis in a country three hours from Miami; already, Venezuela exports more asylum cases than any other nation. Not to mention, an embargo would hike gas prices for American drivers.

So for now, Maduro is thumbing his nose.

"Sanction anyone you want!" he shouted during an address on state television Monday. "The Venezuelan people have decided to be free, and I've decided to be the president of a free people."

The camera panned to an audience of top officials, many sanctioned themselves, all applauding. A minister fiddled with an expensive-looking watch, then went back to clapping.

One thing about those other three men in the sanctioned-leader club: They're all still in power, and living large. Last year Zimbabwe's President Mugabe celebrated his 92nd birthday with a million-dollar party, and jetted around the world to places like Cancun and New York while his people starved.

Toward the end of his speech Monday, Maduro issued some sanctions of his own, on private television stations that had not given his Sunday election positive coverage, and said his opponents would get what was coming to them. Early Tuesday, the secret police arrested two high-profile opposition leaders and took them to military prison. Another line crossed.

Voices // 1 day ago
Alexei Navalny leads Russians in a historic battle against arbitrary rule
Feb. 26 (UPI) -- Tens of thousands of young Russians led by Alexei Navalny are protesting the leadership of President Vladimir Putin nationwide in freezing temperatures. Thousands have been arrested. 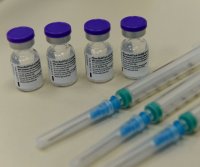 Voices // 2 days ago
History of medical abuse makes Black Americans wary of COVID-19 vaccine
Feb. 25 (UPI) -- Black people have many legitimate reasons to be in no hurry to get the COVID-19 vaccination.

Voices // 3 days ago
Texas winter storm exposed massive risks for disruption
The massive disruption of Texas and what turned out to be a highly vulnerable power grid to a super snow and ice storm last week should have been no surprise. Nor should the COVID-19 pandemic.

Voices // 4 days ago
Shared prosperity: the crying need for inclusive globalization
Feb. 23 (UPI) -- The disaffection of a wide swath of the American population has been linked to the political polarization of the country, as well as its divisive tendencies, such as the increase in White supremacy.

Voices // 5 days ago
Nuke the nuclear deal with Iran
Feb. 22 (UPI) -- The Trump administration may have been wrong on a lot of things, but its "maximum pressure" policy on Iran was absolutely right. 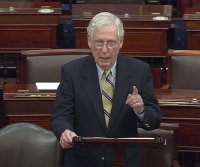