North Korean military vehicles carrying missiles drive past during a parade for the 'Day of the Sun' festival on Kim Il Sung Square in Pyongyang, North Korea, on April 15. Photo by How Hwee Young/EPA

MOSCOW, April 24 (UPI) -- A New York Times headline gushed "new Cuban missile crisis on the Korean peninsula." What nonsense. There may be a crisis. It may be nuclear. But it is as far removed from the (in)famous "13 days in October" and Soviet leader Nikita Khrushchev's failed attempt to install short-range nuclear missiles in Cuba as earth is from Pluto.

Clearly, Kim Jong Un's attempts to miniaturize a nuclear warhead and fit it on an intercontinental range ballistic missile capable of striking America is a top North Korean priority; perhaps second only to maintaining absolute political power. But unless China, Russia or another nuclear power are stationing their weapons in North Korea, the analogy with Cuba is plain wrong. The better analogies are with the Soviet Union exploding its first nuclear weapon in 1949 and then Communist China in 1964.

In those days, the same charges about irrationality and instability were leveled at Stalin, our wartime ally, and Mao with whom we fought a war in Korea from 1950 to '53. Stalin and Mao may have had better tailors and barbers than Kim. However, both were viewed with equal or greater menace as the Soviet Union had gobbled up much of eastern Europe and threatened the rest. China was controlled by a communist leadership dedicated it was thought on overthrowing the states around it in close conjunction and alliance with Moscow.

In 1949 and 1964, serious people proposed pre-emptive attacks to rid our enemies of any and all nuclear capacity. What many did not know was that in 1949, our nuclear inventory was modest at best. In 1964, despite our triad of land-based missiles and bombers and Polaris submarines, pre-emption against China was seen as dangerously escalatory, especially since the Soviet Union was increasing its nuclear capabilities and Washington planners believed a war against China would engage the Soviet Union. As in many other cases where knowledge and understanding of the adversary were missing in action, we were wrong about what was a non-existent alliance. We were not wrong about not launching a pre-emptive attack however.

Instead, U.S. leaders came to believe that the threat of thermonuclear war provided sufficient deterrence against any attack by or war with our then adversaries. By the mid to late 1960s, nuclear theology was expressed in Defense Secretary Robert McNamara's arbitrary definition of "assured destruction." If the United States could destroy about half of the Soviet Union's industry and kill about a third of its population, that was sufficient destruction to deter. Similar arguments were used with China.

Today, North Korea seems determined to achieve the capacity to strike the United States with a nuclear weapon delivered by intercontinental missile. The fear as we expressed about Stalin and Mao is that the boy leader of North Korea is irrational, unstable, unpredictable and therefore very dangerous. Hence, given nuclear weapons, Kim is liable to use them. This time however, this reasoning could not be more mistaken. Kim's overriding and existential priority is regime survival. Were Kim to start a war, he knows that North Korea would be destroyed.

Kim's view, hardened by Saddam Hussein and Moammar Gadhafi's decisions to give up weapons of mass destruction and suffer the consequences, is that only nuclear weapons will prevent the United States from overthrowing his regime. In a sense, this is quite rational and understandable. The recent retaliatory of U.S. Tomahawk strikes in Syria over the use of sarin gas and the 20,000-pound bomb strike against the Islamic State in Afghanistan no doubt reinforced Kim's need for nuclear weapons.

When President John Kennedy asked his joint chiefs of staff what the probability was that a pre-emptive strike would destroy or neutralize all of the Soviet missiles in Cuba in 1962, the response was not 100 percent. Even if the United States was to employ nuclear weapons to eliminate Kim's capability, 100 percent effectiveness could not be guaranteed. And Kim does not need a missile to deliver a nuclear warhead to America. While Federal Express might not be the appropriate carrier, surely a benign-looking merchant ship is.

As Sen. John McCain somberly observes, North Korea has tens of thousands of artillery and missile systems well within range of Seoul some 30 miles away. These systems could deliver within several tens of minutes the conventional equivalent of a Nagasaki-size A-Bomb on the millions of residents in Seoul, as well as U.S. military bases -- about 15,000 tons of explosives. Not even nuclear strikes on these hardened positions would eliminate this capacity.

Then there is the little matter of the million-man North Korean army. In a conventional war, that army would be demolished. But the cost would be many, many thousands of casualties. Whether or not the United States would employ nuclear weapons against these ground forces is problematic if used pre-emptively against North Korea's nuclear sites -- although it could.

Hence, any war would destroy much of the Korean peninsula; drive potentially millions of North Koreans across the Yalu into China; and conceivably end with a nuclear strike on the U.S. homeland through some clandestine means possibly weeks or months after the war ended. As in November 1950 when China could not permit U.N. and U.S. forces to occupy all of North Korea, what Beijing might do if a similar circumstance arose is far from certain.

It is clear that for good or ill reasons, diplomacy and incentives to delay or prevent North Korea from obtaining nuclear weapons have not succeeded. China, so far, has not been decisive in forcing or encouraging Pyongyang to forgo or slow down its nuclear programs. Given the huge costs of another war, however, diplomacy should not be dismissed as a first step even though President Donald Trump has declared an end to America's "strategic patience""and promised a "solution" to the North Korean bomb.

Therefore a high-level delegation led by the United States, perhaps with Chinese participation, should be convened to meet with North Korean senior officials but with sensitivity and secrecy. Negotiations with the North have been painful. Yet, in exchange for guarantees that the United States will not pre-emptively strike and will respond only if North Korea moves aggressively against the South or its neighbors, North Korea will both limit its nuclear programs and allow inspections to that end from an appropriate organization such as the International Atomic Energy Agency. Sanctions could be eased.

No certainty exists that such a meeting would be convened or produce successful negotiations. Nor is there certainty that the North would honor any agreement. If sanctions were lifted, Pyongyang could still cheat using the economic advantages to develop further nuclear capability. In that case, the threat of annihilation of the North remains the key to deterrence.

For those who are skeptical or hostile to such a proposal, it worked during the Cold War with a far more powerful Soviet Union and Communist China. That does not mean success will be repeated. However, the alternative of a war on the peninsula that could escalate far beyond and involve nuclear weapons does not seem a more attractive choice.

Harlan Ullman is UPI's Arnaud de Borchgrave Distinguished Columnist, a senior adviser at Washington, D.C.'s Atlantic Council and chairman of two private companies. His next book, due out this year, is "Anatomy of Failure: Why America Loses Wars It Starts," which argues that failure to know and to understand the circumstances in which force is used guarantees failure. Follow him on Twitter @harlankullman. 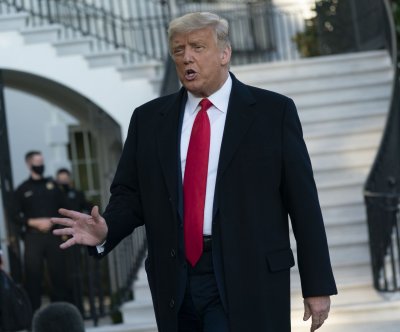 Voices // 1 day ago
Russian media may be joining China and Iran in turning on Trump
Oct. 22 (UPI) -- China, Iran and even Russia seem to crave a return to normalcy -- and, to some extent, American leadership in the world.

Voices // 2 days ago
Trafalgar offers history lesson for China threat
To many observers in the United States, China is America's main threat and enemy. The litany of wrongdoings and evidence of China's malevolence is long.

Voices // 3 days ago
Disney's pivot to streaming signals severe economic crisis to come
Oct. 20 (UPI) -- Disney has announced a significant restructuring of its media and entertainment business, boldly placing most of its growth ambitions and investments into its recently launched streaming service, Disney+.

Voices // 4 days ago
Revolution is in the air with Iran's economy in free fall
Oct. 19 (UPI) -- Sixty million Iranians, 75% of the population, are living below the international poverty line.