U.S. retaliation will not end suffering in Syria 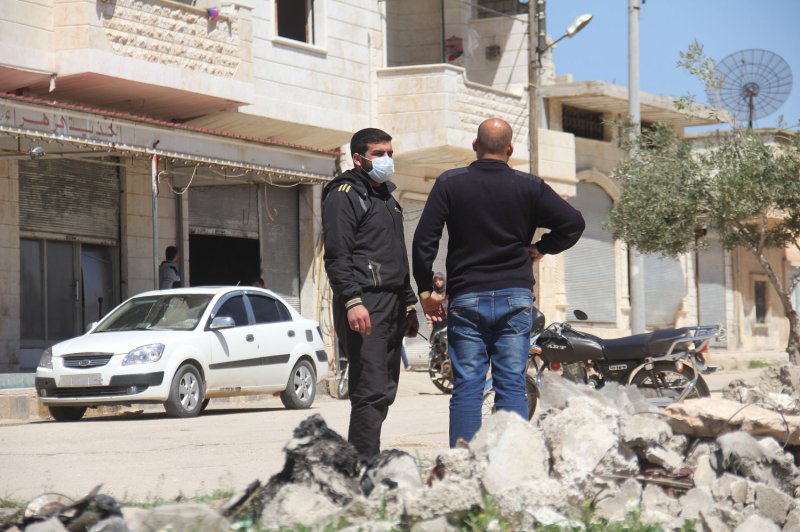 April 10 (UPI) -- The Syrian government's alleged chemical attack on civilians in Idlib Province sparked worldwide outrage and prompted the first direct military strike by the United States since the war in Syria began six years ago.

According to United Nations Secretary General Antonio Guterres, the international community must come to the conclusion that "war crimes are going on in Syria."

War crimes are indeed happening in Syria, but Tuesday's chemical attack was not the first, nor did it signal "new depths of depravity," as Susannah Sirkin, Physicians for Human Rights' director of international policy and partnerships, put it in a statement.

It is a continuation of the depravity that has been reported in Syria since the beginning of the conflict in 2011. Nearly every party involved has been accused of carrying out acts that could amount to war crimes. Some continue to do so, every day, with impunity. But until Thursday's missile strike on the al-Shayrat Airfield by 59 Tomahawk missiles, the United States has not acted militarily against Syrian President Bashar al-Assad.

The missile assault pointed to a possible shift in U.S. policy in Syria, which had recently moved focus away from ousting Assad. On Thursday, though, U.S. secretary of state Rex Tillerson signaled to reporters that the Trump administration would push for Assad's removal in the wake of the gas attacks. According to Valerie Szybala, executive editor at the Syria Institute, photos and videos of the effects of the chemical attack "genuinely affected" President Donald Trump, and "a little bit of the reality [in Syria] finally struck him."

While the U.S. attack did send a clear message, it did not put an end to the suffering in Syria. Chemical weapons "are very powerful because they strike terror in people and there isn't a way for civilians to protect" themselves, Ole Solvang, deputy director for emergencies at Human Rights Watch, told Syria Deeply. However, they are just a small percentage of the horrors of everyday life in Syria. The chemical attack killed 72 people on Tuesday (now 84), but the total civilian death toll for that day was 198, according to the Syrian Observatory for Human Rights.

The Syrian government has been accused of a plethora of war crimes that have prompted several U.N. resolutions but no real change. Some believe the U.S. missile attack will have no more impact than the resolutions.

"I can understand two messages from this," said Abdulkafi al-Hamdo, a language teacher turned media activist, in a Whatsapp group conversation used by Syrian residents to communicate with foreign media and observers. "First, we are not punishing [Assad] for what he did but [to ensure he will] not to do it anymore. The second message is: Go ahead with using barrel bombs, vacuum rockets, cluster bombs, phosphorus weapons and any [others], but not chemical weapons."

Before 2013, the Syrian government stored chemical weapons at the al-Shayrat base. In 2015, Russia said it was "reinforcing" the base, and one military source told AFP that it was being "prepared to become a Russian military base." Russian defense ministry spokesman Maj. Gen. Igor Konashenkov said Friday that the U.S. raid destroyed MiG-23 Syrian fighter jets that were being repaired. Photos show damage to one of the two runways at the base.

The Pentagon said preliminary indications are that aircraft, infrastructure and equipment at the airfield were "severely damaged or destroyed" and that the missile attack reduced the regime's capacity to deliver chemical weapons.

RELATED Tillerson: Airstrikes 'warning' to Syria, not a policy change

But while the strike might discourage Assad from using powerful chemical weapons, if history is any guide, the U.S. retaliation will not be enough to deter the use of all toxic substances.

When the Syrian government used sarin gas on two villages in Eastern Ghouta in 2013, the world was equally outraged, despite the fact that it was not the first time chemical attacks had occurred in Syria. However, in that case the public condemnation did not result in military action. The United Nations Security Council passed a resolution that would see the Organization for the Prohibition of Chemical Weapons call for a "complete elimination of all chemical weapons material and equipment" in Syria. By June 2014, the last of Assad's declared chemical weapons had been removed from Syria to be destroyed.

However, "attacks with chemicals have been happening on a regular basis since 2013," said Solvang of Human Rights Watch.

The Syrian Network for Human Rights has documented 167 attacks using a toxic substance since the first U.N. resolution in September 2013. Forty-five of those attacks were carried out after August 2015, when the U.N. passed a resolution establishing the Joint Investigative Mechanism to "identify perpetrators using chemical weapons in Syria."

Such attacks have become so frequent in Syria that most fail to make international news headlines. This year alone, SNHR documented eight attacks using toxic substances prior to Tuesday's attack in Idlib. Just this week patients and staff at a Doctors Without Borders-supported hospital in Hama reported suffering from symptoms "consistent with an attack using chemicals" after a helicopter dropped a bomb at the facility's entrance. There was no public outrage, though.

When the attack happened in Idlib, many in Syria thought the world's reaction would be the same. "The question is this: Did you write reports about the previous chlorine attacks?" asked Abdulkafi al-Hamdo. "If not, please don't write about this. We said hundreds of times that there are chlorine attacks and people were silent."

In the immediate aftermath of the Idlib attack, residents, doctors and activists believed that the toxic agent was chlorine gas – the "most common" substance being used in chemical attacks since 2013, Solvang said. Chlorine, which is a common cleaning agent, is easily produced and can be weaponized in concentrated quantities but is not banned under the Chemical Weapons Convention.

Chlorine attacks have often caused injuries but rarely resulted in death. However, over the past three years, an increasing number of people have been killed in suspected chlorine attacks.

"There could be many different explanations for that," including population density and the terrain, said Solvang, noting that as early as December there were unconfirmed reports of changing symptoms, specifically pinpoint pupils – a telltale sign of exposure to a nerve agent.

The exact nature of the chemicals used on Tuesday has yet to be identified, and it remains to be seen whether they were newly obtained or had not been declared in the 2013 weapons purge. In the meantime, it is civilians in Syria who will continue to suffer.

Alessandria is the managing editor of Syria Deeply. This article originally appeared on Syria Deeply, and you can find the original here. For important news about the war in Syria, you can sign up to the Syria Deeply email list.

Italy declares state of emergency due to worst drought in decades