Rohingya refugee from Myanmar: 'They cut the bodies into four pieces' 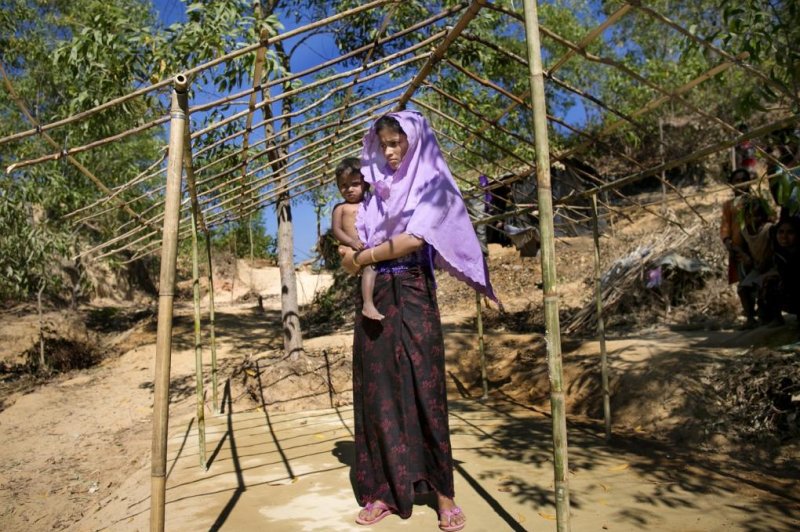 Hasina Begum in the house she is building in Balu Kali refugee camp. She says she doesn’t have enough money to finish it. Hasina, who fled in mid-January, says the military attacked her village, rounded up the women and girls and raped those as young as 11. Photo by Allison Joyce/Koan Collective

Feb. 9 (UPI) -- Hasina Begum is still reeling from the stomach-churning scenes that she witnessed before she fled her home. She points to her knee, then to the top of her thigh as she describes how the Myanmar military quartered the bodies of the Rohingya men they killed when they attacked her village called Bura Shida Para in Rakhine State, Western Myanmar.

The military would "cut the men up into four pieces and bury them in the ground," so people couldn't photograph proof of the atrocities, the 20-year-old woman explained.

Hasina, who fled to Bangladesh in mid-January, said the soldiers who attacked her village rounded up the women and girls. About 13 soldiers took two teenage girls and raped them while the rest of the women, including their mothers, watched.

Forced to watch the brutality, "I asked Allah to kill me, asking why he is torturing me," Hasina said, sharing a trauma that manifests itself in the form of frequent nightmares.

"l will never miss Myanmar," she added, in a decisive, measured tone. "All I want here is food, clothes and a house and I will be happy."

The U.N. issued a new report last week that includes hundreds of testimonies from newly arrived Rohingya refugees in Bangladesh recounting similar horrors: mass killings, the slaughter of babies, the gang rape of women and girls and razing of villages where the ethnic minority community lived. 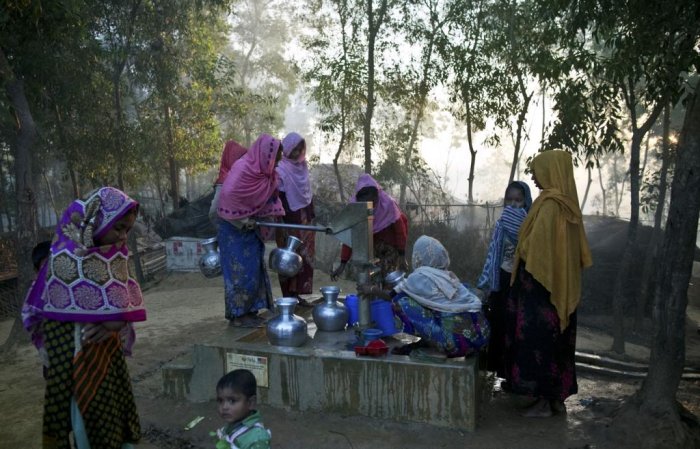 More than 66,000 Rohingya Muslims have fled to Bangladesh from Myanmar since October 2016, after the army launched what it calls "clearance operations" in response to an attack claimed by the Rohingya militant group, Harakah al-Yaqin, which killed nine police officers.

The militant group has ties to Saudi Arabia and Pakistan, according to the International Crisis Group. It was established following violent clashes between Buddhists and Muslims in 2012, which killed 200 people and displaced over 120,000.

Rohingya refugees peer through the screen of a restaurant in Kutapalong. Photo by Allison Joyce/Koan Collective
Advertisement

The latest U.N. report was put together by a four-member team from the U.N. Human Rights Office that in January interviewed Rohingya refugees who had entered Bangladesh from northern Rakhine State in the aftermath of the Oct. 9 attacks.

U.N. mission leader Linnea Arvidsson said the testimonies are clear evidence of "persecution on ethnic grounds, which is similar to what has been, in other contexts, described as 'ethnic cleansing.'"

Newly arrived Rohingya children warm themselves by a fire in Kutapalong. Photo by Allison Joyce/Koan Collective

Since the start of military campaigns in October, waves of Rohingya civilians have fled across the border, joining an established population of approximately 500,000 Rohingya who fled to Bangladesh in recent decades.

The majority of the new arrivals relayed harrowing stories of the military attacking their villages, shooting at random, setting houses on fire and systematically raping girls and women. Human Rights Watch's analysis of satellite images in December found at least 1,500 homes have been razed in the area. 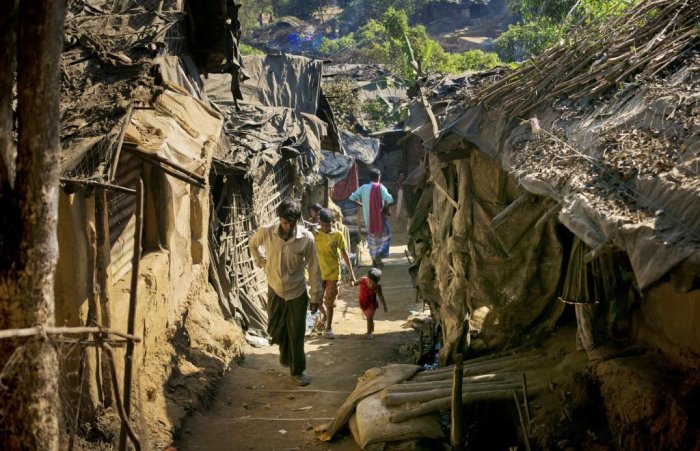 Many of the new arrivals have constructed houses from bamboo and plastic sheeting in makeshift camps in Bangladesh's Cox's Bazar district.

"Many are living cramped together, often doubling up with extended family and friends, thus increasing the likelihood of communicable disease outbreaks. The new influx is putting enormous pressure on local government and humanitarian agency resources," Peppi Kiviniemi Siddiq, project manager at the International Organization for Migration in Bangladesh, said in an email interview with Refugees Deeply.

Houses sprout up every day in the Balu Kali camp in Cox’s Bazar for newly arrived Rohingya refugees. Photo by Allison Joyce/Koan Collective

"New shelters are also being erected in areas that will be flooded during the rainy season. Furthermore, injuries suffered in Myanmar or during the crossing of the border and the limited access to food and decent nutrition are further impacting the newcomers' health and well-being," Peppi added.

Of the hundreds of thousands in Bangladesh, only 30,000 Rohingya refugees have been registered and "officially" live in Bangladeshi camps. The registered Rohingya are provided with aid and support by UNHCR and the Bangladesh government. Unregistered refugees receive no official aid, and their informal status puts them at risk. They seldom visit hospitals or approach the police to report crimes, fearing that they will be discovered, arrested and possibly returned to Myanmar.

They have few options to earn a living other than fishing, rickshaw pulling or working as day laborers in fields, where they are often paid much less than their Bangladeshi co-workers.

Sultan Ahmed, 68, came to Bangladesh 10 years ago from Myanmar. He says that in Myanmar he and his family could not move freely and often had to pay money to the military or they would be beaten. "I won’t go back. If I do, they’ll try to kill me," he says. Photo by Allison Joyce/Koan Collective

Even the oldest generations of refugees struggled to survive in Bangladesh before finding stable financial footing. Abdul Kuddas, 50, came to Bangladesh 30 years ago. "I left my country because I had a dream to open a shop. If I wanted to go to the market [the local Myanmar authorities] beat me for no reason. I couldn't travel freely. I had land where I harvested rice, but the government took half of whatever I grew."

Kuddas was registered as a refugee about 25 years ago by the Bangladesh government and receives a ration card and medical support. When asked about the newly arriving refugees, Kuddas says: "I feel bad that they have to leave their birthplace, and here they don't have human rights. Here, they can't register and get ration cards [anymore], so it's difficult to earn a living."

The newest arrivals are indeed in a more precarious position than their predecessors, both in terms of protection and basic services.

Fatema Begum came to Bangladesh from Careypara village in Myanmar just days ago. When the military attacked her village, she lost track of her husband and now does not know if he is still alive. Photo by Allison Joyce/Koan Collective

Fatema Begum came to Bangladesh in the past month after the military attacked her village of Careypara in Myanmar. She fled from one village to another, 16 times, before crossing the border into Bangladesh. "One day we were sitting in our home and we heard the sounds of firing. I gathered my children and fled to nearby villages, fleeing each one as [the military] came and attacked. It took us two months to reach Bangladesh." 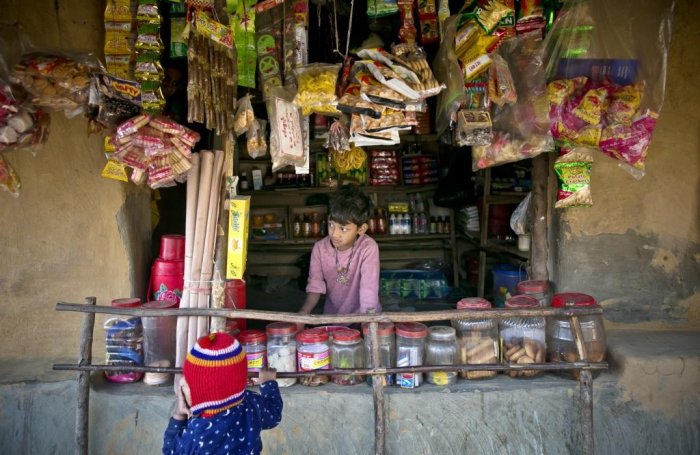 A young boy works at a shop in Kutapalong. (Allison Joyce/Koan Collective)

She and her children passed by partially buried dead bodies on the road as they fled. "I used to cry we had no security. For two months, I didn't sleep. The fear almost killed me every moment."

Now in Balu Kali camp in Cox's Bazar, Fatema says she and her family don't have enough food. She sits idle all day thinking about her life back in Myanmar. "I cry I miss my country and my house. We had a lot of food to live on, but now we're helpless here," she said.

The Rohingya Muslim ethnic minority group have long been described by human rights organizations as the "most oppressed people in the world." The waves of violence that have taken place since last October, with evidence of atrocities against Rohingya in Rakhine State accumulating nearly every week, point to a crisis that is only getting worse.

Allison Joyce is a Boston-born photojournalist based between Mumbai, India, and Dhaka, Bangladesh. This article originally appeared on Refugees Deeply, and you can find the original here. For important news about the global migration crisis, you can sign up to the Refugees Deeply email list.