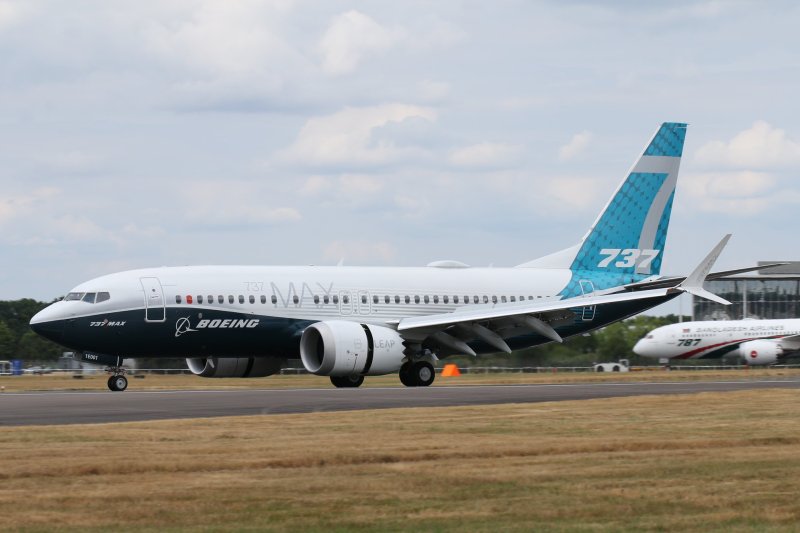 A bird strike likely contributed to the deadly 2019 crash of a Boeing 737 MAX 8 (pictured) operated by Ethiopian Airlines, the U.S. National Transportation Safety Board said Tuesday in its final report on the incident. File Photo by Cityswift/Flickr

The NTSB released its final report Tuesday on the factors analyzed in the crash that killed 157 people in 2019.

Tuesday's report deviated in multiple parts from conclusions drawn by the Aircraft Accident Investigation Bureau of Ethiopia, which released its findings in December. The EAIB final report was issued without soliciting input from the NTSB.

"The NTSB's review found that the final report contained new information that the EAIB had not afforded the NTSB the opportunity to review before the report was issued," the American agency said Tuesday on the first page of its report.

The EAIB blamed an electrical malfunction for pitching the nose of the Boeing 737 MAX 8 aircraft up, from which the pilots were unable to recover.

"According to the EAIB's final report, electrical problems that existed since the time of the accident airplane's production caused the left angle-of-attack sensor heater to fail, which resulted in the AOA sensor providing erroneous values that caused the MCAS to pitch the nose of the airplane downward," resulting in the crash, the NTSB report reads.

In its report, the NTSB says it found no evidence to support the electrical problem line of thinking. The agency does not dispute that the plane's angle of attack pitched up, leading to the failure of the much-publicized Maneuvering Characteristics Augmentation System, commonly referred to as MCAS.

RELATED JetBlue plane bumps into another plane at JFK airport

However, it says that faulty reading was "caused by the separation of the AOA sensor vane due to impact with a foreign object, which was most likely a bird."

The NTSB also disputes EAIB claims that inadequate MCAS documentation for flight crews played a role in the accident.

"Boeing had provided the information to all 737 MAX operators four months before the Ethiopian Airlines crash", the NTSB said Tuesday.

In their interim report issued in 2020, Ethiopian authorities blamed Boeing for the crash.

The Ethiopian Airlines crash came less than six months after another Boeing 737 MAX 8 plane crashed into the Java Sea 13 minutes after takeoff, killing all 189 people on board. That flight, operated by Indonesian airline Lion Air, began raising questions among pilots about the MCAS system, designed to automatically correct a plane's overly-steep angle of attack.

Several pilots went on record as saying they had no idea such a system existed on the aircraft, which entered commercial operation in 2017.

Both accidents and their close proximity to each other led to the eventual worldwide grounding of the planes, which lasted for more than a year.

Earlier this month, China became the last country to give the planes the green light to once again resume service.

In late September, Boeing agreed to pay families of the victims of both crashes more than $200 million, settling legal claims the aerospace company "put profits over people" and misled investors about the safety of the aircraft.

U.S. News // 7 hours ago
Two officers wounded, suspect killed in gunfight following traffic stop
Feb. 5 (UPI) -- A man was killed in a gun battle with police that erupted after he pulled a firearm and shot two officers attempting to arrest him following a traffic stop early Sunday in southern Indiana.

U.S. News // 15 hours ago
Death row inmate's attorneys called sentence 'justifiable lynching' in 1999 hearing
Feb. 5 (UPI) -- Attorneys for a Black death row inmate in Texas are seeking that his sentence be relieved in light of evidence detailing racists attitudes and actions from his previous counsel and the all-White jury that sentenced him.

U.S. News // 16 hours ago
NYPD seeking suspect who shot off-duty officer in the head in robbery
Feb. 5 (UPI) -- A New York Police Department officer is in critical condition after being shot in the head during a robbery attempt as he attempted to buy a vehicle from Facebook Marketplace.

U.S. News // 17 hours ago
No jackpot winners in Saturday's Powerball drawing, prize reaches $747 million
Feb. 5 (UPI) -- Nobody claimed the Powerball jackpot for the 33rd time in a row on Saturday, pushing the grand prize to $747 million ahead of Monday's drawing.