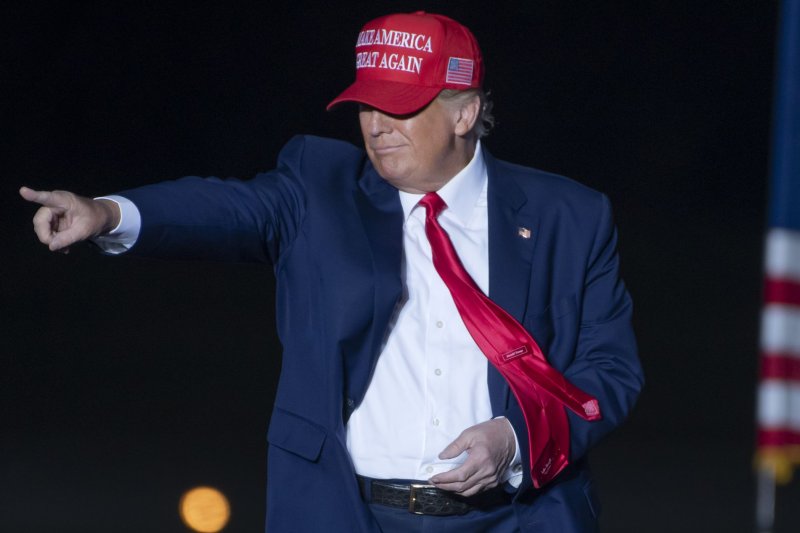 Former President Donald Trump clarified remarks he made about terminating the U.S. rules and regulations, "even those found in the Constitution," on his social media platform Truth Social on Monday. File Photo by Archie Carpenter/UPI | License Photo

Dec. 5 (UPI) -- Former President Donald Trump clarified remarks he made about terminating the U.S. rules and regulations, "even those found in the Constitution," on his social media platform Truth Social on Monday.

Trump received harsh criticism when he responded to a story about Twitter "suppressing" a New York Post story about the contents of a laptop belonging to President Joe Biden's son Hunter Biden in 2020. On Monday, Trump posted that the notion that he wants to "terminate" the Constitution is a lie.

"The Fake News is actually trying to convince the American People that I said I wanted to 'terminate' the Constitution. This is simply more DISINFORMATION & LIES, just like RUSSIA, RUSSIA, RUSSIA, and all of their HOAXES & SCAMS. What I said was that when there is 'MASSIVE & WIDESPREAD FRAUD & DECEPTION,' as has been irrefutably proven in the 2020 Presidential Election, steps must be immediately taken to RIGHT THE WRONG. ONLY FOOLS would disagree with that and accept STOLEN ELECTIONS. MAGA!"

Trump added that an election should go to the "rightful winner" or be redone if it is "irrefutably fraudulent."

The post, which Trump claims was misrepresented by the media, referenced potentially terminating articles of the Constitution directly.

"So, with the revelation of MASSIVE & WIDESPREAD FRAUD & DECEPTION in working closely with Big Tech Companies, the DNC, & the Democrat Party, do you throw the Presidential Election Results of 2020 OUT and declare the RIGHTFUL WINNER, or do you have a NEW ELECTION?" Trump said in a post to his Truth Social platform.

"A Massive Fraud of this type and magnitude allows for the termination of all rules, regulations, and articles, even those found in the Constitution. Our great 'Founders' did not want, and would not condone, False & Fraudulent Elections!"

The White House and Trump's former Vice President Mike Pence spoke out against his proposal.

"I must tell you that I think that everyone that serves in public office, everyone that aspires to serve or serve again, should make it clear that we will support and defend the Constitution of the United States," Pence said while appearing on WVOC radio in Columbia, S.C.

"Attacking the Constitution and all it stands for is anathema to the soul of our nation and should be universally condemned," White House spokesman Andrew Bates said in a statement.

The post came after Elon Musk teased more incoming details about the New York Post story throughout the day on Friday, promising what "really happened" would be revealed.

Musk later referred to a thread from user Matt Taibbi which claimed Twitter took "extraordinary steps" to limit the exposure of the story ahead of the 2020 Presidential Election.

U.S. News // 10 minutes ago
Polar vortex to bring record-challenging cold to Northeast
A shift in the polar vortex will deliver some of the coldest air of the season so far to parts of the northeastern United States from Friday through Saturday, AccuWeather forecasters say.

U.S. News // 7 hours ago
Republican AGs warn Walgreens, CVS over mailing abortion pills
Feb. 1 (UPI) -- Twenty Republican attorneys general are warning Walgreens and CVS that they will face consequences if the U.S. pharmacy giants distribute abortion pills by mail in their states, saying it is a violation of federal law de

U.S. News // 10 hours ago
U.S. blacklists Russian sanctions-evasion network
Feb. 1 (UPI) -- The administration of President Joe Biden blacklisted 10 people and 12 companies on Wednesday as it tightens its financial grip on Russia over its war in Ukraine.