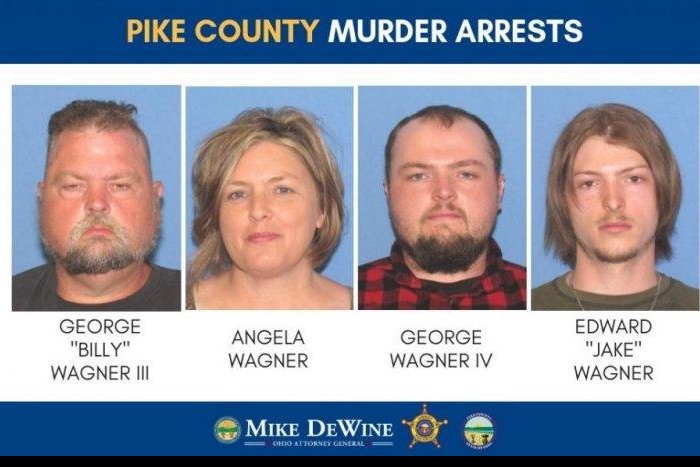 George Wagner IV was found guilty Wednesday of planning and carrying out the 2016 murder of eight members of a family over a custody dispute. File Photo courtesy Mike DeWine/Twitter

Nov. 30 (UPI) -- An Ohio man was found guilty Wednesday of planning and carrying out the 2016 murder of eight members of a family over a custody dispute.

The 12-member jury deliberated for eight hours before finding George Wagner IV guilty on all 22 counts he faced in the killings of eight members of the Rhoden family in 2016 in Pike County, Ohio.

Wagner IV was among four people arrested in 2018 in connection with killing seven members of the Rhoden family and the fiancée of one of the victims. Of those arrested, Edward "Jake" Wagner -- Angela Wagner's son -- had been in a custody dispute with his ex-girlfriend, Hannah Rhoden, one of those slain.

The families had been longtime friends and lived in Pike County in the Appalachian region of the state.

Federal investigators had been observing them since the summer of 2017.

The 13-week trial saw 60 witnesses give hundreds of hours of testimony.

Wagner IV, 31, did not speak to the court and showed no visible emotion after hearing the verdict, which included eight for convictions for aggravated murder, plus conspiracy, aggravated burglary, tampering with evidence and obstructing justice charges.

"Today's verdict does not bring your loved ones back, but I hope it gives you some semblance of peace that one of the evil monsters that did this to your family is being held accountable," said special prosecutor Angela Canepa.

Wagner's mother, Angela Warner pleaded guilty in 2018 to her role in the mass killings and was handed a 30-year prison sentence with no chance of early release.

His brother Jake Wagner confessed last year to shooting five of the Rhoden family victims and pleaded guilty in order to avoid the death penalty.

Their father, George Wagner III has pleaded not guilty.

U.S. News // 1 hour ago
U.S. farm belt expanding its role in renewable natural gas
Feb. 6 (UPI) -- Among the largest RNG facilities in the portfolio of Northern Biogas is an Idaho operation drawing on the waste of thousands of dairy cattle.

U.S. News // 2 hours ago
Dell plans to cut more than 6,600 Jobs due to plummeting PC sales
Feb. 6 (UPI) -- Dell plans to lay off 6,650 workers as the company responds to waning demand for its personal computers -- the latest tech giant forced to downsize as millions of inflation-weary consumers change their spending habits.

U.S. News // 2 hours ago
Buffalo hit with 3.8M earthquake; no damage reported
Feb. 6 (UPI) -- A 3.8-magnitude earthquake near Buffalo, N.Y., Monday morning rattled the nerves of residents around the region but not much else with no immediate damage or injuries reported, officials said.

U.S. News // 15 hours ago
Two officers wounded, suspect killed in gunfight following traffic stop
Feb. 5 (UPI) -- A man was killed in a gun battle with police that erupted after he pulled a firearm and shot two officers attempting to arrest him following a traffic stop early Sunday in southern Indiana.

U.S. News // 22 hours ago
Death row inmate's attorneys called sentence 'justifiable lynching' in 1999 hearing
Feb. 5 (UPI) -- Attorneys for a Black death row inmate in Texas are seeking that his sentence be relieved in light of evidence detailing racists attitudes and actions from his previous counsel and the all-White jury that sentenced him.

U.S. News // 1 day ago
NYPD seeking suspect who shot off-duty officer in the head in robbery
Feb. 5 (UPI) -- A New York Police Department officer is in critical condition after being shot in the head during a robbery attempt as he attempted to buy a vehicle from Facebook Marketplace.

U.S. News // 1 day ago
No jackpot winners in Saturday's Powerball drawing, prize reaches $747 million
Feb. 5 (UPI) -- Nobody claimed the Powerball jackpot for the 33rd time in a row on Saturday, pushing the grand prize to $747 million ahead of Monday's drawing.
Advertisement

More than 2,000 dead in Turkey, Syria after earthquake, powerful aftershocks