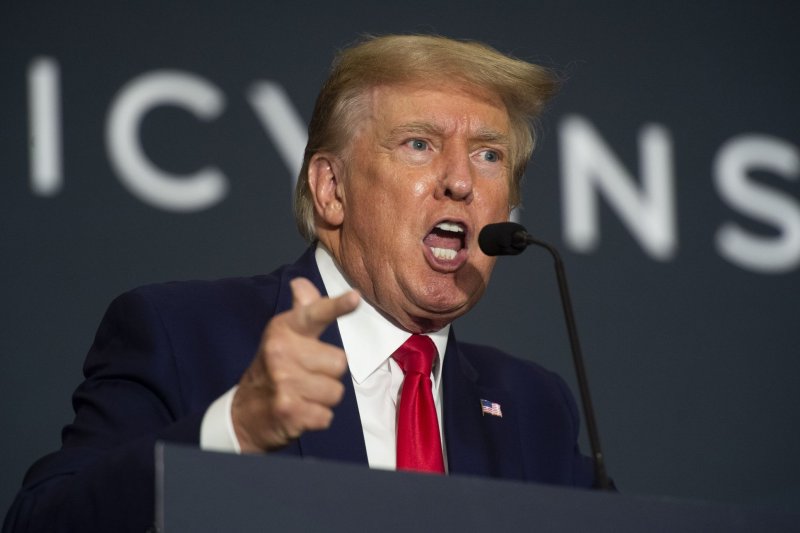 Former President Donald Trump's lawyers are asking the Supreme Court to intervene in a legal battle over his request for a special master to review classified documents seized during an FBI search at his Florida residence. Photo by Bonnie Cash/UPI | License Photo

Oct. 4 (UPI) -- Attorneys for former President Donald Trump asked the Supreme Court Tuesday to intervene in a legal battle over classified records seized during an FBI search at his Mar-a-Lago residence.

The emergency request asks the high court to overturn a lower court ruling and allow a special master to review more than 100 documents marked as classified.

"The unprecedented circumstances presented by this case -- an investigation of the forty-fifth President of the United States by the administration of his political rival and successor -- compelled the District Court to acknowledge the significant need for enhanced vigilance and to order the appointment of a Special Master to ensure fairness, transparency and maintenance of the public trust," the court filing states.

Last month, U.S. District Judge Aileen Cannon granted Trump's request for a special master and appointed U.S. District Judge Raymond Dearie to review the documents in response to Trump's suggestion that the FBI planted evidence during its search of his Florida estate in August.

Cannon also rejected a request from the Justice Department to lift an injunction preventing investigators from reviewing about 100 documents marked as classified until the review was completed.

While Cannon argued some of the documents seized "undisputedly constitute personal property and privileged materials," a federal appeals court overturned her ruling a week later, allowing the Justice Department to proceed with its review. The appeals court ruled that Cannon "erred" in including the classified records.

"Plaintiff has not even attempted to show that he has a need to know the information contained in the classified documents. Nor has he established that the current administration has waived that requirement for these documents," the three appellate court judges wrote.

In new court papers requesting the Supreme Court become involved, Trump's lawyers argued the federal appeals court should not have allowed the Justice Department to appeal a procedural move.

"Nonetheless, the 11th Circuit granted a stay of the Special Master Order, effectively compromising the integrity of the well-established policy against piecemeal appellate review and ignoring the District Court's broad discretion without justification," Trump's lawyers wrote in their request.

"This unwarranted stay should be vacated as it impairs substantially the ongoing, time-sensitive work of the Special Master."

"Any limit on the comprehensive and transparent review of materials seized in the extraordinary raid of a President's home erodes public confidence in our system of justice," the document added.

On Aug. 8, the FBI served a search warrant at Trump's Mar-a-Lago residence and seized more than 11,000 documents, including hundreds that were marked with some form of classification.

The Justice Department released an affidavit, saying it had received a tip from the National Archives and Records Administration in February that they had received 15 boxes of records from Trump's office but that he refused to return other missing records.

Trump has argued that it is his right as a former president to hold some of the documents under executive privilege. The Justice Department claims any documents created while Trump served in office are not his personal property and are presidential records to be held by the National Archives.

"Since President Trump had absolute authority over classification decisions during his Presidency, the current status of any disputed document cannot possibly be determined solely by reference to the markings on that document," Trump's team wrote in their request.

If the Supreme Court grants the request, it could help Trump's case to challenge the FBI's search in court and get the documents returned to him.

It isn't clear whether the court will take up Trump's request, submitted to Justice Clarence Thomas, who oversees cases that come from the 11th Circuit, which includes Florida. Thomas could issue a ruling or refer the request to the entire court.