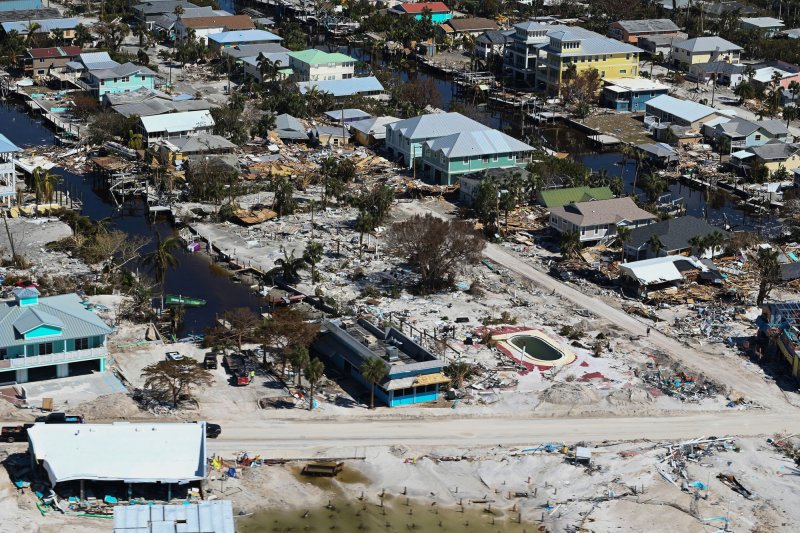 Oct. 4 (UPI) -- President Joe Biden is set to meet with Florida Gov. Ron DeSantis on Wednesday to tour damage from Hurricane Ian, as the storm's death toll continues to climb.

White House press secretary Karine Jean-Pierre said Tuesday that Biden would visit Fort Myers, one of the areas that sustained the most damage when Ian made landfall last week as a Category 4 storm.

Biden and DeSantis have spoken three times over the phone during the past week to coordinate storm response, according to The Hill.

The two men, who have sparred politically and could face off in 2024 presidential race, have worked to put political differences aside to focus on the hurricane response and recovery efforts.

Biden's visit comes amid a rising death toll. According to figures released Monday by the Florida District Medical Examiners, a total of 68 deaths have been attributed to the storm though that number is expected to climb.

At least nine deaths reported Monday in Lee County and some two dozen in Charlotte County have yet to be included in the official tally, which will push the death toll from Hurricane Ian to at least 100 including the four deaths reported in North Carolina.

With a reported 54 deaths, Lee County has tallied the highest number of fatalities and officials have come to its defense as questions swirl over its government's decision to delay issuing evacuations from some vulnerable communities to Tuesday evening.

Kevin Guthrie, director of the Florida Division of Emergency Management, told reporters during a press conference Monday that evacuation orders are at the discretion of local authorities, which "do not have a crystal ball" and make the best decision based on the information available.

"I believe that Lee County and their administration ... made the best decision they felt was right for their community at that time, and I will never second-guess a local emergency manager on their decision to pull an evacuation order," he said.

Storm surges of up to 18 feet submerged streets and the storm knocked out power to more than 2.4 million at peak outage statewide.

By early Tuesday, more than 440,000 tracked customers were still without power, according to poweroutage.us.

Guthrie said those without power in residences connected to standing electrical infrastructure should have their power restored by Sunday.

"That is a goal that they are trying to hit," he said. "This does not include those areas catastrophically hit where there is absolutely no infrastructure, no homes and so on."

Some 829,000 ready-to-eat meals known as MREs and 3.8 million bottles of water have been distributed to residents in need from 34 active points of distribution throughout the state, officials said.

Officials have said there have been some 1,900 rescues so far with Lee County Sheriff Carmine Marceno stating more than 800 of them were conducted in his jurisdiction.

"That's huge," he said Monday in a press conference. "That's 800 people that we were able to touch that were in desperate need of help."

Seemingly in response to the criticism that has been directed at Lee County over its response to the storm, Marceno told those who disagree with their decisions to direct their energy to helping their community.

"These are challenging times to say the very least. There's way too much hate," he said. "How about if you're upset, get out and do something productive and nice. Instead of bashing, instead of being out there spreading negativity, take that energy and walk next door and clean up debris on your neighbor's lawn. Give water out to people that are in need, or food. Be a good person."

When asked directly about the timing of the evacuation order, he said he is "confident" that they got the message out at the right time.

"I'm confident, confident, in the decisions that were made and, like I said yesterday, stand by them and I wouldn't change anything," he said.

In Lee County's Cape Coral on Monday, Gov. Ron DeSantis continued his defense of local officials concerning their decision on evacuation orders saying the issue has been handled "ad nauseam."

"Let's spend a little more time maybe thanking the people that are out there on the front line saving people's lives."