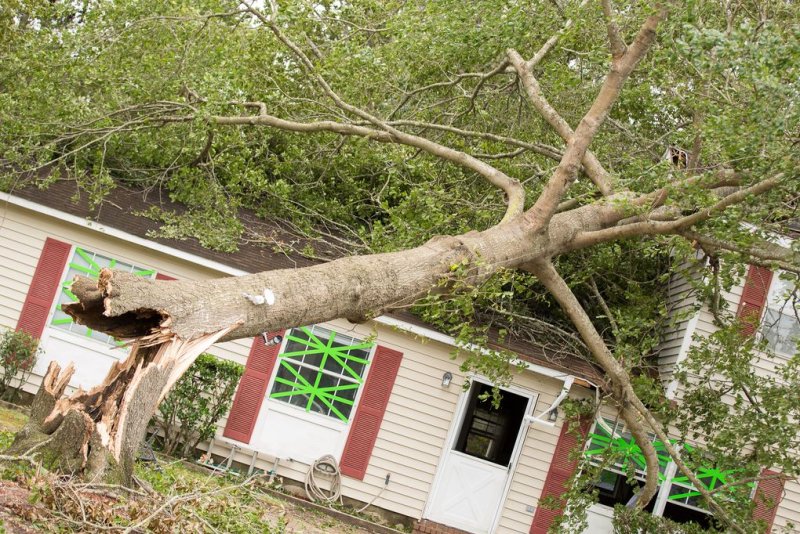 A tree uprooted by strong winds produced by Hurricane Ian is shown lodged against a house in North Charleston, S.C., on Friday. Photo by City of North Charleston/Twitter

Oct. 1 (UPI) -- At least 35 people were killed in the Florida county that absorbed the most direct hit from Hurricane Ian earlier this week, the area's sheriff said Saturday.

"Today we've had over 600 to 700 rescues of people that are in need during this difficult time," Marceno said in a Facebook video post, adding, "with about 35 deaths, unfortunately."

The sheriff didn't specify in the video if all 35 were all directly attributable to the hurricane, which slammed into the Fort Myers area as a Category 4 storm on Wednesday.

"Next of kin and family members have to be notified," he said.

When added to those officially confirmed killed in other parts the state, the storm's overall death toll rose to 52 in Florida, according to ABC News.

Even as Florida residents continued to assess the damage from Ian, President Joe Biden on Saturday issued an emergency declaration for North Carolina as officials in that state and neighboring South Carolina dealt with the still-potent remnants of the storm.

Biden ordered federal assistance to supplement North Carolina's local response efforts due to the emergency conditions resulting from Ian, which made landfall near Georgetown, S.C., at 2:05 p.m. on Friday and moved north through the day -- bringing heavy rain and high winds to the region.

The once-mighty Category 4 hurricane was downgraded to a post-tropical cyclone late Friday as it crossed from South Carolina into North Carolina, with sustained winds reduced to 35 mph.

It is expected to dissipate later Saturday over southern Virginia.

Biden's declaration authorized the Department of Homeland Security and the Federal Emergency Management Agency to coordinate all disaster relief efforts in the area of the storm and to "provide appropriate assistance for required emergency measures" in all 100 North Carolina counties and the Eastern Band of Cherokee Indians.

In South Carolina, residents woke to a relatively calm morning Saturday after the previous day's havoc, when Ian came ashore as a Category 1 hurricane packing maximum sustained winds of 85 mph.

News and social media images showed the streets of downtown Charleston, S.C., completed flooded on Friday, with powerlines down in the city center.

Reports of property damage, flooded homes and businesses and power outages were widespread across the state. Nearly 60,000 homes and businesses remained without power while nearly 325,000 utility customers were affected in neighboring North Carolina as of 8:30 a.m. EDT, according to Poweroutage.com.

Further north, officials said uprooted trees and ponding across highways caused by heavy rains were common in the Piedmont region of Virginia early Saturday as travelers were urged to stay off the roads.

The remnants of Ian were forecast to push north into the region through Saturday with 1 to 3 inches of rain expected. Locally higher amounts up to 5 to 6 inches were possible, especially along and near the Blue Ridge Mountains, the National Weather Service said.

U.S. News // 6 hours ago
Storm with high winds, colder air to blast across Midwest, Northeast
More than 125 million people from the Midwest to the Northeast could face disruptive wind gusts from a powerful storm system from Tuesday to Wednesday.

U.S. News // 6 hours ago
Severe weather to threaten 25 million from Texas to Illinois
Approximately 25 million people in the south-central United States will be at risk for severe thunderstorms on Tuesday alone.