Gradual cooldown is brewing for the sticky Northeast

Aug. 6 (UPI) -- Even though it may take several days to a week to get rolling, a significant cooldown will sprawl from eastern Canada to the northeastern United States for a few days, AccuWeather meteorologists say.

There is even a chance that parts of the Southeast will enjoy some relief from the typical August steambath before the middle of the month.

Parts of New York state and New England experienced their hottest day of the summer as temperatures spiked throughout the Northeast on Thursday. Albany, N.Y., recorded its hottest day since July 21, 2011, as temperatures peaked at 99 F. But temperatures that flirted with the triple-digit mark will gradually come down in the days ahead.

Surging moisture and an uptick in showers and thunderstorms will help to reduce high temperatures in the short-term, though nights will remain muggy across the Northeast. Even as downpours diminish into early next week, sunny intervals will help create some steamy weather.

For residents who struggle with typical August weather, relief is coming. 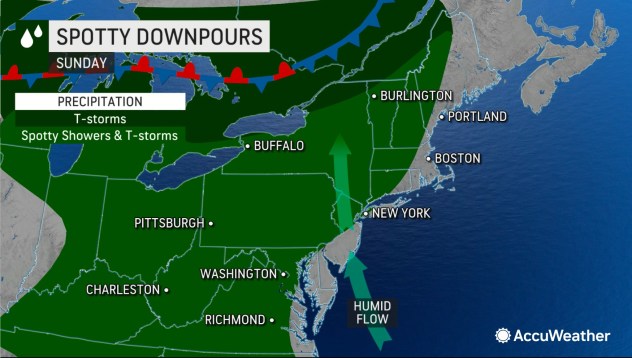 "After some very warm days into the start of next week, big changes in the weather pattern will allow cooler air to push southward into the Northeast as the week progresses," AccuWeather long-range meteorologist Alex DaSilva said.

A southward dip in the jet stream will develop and crack the door for cooler air from Canada to enter the Northeast. This jet stream dip will be slight at first before a major southward plunge evolves late in the week and next weekend, allowing progressively cooler air to settle into the Northeast as well as parts of the Midwest and Southeast states.

The more pronounced a dip the jet stream takes, among other factors, will determine how far to the south temperatures will be influenced by the cooler Canadian air. AccuWeather forecasters believe the dip will be pronounced enough to bring cooler air to much of the Northeast as well as points southward.

"From next Wednesday to Friday, parts of the interior Northeast could see temperatures 6-12 degrees lower compared to this weekend," DaSilva said.

High temperatures will be in the 80s across the interior early in the week, but by the end of the week could top out in the 70s.

"For many people in the Northeast, the cooldown will feel extreme since the past few weeks have been so warm and since humidity levels have been so high of late," DaSilva added. 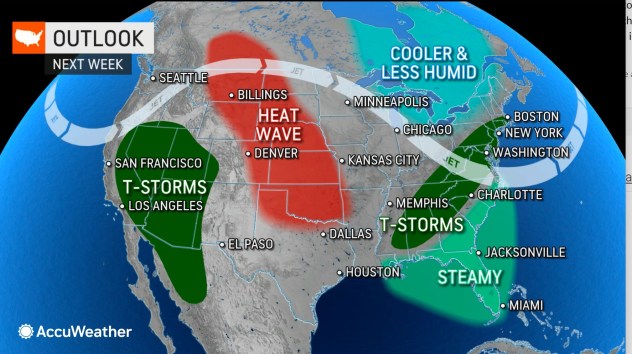 There will be less of a temperature drop along the Interstate 95 zone and the beaches in the Northeast compared to the mountains due to the effects of warm Atlantic waters and widespread urbanization, DaSilva explained. However, even in cities from Boston to New York City and Washington, D.C., temperatures will trend downward by several degrees from early next week to next weekend. Highs near 90 degrees Fahrenheit early in the week could be swapped with highs in the low to mid-80s by the end of the week.

Some people should be able to turn off their air conditioners for a few days, and others could be reaching for a jacket, because nighttime temperatures could dip as low as the 40s over the mountains from northern Pennsylvania to Maine in the week to next weekend. It is possible that many of the northern and western suburbs of the I-95 cities in the Northeast will see morning low temperatures in the upper 50s on a couple of occasions. Some urban areas could slip below 70 degrees at night.

All areas of the Northeast should experience a significant reduction in humidity levels toward the end of next week. Even portions of the Southeast, especially from northern Georgia to the Carolinas and southern Virginia, should have a little break from typical August humidity conditions by next weekend. Temperatures may dip a few degrees at night compared to this weekend, even if fewer clouds by day keep high temperatures at the same or slightly higher level. 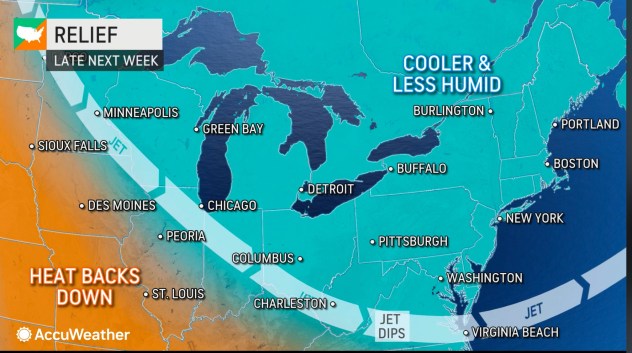 Fans of hot weather should not be dismayed because the cooldown will be temporary.

"Around or shortly after the middle of August, the jet stream is likely to retreat northward, which will allow heat and humidity to build back to the Eastern states," DaSilva said.

The cooldown and shift of the jet stream may come along with drenching showers and thunderstorms that continue to wander slowly from parts of the Ohio Valley and the central Appalachians to the Southeast -- a zone that has been hit hard with torrential rain and disastrous and deadly flooding since late July. Rainfall could be significant enough to aggravate or renew flooding concerns for a time next week.

The Northeast will likely deal with a few rounds of thunderstorms with possible severe weather during the transformation from very warm and humid conditions to cooler and less humid air next week.

Eventually, a batch of rain and thunder may evolve into a storm along the Atlantic coast by next weekend. Then, as that storm wanders out to sea and over warm waters of the Atlantic, it could transition to a tropical or subtropical system over time around mid-month.

U.S. News // 6 hours ago
Rare nor'easter could bring lingering taste of fall
Tumbling temperatures this weekend could be here to stay. Canadian air, combined with a rare nor'easter could keep it feeling like September in the Northeast into next week.

U.S. News // 6 hours ago
Tropical rainfall to funnel into Texas, Mexico threatening flooding
Meteorologists warn that a tropical system will continue to bring flooding rainfall through southern Texas and northern Mexico in the coming days before impacting yet another portion of the United States midweek.