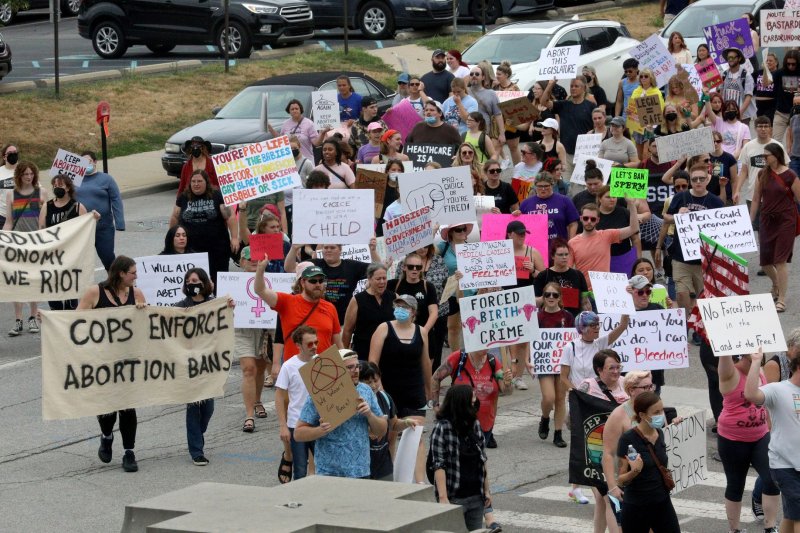 Protesters rallied outside the Indianapolis State Library on July 25 as Vice President Kamala Harris met with Indiana state legislators for a roundtable discussion on abortion rights. The Indiana state legislature on Friday passed two bills, one banning most abortions and the other sending $200 payments to residents of the state. File Photo by John Sommers II/UPI | License Photo

Aug. 5 (UPI) -- The Indiana House on Friday passed two bills -- one which outlaws nearly all abortions and the other which provides a $200 refund to taxpayers while also earmarking $75 million for social service programs for women and children because of the abortion ban.

Senate Bill 1, which bans abortions with limited exceptions for cases of rape and incest and to protect the life of the mother, was amended by the House before it passed with a vote of 62-38 and returned to the upper chamber for consideration, according to the Indiana General Assembly website.

The state Senate filed a motion to concur with the changes and that bill is expected to be sent to Gov. Eric Holcomb's desk to be signed into law.

The Indiana House also passed Senate Bill 2, which was also amended by the lower chamber, with a vote of 93-6 on Friday.

That bill provides Indiana taxpayers with an automatic $200 refund from the state's excess reserves and allocates millions of dollars for crisis pregnancy centers and other services. It also includes moving $1 billion in excess funds to the state's teacher pension fund.

Senate Bill 2 was sent back to the state Senate, which concurred with changes made by the House and has been sent to Holcomb's desk to be signed. Holcomb had initially proposed $225 payments to Hoosiers as part of a plan to provide inflation relief.

"I am extremely pleased to see the House advance Senate Bill 2 that includes returning a billion dollars back to Hoosier taxpayers in the form of an automatic taxpayer refund," Holcomb said in a statement.

"After all, this is the reason I called the General Assembly back into special session and I'm grateful they have acted swiftly and collaboratively to advance this much-needed bill to third reading in the House tomorrow.

"No less important is the package of robust programming to strengthen the health outcomes for Hoosier women and babies. The contents of this current bill now reflect strong contributions from all corners of the General Assembly and I look forward to signing it as soon as it arrives on my desk."

Indiana House Democrats issued a statement after the passage of Senate Bill 1 saying that Republican lawmakers "made women second class citizens" with the passage of the bill.

U.S. News // 39 minutes ago
Southern Baptist Convention reveals Justice Department investigation for sexual abuse
Aug. 12 (UPI) -- The leaders of the Southern Baptist Convention, the largest protestant denomination in the United States, revealed Friday that the church is being investigated for sexual abuse by the Justice Department.

U.S. News // 1 hour ago
Wisconsin state assembly fires 2020 election investigator after Trump fallout
Aug. 12 (UPI) -- Robin Vos, the Republican speaker of Wisconsin's state assembly, announced Friday that he had fired the man he had hired to investigate false claims of voter fraud in the state.

U.S. News // 8 hours ago
Author Salman Rushdie stabbed before speech, rushed to hospital
Aug. 12 (UPI) -- The man who allegedly stabbed international novelist Salman Rushdie during an event in western New York on Friday has been identified by police as Hadi Matar.

U.S. News // 14 hours ago
House passes Inflation Reduction Act on Friday, sends it to Biden's desk
Aug. 12 (UPI) -- The House is expected to pass the Inflation Reduction Act Friday, almost a week after the Senate narrowly approved the legislation that aims to invest billions in climate change, tax and other economy-oriented efforts.