Iliya Fridman, owner of the Fridman Gallery in New York City, stands before a portrait of Ivan Svitlychny by Alla Horska made in 1963, the oldest of dozens of artworks made by women who fled Ukraine since Russia invaded in February. Photo by Adam Schrader/UPI

NEW YORK, July 22 (UPI) -- A Ukrainian soldier wearing combat boots stands at attention with his right arm raised to his brow in a salute, a life-size painting included in a New York City art gallery as part of an exhibit highlighting the work of female artists who have fled the war with Russia.

Lesia Khomenko's work Max in the Army was painted in March, just weeks after Russia invaded Ukraine on Feb. 24, and depicts the artist's partner -- an artist himself who joined the military after the war broke out.

Khomenko, from Kyiv, fled Ukraine and is now in the United States.

The painting is among dozens of pieces from 12 artists on display at the Fridman Gallery in lower Manhattan through Aug. 26 as part of the "Women at War" exhibit from curator Monika Fabijanska.

"Initially, she escaped to western Ukraine to the city of Ivano-Frankivsk, and there she organized temporary studio facilities for other displaced artists," Iliya Fridman, owner of the gallery, told UPI in an interview late Thursday.

Fridman said Khomenko helped about 30 other women from Ukraine continue working on art through the residency she established that will itself become an exhibition at some point.

After establishing that residency in Ivano-Frankivsk, Khomenko moved to Warsaw, where she made work exhibited as part of the Venice Bienniale and has since been granted an artist residency in the United States, where she is living with her 11-year-old daughter.

"She and her partner, Max, who she depicted in the painting in the show, got married online earlier this summer with her from the United States and with him from the front lines in eastern Ukraine," Fridman said.

"She actually just got an opportunity to see him for the first time in five months. She traveled back to western Ukraine, where he was briefly stationed."

Fridman said the exhibit came about after he reached out to Fabijanska, an independent curator known for well-researched exhibits pairing underappreciated older artists with younger artists, last year to offer her a residency with his gallery.

"When the war broke out on Feb. 24, we switched gears and decided to make this show about the war and by Ukrainian artists and their response to the war," Fridman said. "She did the work that normally would take over a year in three months. I've never seen anything like that."

Lesia Khomenko's "Max in the Army," painted in March, just weeks after Russia invaded Ukraine on Feb. 24, is pictured at the Fridman Gallery in New York City. Dozens of artworks made by women who fled Ukraine since the war started are being exhibited. Photo courtesy of Fridman Gallery

Visitors to the gallery are greeted with a 7-minute film from artist Oksana Chepelyk scored by Ukrainian quartet DakhaBrakha called Letter from Ukraine. The film, made in 2014 after Russia annexed Crimea, depicts a mother and child running through the empty streets of an Italian town.

"They're clearly running away from something and they're also out of place," Fridman said. "This is a metaphor for displacement, forced migration and psychological trauma that millions of Ukrainians are experiencing here as we speak, in the United States, in Europe and western Ukraine."

Opposite that film in the gallery is a photograph of anti-tank hedgehogs made from paper in a snowy Ukrainian landscape which Fridman says underscores "how futile the effort to protect human life is in wartime."

Fridman said the exhibit is wholly dedicated to female Ukrainian artists because "the men are fighting" and so have not been able to make new work about the war.

"The male artists in Ukraine have joined the army. Men who are not enlisted are not allowed to leave Ukraine currently so they can be drafted. It's only the women who can leave the country, travel and maintain any semblance of studio practice," Fridman said. 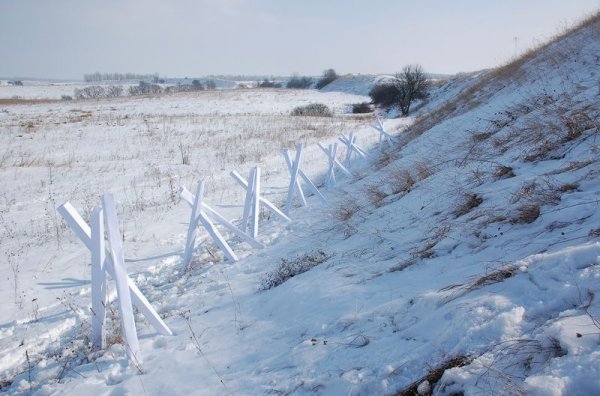 A photograph of anti-tank hedgehogs made from paper in a snowy Ukrainian landscape in 2017, titled "Defense," is seen at the Fridman Gallery in New York City. Photo courtesy Olia Fedorova

He noted that all of the works exhibited were physically made in Ukraine and that two of the artists are still living there. Shipping problems caused by the war even delayed one of the pieces, a sculpture made from cut stone depicting a loaf of bread, from arriving on time to the gallery.

"The artists had friends drive their works to Poland and we had them shipped to the gallery. We had them framed here in New York. The photographs were printed and mounted here," Fridman said.

Zhanna Kadyrova's stone sculpture titled palianytsia was made this year from large stones smoothed by a river in western Ukraine, one of the world's largest exporters of wheat, and resembles a typical bread loaf from the country.

A still from the poetic film "Letter to a Turtledove" is seen at the Fridman Gallery in New York City. Photo courtesy of Dana Kavelina
Advertisement

In a series of 10 drawings, Alevtina Kakhidze describes how her mother would make an annual pilgrimage from the Donbas region, which has been largely held by Russian-backed separatists since the annexation of Crimea in 2014, to unoccupied Ukraine to collect her pension checks.

"Obviously, the Russian-backed separatists were not honoring the pensions that the Ukrainian government had been paying. People had to travel for many hours each time across multiple checkpoints, including a so-called demarcation line that they had to cross on foot," Fridman said.

"They would disembark a bus on one side of the border, walk across and get on a bus on another side of the border. The visual story ends with the last drawing depicting the artist's mother dying of a heart attack standing in line at a checkpoint on her last trip to collect her pension."

Fabijanska wrote in her curation notes about the exhibit that a 20-minute poetic film shown in the gallery's lower level by artist Dana Kavelina documents "the loss of personhood through the torture of repeated rapes that drove women past the limit of humanness" in the Donbas region since World War II.

That film, titled Letter to a Turtledove, was completed in 2020 and includes archival and amateur footage from the 1930s through the 1990s.

Fridman said Kavelina, whom he described as "an exceptional artist," has also been engaged in the research and production of a four-part feature-length film on rape as a weapon of war.

"As art professionals, this is probably the best we can do as a resistance and a contribution to the war effort because while we send money and weapons to Ukraine, not a lot of people in this country know about Ukrainian culture," Fridman said.

"What this war is about is an attempt by the Russian government to erase Ukrainian culture as a unique, independent phenomenon."

Fridman said the exhibit will move on to a gallery at Eastern Connecticut State University, where it will be presented in September and October. He hopes it will continue to tour to other institutions.

"I hope that U.S. audiences learn that there is a separate and unique Ukrainian culture, including visual art," Fridman said.

"It's not easy for Americans to imagine the total devastation that a full-scale war brings about. Multiple generations, tens of millions of people being scarred for life at once. Physically scarred for sure and even way more psychologically scarred."

On Wednesday, the gallery held a screening presented by the New York-based nonprofit organization Locus29 of the 1930 silent film Zemlya by master Ukrainian filmmaker Oleksandr Dovzhenko.

"This is the essential work for Ukrainian cinematography. Everyone knows many directors from Soviet USSR as pioneers, but not everybody knows Dovzhenko," Locus29 founder and director Anna Zinenko told UPI in an interview.

Zinenko added that "right now is the time to show Ukrainian films because imperialistic culture always was pushing down Ukrainian cultural projects" and that Dovzhenko "was the example of that Ukrainian voice."

The film depicts Ukrainian farmers leading peaceful lives until they are disturbed by collectivization -- the Soviet policy of expropriating land from private owners. In the film, some peasants comply voluntarily, while others are forced to give up their property for communal use on collective farms.

The film was banned by Josef Stalin's Soviet Union just eight days after it was released and the original negatives the film was recorded on were destroyed in a German air raid during World War II.

Zinenko said the film mirrors the current situation in Ukraine and said that farming "is going to be a very touchy topic soon."

"The harvest has stopped. They cannot keep working on harvesting the grain and also the part, the occupied part of Ukraine, whatever they produce they're going to send to Russia again, so it's very identical and Europe is suffering too because of this situation," she said.

Though Zemlya was created as a silent film, it was scored by the Ukrainian group DhakaBrakha in 2012, which Zinenko said made the film "a double masterpiece."

Zinenko's mother, a native of Kyiv, was in the audience when the film was screened Wednesday. She had escaped Ukraine just weeks after the war broke out with her daughter's help.

"Almost all my friends are in Ukraine right now, and I am constantly in touch every day, a few times per day, with them because this is an abnormal situation, where you have to check with your friends and see if they are still alive," Zinenko said.

"We keep trying to live the life, but this is a summer that has no smell. This summer that should be joyful for us full of watermelon, but we are all basically checking each other if we are alive. But we also feel guilty for any joyful moments.

U.S. News // 25 minutes ago
Seven students, driver injured in New York school bus crash
Dec. 1 (UPI) -- A bus crash in Spring Valley, N.Y., has injured seven yeshiva students ad their driver. The crash occurred on a road that is often used as a shortcut by busses.

U.S. News // 3 hours ago
Key inflation number cools; Biden says economic plan is working
Dec. 1 (UPI) -- In a sign that U.S. inflation is cooling, the core personal consumption expenditures price index for October rose 0.2% for the month, up 5% compared to a year ago. That's lower than September's rise of 0.5%.