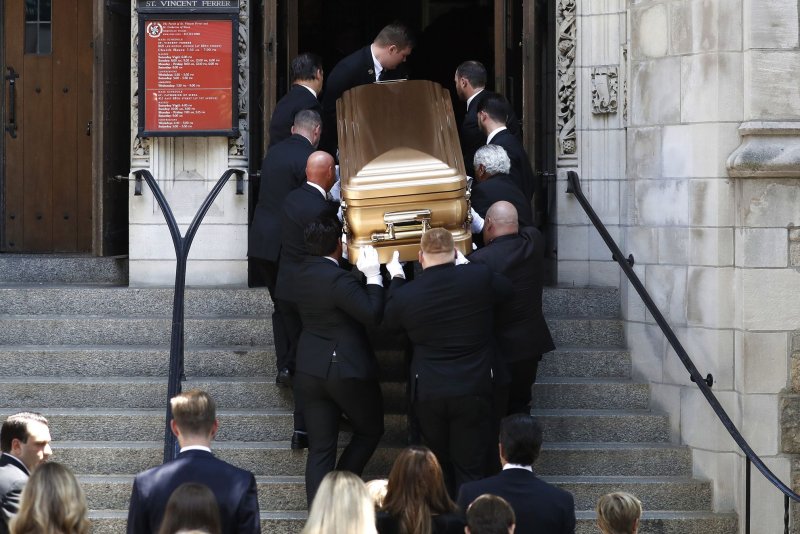 July 20 (UPI) -- Ivana Trump, the glamorous 1980s businesswoman and first wife of former President Donald Trump, was remembered Wednesday as "a force of nature" at a private service in New York City.

Former President Trump arrived at St. Vincent Ferrer Catholic Church in a black suit amid heavy security, along with their children, Ivanka, Donald, Jr., and Eric, who mourned their mother in eulogies.

"She had brains; she had beauty," Eric Trump said. "She was the embodiment of the American dream... She was a force of nature."

She "could beat any man down the slopes, any woman on the runway," Eric Trump told mourners about his mother, who was a former model and onetime professional skier.

"She ruled the three of us with an iron fist but also with a heart of gold," he said.

Ivanka Trump called her mom a trailblazer. "Growing up, my mother didn't tell me a woman could do anything she wanted to -- she showed me," she said.

"My mother once told me there was nothing she couldn't do in heels," Ivanka said.

About 100 mourners attended the invite-only "Celebration of Life." Ivana's three children, their spouses and grandchildren could be seen standing outside the church as pallbearers carried Ivana's casket.

Former First Lady Melania joined her husband and their son Barron at the service. Donald Trump's daughter Tiffany Trump, with his second wife Marla Maples, was also there.

Ivana Trump, 73, was married to business mogul and former President Donald Trump from 1977 to 1992. She died last week after a fall at her Manhattan home.

Ivana Trump -- who is the mother of Ivanka, Donald Jr. and Eric -- died as a result of blunt impact injuries, the coroner said.

Born in Czechoslovakia in 1949, Ivana Trump became a ski racer during the 1970s and later evolved into a businesswoman after she met Donald Trump in 1976.

Ivana had her own clothing line and helped design the interiors of the Grand Hyatt Hotel and Trump Tower in New York City. Also a best-selling author, she worked for the Trump Organization as a senior executive and started her own lifestyle magazine in the late 1990s.

Donald Trump said in a statement after her death that Ivana was a "wonderful, beautiful, and amazing woman, who led a great and inspirational life."

Ivana Trump dies at age 73: a look back

U.S. News // 2 hours ago
Coastal storm to bring days of dreary weather along Northeast beaches
AccuWeather meteorologists are tracking a new, non-tropical storm off East Coast of U.S., fed in part by Ian, they say will bring pounding surf, coastal flooding and windswept rainfall from Virginia to Long Island.