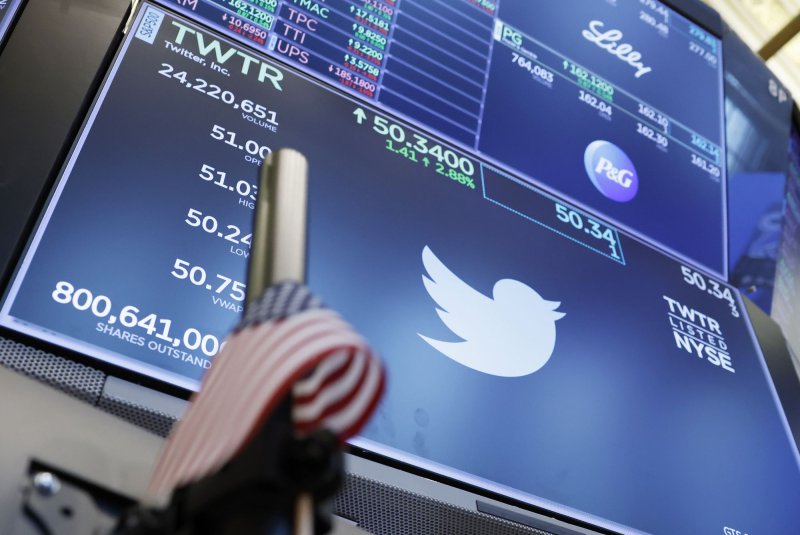 In the suit, Twitter accuses Elon Musk of bullying and making efforts to "trash the company, disrupt its operations, destroy stockholder value and walk away" from an agreement to buy the platform for $44 billion. File Photo by John Angelillo/UPI | License Photo

July 13 (UPI) -- Shares of Twitter stock -- which have fallen in value over the past several days -- rebounded some on Wednesday after the social platform sued Elon Musk to try and force him to stick with his agreement to buy the company.

Musk, the world's wealthiest person by many measures, announced almost a week ago that he was backing out of his deal to acquire Twitter for $44 billion. The news sent Twitter shares spiraling this week on the New York Stock Exchange.

Musk said he pulled out because Twitter won't reveal how many of its daily monetizable user accounts are phony or spam accounts -- a claim that the company denies.

Tuesday, Twitter moved to put legal pressure on Musk by suing him in Delaware for breach of contract. The company asked for an expedited hearing.

"Expedition is essential to permit Twitter to secure the benefit of its bargain, to address Musk's continuing breaches, and to protect Twitter and its stockholders from the continuing market risk and operational harm resulting from Musk's attempt to bully his way out of an airtight merger," Twitter said in the suit according to CNN.

Musk, who owns SpaceX and Tesla, announced almost a week ago that he was abandoning his agreement to buy Twitter because he hasn't received critical data from the company. Twitter denies the claim. File Photo by Joe Marino-Bill Cantrell/UPI
Advertisement

Twitter accuses Musk of bullying and making efforts to "trash the company, disrupt its operations, destroy stockholder value and walk away" from the deal.

Musk's attorneys say Twitter spoiled the agreement by violating "multiple provisions" and has kept its data on phony "bot" accounts from the billionaire entrepreneur. The company said earlier this year that about 5% of its daily monetizable users are bot accounts, but Musk wanted more data.

By 11:30 a.m. EDT on Wednesday, Twitter shares were up 6.5% in value to $36.28. The shares were worth more than $51 in April immediately after Twitter announced that it would accept Musk's $44 billion offer.

Musk, who has 101 million followers on Twitter, previously said he wanted to buy the company because it has failed to reach its full potential. The deal became controversial, particularly when Musk said that he planned to let former President Donald Trump return to the platform.

Trump was banned in early 2021 for inciting violence related to the Jan. 6 U.S. Capitol attack.

U.S. News // 3 hours ago
The Onion files Supreme Court brief defending man arrested for parody
Oct. 4 (UPI) -- The satirical publication The Onion took an uncharacteristic dive into a serious issue by filing an amicus brief at the U.S. Supreme Court in support of an Ohio man who faced criminal charges over a parody Facebook page.