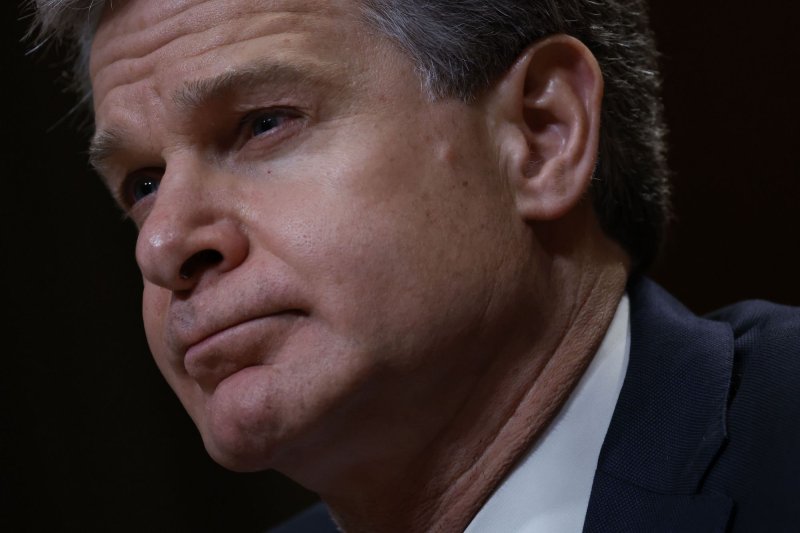 Christopher Wray, director of the Federal Bureau of Investigation, spoke in London on Wednesday along side his British counterpart, . File Photo by Ting Shen/UPI | License Photo

July 6 (UPI) -- The heads of U.S. and British domestic intelligence warned business leaders on Wednesday of the threat the Chinese Communist Party poses to their interests, calling on their assistance to protect Western economies, institutions and democratic values.

In a show of unity, FBI Director Christopher Wray and MI5 Director General Ken McCallum spoke to the leaders during an event in London, which marks the first time the heads of their agencies have delivered a speech together.

The two intelligence directors said that while the world faces several threats, including that of Russia, the largest to Western economic and national security is that posed by the Chinese Community Party.

They told the business leaders that Beijing is set on stealing their technology with the intent to use it to undercut their business and dominate the market.

"Most of what is at risk from Chinese Communist Party aggression is not, so to speak, my stuff. It's yours," McCallum said. "The world-leading expertise, technology, research and commercial advantage developed and held by people in this room, and others like you."

Wray said they have seen regional bureaus of China's Ministry of State Security key in on innovation in specific Western companies from those in big cities to small towns including Fortune 100 companies to start-ups in industries from aviation to artificial intelligence and pharmaceuticals.

"We've even caught people affiliated with Chinese companies out in the U.S. heartland, sneaking into fields to dig up proprietary, genetically modified seeds, which would have cost them nearly a decade and billions in research to develop themselves," he said.

He said Chinese state-sponsored theft includes traditional and cyber thievery but also through Chinese companies, which are often owned by Beijing, making partnerships with Western corporations in order to steal their valuable technology.

"So, when you deal with a Chinese company, know you're also dealing with the Chinese government," he said.

He also warned that China is working to insulate its economy from potential sanctions that democratic nations would impose on Beijing if it were to take Taiwan by force, as it has vowed to do.

He said Beijing is learning lessons from how countries are reacting to Russia's invasion of Ukraine, and that the business leaders should be watching that situation as well, citing a Yale study that said Western businesses have already lost $59 billion in Russia due to the conflict.

"And if China does invade Taiwan, we could see the same thing again, at a much larger scale," he said.

McCallum also warned of the growing risk of doing business in China, stating that the widespread Western assumption that growing prospering within China and increasing connectivity with the West would lead to greater political freedom has shown to be false.

"The Chinese Communist Party is interested in our democratic, media and legal systems. Not to emulate them, sadly, but to use them for its gain," he said.

McCallum added that his agency is running seven times as many China-related investigations as they did in 2018 while the Justice Department has said that about 80% of all economic espionage prosecutions in the United States allege conduct that would benefit China.

U.S. News // 2 hours ago
Trump's hold on GOP to be tested Tuesday in Wyoming, Alaska primaries
Aug. 16 (UPI) -- Two states hold primary elections on Tuesday, and both will include ballots for two moderates who voted to hold Donald Trump accountable for inciting the Jan. 6 U.S. Capitol attack.

U.S. News // 12 hours ago
Justice Department opposes release of Trump search affidavit
Aug. 15 (UPI) -- The Justice Department has opposed the release of a sworn affidavit, describing the reason behind the FBI's search of former President Donald Trump's home at Mar-a-Lago, arguing it would jeopardize the investigation.
Advertisement