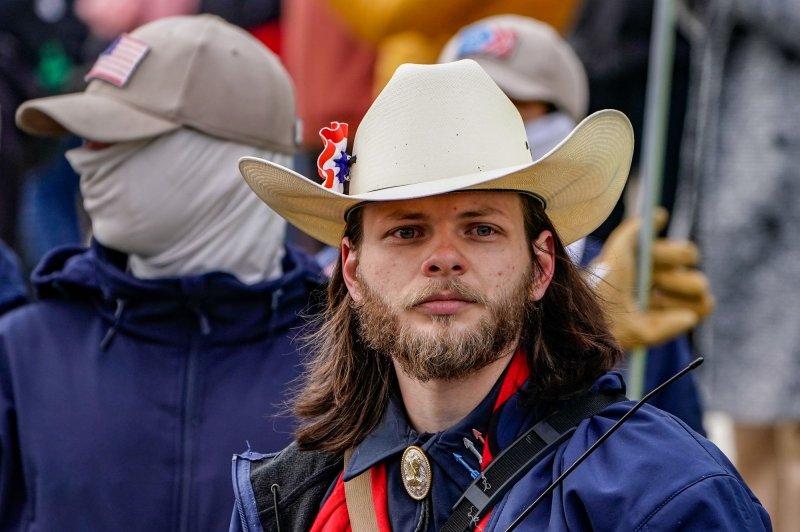 Thomas Ryan Rousseau, founder of the white nationalist hate group Patriot Front, marches ahead of thousands of pro-life and anti-abortion advocates during the 49th Annual March for Life in Washington D.C. in January. File Photo by Jemal Countess/UPI | License Photo

June 12 (UPI) -- Idaho police officers have arrested 31 people believed to be tied to the white nationalist group Patriot Front for conspiracy to riot at a Pride event in the city of Coeur d'Alene.

Police Chief Lee White told KXLY that a citizen had alerted police who developed probable cause to arrest them for possessing riot shields, smoke grenades and other gear.

Initial information showed that just one of those arrested was from Idaho while the rest had traveled from states as far as Virginia with the intention of rioting, according to KXLY.

Patriot Front, founded in the aftermath of the deadly white supremacist rally in Charlottesville, Va., in 2017, has been called a hate group by the Southern Poverty Law Center.

Rousseau was among those arrested in Idaho and he has since been released on bond from the Kootenai County Jail, CNN reported.

The Southern Poverty Law Center has noted that Rousseau and his followers were frustrated with the organizers of the Unite the Right protest in Charlottesville to prevent the displaying of swastikas and other Nazi imagery.

Rousseau and Patriot Front have instead sought to brand themselves as a mainstream, patriotic movement though still "staunchly white supremacist," according to the Southern Poverty Law Center.

An FBI spokesperson told CNN that the federal agency is helping the local police with their investigation.

U.S. News // 6 hours ago
National Archives tells House Oversight Committee it is still missing records from Trump officials
Oct. 1 (UPI) -- The National Archives and Records Administration penned a letter to the House Oversight Committee on Friday revealing that it has not received certain records from the administration of former President Donald Trump.

U.S. News // 9 hours ago
3-year-old killed during road rage incident in Chicago
Oct. 1 (UPI) -- A 3-year-old boy was shot and killed while in a car with his mother on the Southwest side of Chicago.

U.S. News // 17 hours ago
At least 35 killed by Hurricane Ian in Lee County, Fla., sheriff says
Oct. 1 (UPI) -- At least 35 people were killed in the Florida county that absorbed the most direct hit from Hurricane Ian earlier this week, the area's sheriff said Saturday.

U.S. News // 13 hours ago
Forecasters monitoring what's next in the Atlantic in wake of Ian
As Ian unravels across the mid-Atlantic states, meteorologists are monitoring the Atlantic basin where new tropical storm development may soon happen.