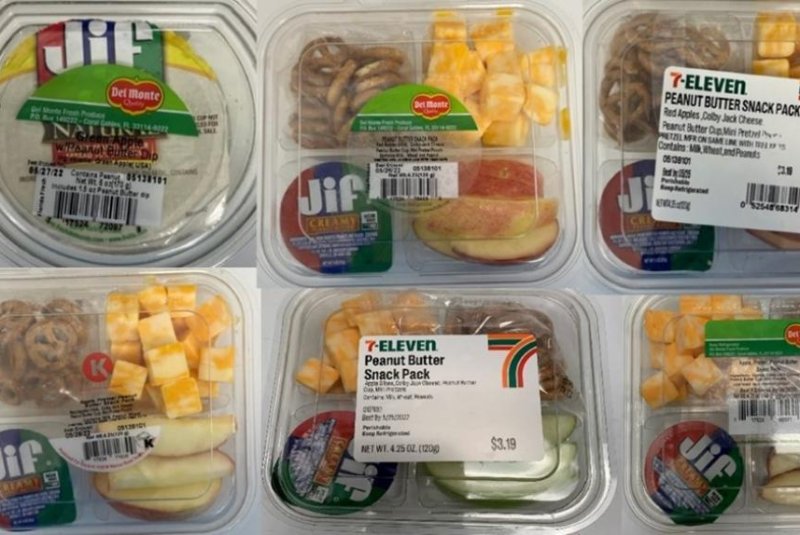 Snacks including, fudge and packaged apple slices made with Jif peanut butter have been recalled amid an outbreak of salmonella linked to the peanut butter. Photo courtesy U.S. Food and Drug Administration

May 25 (UPI) -- Various snacks made with Jif peanut butter have been recalled amid an outbreak of salmonella in multiple states.

The U.S. Food and Drug Administration on Wednesday released a compilation of recalls associated with Jif peanut butter after J.M. Smucker Co. last week announced a recall for select varieties of the product sold in the United States and Canada.

On Monday, the Centers for Disease Control and Prevention released a safety alert announcing that 14 people throughout 12 states had been infected with salmonella, including two who had been hospitalized.

The CDC added, however, that the true number of people infected is likely higher and the outbreak may not be limited to states with currently known illnesses as some people recover without medical care and are not tested for salmonella.

Coblentz Chocolate Co. recalled products including chocolate, fudge, caramel corn and assorted creams containing Jif peanut butter sold between Nov. 12, 2021, and May 21, 2022, and has halted use of Jif peanut butter.

Country Fresh said it has recalled fresh-cut fruit snack trays and fruit snack cups that included Jif peanut butter that were sold under brands such as Giant, Market32, Snack Fresh, Snack Sensations and Wegmans in 19 states in the Eastern United States and Washington, D.C.

Cargill on Monday announced a recall of 795 8-ounce boxes of candy and other snacks made with the recalled peanut butter sold through the Wilbur Chocolate retail store in Lititiz, Pa., and online at Wilburbuds.com.

Giant Eagle also recalled GetGo branded apple slices with the recalled peanut butter sold through May 13 at GetGo gas stations in Indiana, Ohio, Pennsylvania and West Virginia, bearing the UPC code: 33034 93770 6 and best-if-used by dates through May 29, 2022.

U.S. News // 19 hours ago
Google says it will delete data of those who visit abortion clinics
July 2 (UPI) -- Google announced Friday it will delete information including whether a person visited an abortion clinic as bans on terminating pregnancies grow in the wake of the Supreme Court's decision to overturn Roe v. Wade.

U.S. News // 21 hours ago
Man sought in shooting death of mom pushing baby stroller arrested in NYC
July 2 (UPI) -- The father of an infant whose mother was shot dead while pushing the baby's stroller on the Upper East Side of New York City earlier this week has been arrested.

U.S. News // 1 day ago
Popular Minecraft gamer Technoblade dies of cancer at 23
July 2 (UPI) -- Technoblade, a massively popular gamer known for his Minecraft videos on YouTube, has died from cancer at the age of 23, his family announced Thursday.
Advertisement