Starbucks permanently pulls presence from Russia due to war in Ukraine

Starbucks announced in March that it would temporarily close Russian locations due to the war in Ukraine. Several other U.S. businesses have also withdrawn entirely from Russia. File Photo by Stephen Shaver/UPI | License Photo

May 23 (UPI) -- Coffee behemoth Starbucks announced on Monday that it's exiting the Russian market -- and ending a 15-year relationship -- over the bloody war in Ukraine.

The company says it will end its brand presence in all 130 of its Russian locations, and will pay its 2,000 employees for six months to help them transition to another job.

Like many major food chains, Starbucks licenses its locations but does not operate them. 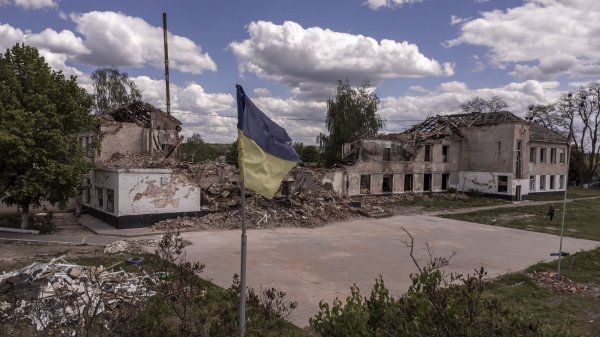 A Ukrainian flag stands in front of a school in Merefa, Ukraine, on May 18. Since the fighting began in February, a number of companies have withdrawn entirely from Russia. Photo by Ken Cedeno/UPI

Starbucks announced in March that it would temporarily close Russian locations and halt shipments to them due to the war in Ukraine. Several other U.S. businesses have also withdrawn entirely from Russia.

Starbucks has been in Russia since 2007.

Starbucks said in March that its licensing partners all agreed to suspend operations.

Last week, McDonald's said that it was pulling out of Russia over the war. It sold all locations to Siberian licensee Alexander Govor.

Ukrainians return to towns around Kharkiv after Russian retreat

A local woman walks down a dirt road on Monday as life tries to return to normal after Russian shelling hit the small town of Biskvitne, Ukraine, east of Kharkiv. Photo by Ken Cedeno/UPI | License Photo

U.S. News // 9 hours ago
Man sought in shooting death of mom pushing baby stroller arrested in NYC
July 2 (UPI) -- The father of an infant whose mother was shot dead while pushing the baby's stroller on the Upper East Side of New York City earlier this week has been arrested.

U.S. News // 13 hours ago
Bodies of mother, 3 children recovered from Minnesota lake
July 2 (UPI) -- Minnesota police are investigating a possible triple-homicide after the bodies of a woman and her three children were recovered from a lake in Ramsay County.