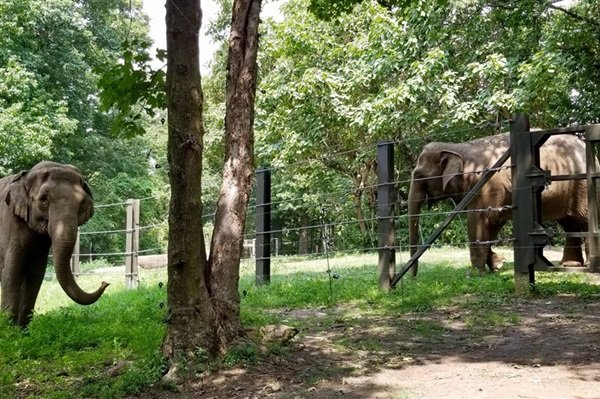 Happy and Patty are shown at the Bronx Zoo. File Photo courtesy of Wildlife Conservation Society

May 19 (UPI) -- New York's highest court is expected to rule in the case of Happy, an Asian female elephant at the Bronx Zoo, to determine if she should be free from unlawful captivity similar to humans.

Steven Wise, animal rights attorney and president of the Nonhuman Rights Project (NRP), an animal rights group, has argued that Happy is autonomous, cognitively complex and deserves the same legal protection humans have against unlawful imprisonment.

"What we're saying is that she has a right to bodily liberty and that that makes her no longer a thing," Wise told The Washington Post. "She's a person."

Happy's attorneys have offered as evidence of her intelligence that she passed a self-awareness, mirror self-recognition test in 2005. An article in the Proceedings of the National Academy of Sciences (PNAS) journal noted that such ability has long appeared limited to humans and apes.

They have also argued that Happy is lonely and not happy in 1.15-acre captivity and are seeking to move her from the Bronx Zoo to one of the country's two elephant sanctuaries where they say she would have more space and interaction with other elephants.

The Bronx Zoo, on the other hand, has argued that Happy is treated compassionately, has had contact with another elephant, and has bonded with zookeepers.

Happy's attorneys' legal argument has focused on the writ of habeas corpus, which is used to determine if a person's imprisonment is unlawful.

The Bronx Zoo argued in its statement that this is a misuse of the writ of habeas corpus.

"The court should not issue a writ of habeas corpus in a case such as this --where the holding of the elephant is not illegal; the relief sought is not actual release from confinement; and the writ is filed regarding a non-human animal. Habeas corpus is a summary proceeding with one remedy intended for people: release from illegal confinement."

Currently, Happy's living space at the Bronx Zoo is separated by a fence from the zoo's other elephant, and Mary Dixon, a zoo spokeswoman, said Wednesday that the two elephants touch trunks, smell each other, and communicate, the Post reported.

The New York Court of Appeals is expected to make a decision in the coming months.

Happy, who was born in the wild in 1971, has lived at the Bronx Zoo since 1977, according to a profile on the NRP website.

According to the New York Times, she was probably captured from Thailand, along with six other calves, possibly from the same herd.

Happy was imported to the United States in the early 1970s and sold for $800 to the now-defunct Lion Country Safari in Laguna Hills, Calif., which named the calves after Snow White's seven dwarfs, according to the NRP profile. Happy was later relocated to the still operational The Lion Country Safari in Loxahatchee, Fla., before she was moved to the Bronx Zoo in 1977 with Grumpy, who was attacked by two other elephants there and euthanized in 2002.

RELATED Bonobo safely back in enclosure after escape at Belgian zoo

U.S. News // 11 hours ago
Gunman kills two civilians, injures three officers in Texas shootout
July 3 (UPI) -- A Texas gunman killed two people and injured a third Saturday before a shootout with law enforcement that left three police officers injured in Haltom, which is part of the Dallas-Fort Worth region

U.S. News // 1 day ago
Google says it will delete data of those who visit abortion clinics
July 2 (UPI) -- Google announced Friday it will delete information including whether a person visited an abortion clinic as bans on terminating pregnancies grow in the wake of the Supreme Court's decision to overturn Roe v. Wade.

U.S. News // 1 day ago
Man sought in shooting death of mom pushing baby stroller arrested in NYC
July 2 (UPI) -- The father of an infant whose mother was shot dead while pushing the baby's stroller on the Upper East Side of New York City earlier this week has been arrested.