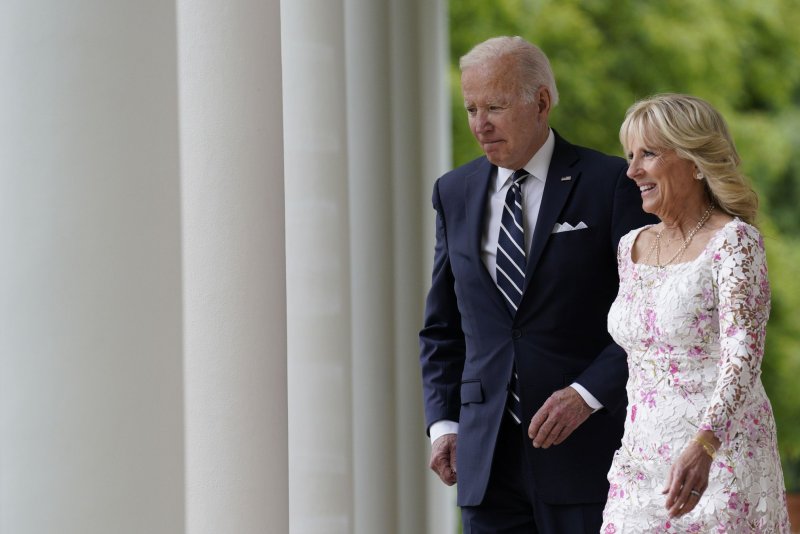 President Joe Biden and first lady Jill Biden are seen walking to the Rose Garden of the White House in Washington, D.C., on May 5. On Tuesday, both visited Buffalo, N.Y., to meet with authorities and relatives of the victims of last weekend's shooting. Photo by Yuri Gripas/UPI | License Photo

May 17 (UPI) -- President Joe Biden said White supremacy is a "poison" that "has no place in America" during a trip to Buffalo, N.Y., on Tuesday to visit with families of the victims killed in a mass shooting over the weekend.

The president and first lady Jill Biden also met with community leaders and visited a memorial site for the victims, where they added a bouquet of flowers and had a moment of silence.

The attack on Saturday at the TOPS Market killed 10 people and injured three others. It was the deadliest of multiple attacks that occurred in the United States over the weekend. Police say they're investigating the shooting as a hate crime.

Authorities say the suspected shooter, 18-year-old Payton Gendron, was motivated by hate when he opened fire at the store. He'd written a lengthy manifesto before the attack in which he communicated racist views against people of color, they said. He traveled about 200 miles to Buffalo from his home in another part of New York.

Joe Biden called the shooting an act of domestic terrorism.

"White supremacy is a poison, it's a poison ... running through our body politic," he said. "And it's been allowed to grow and fester right before our eyes. No more, no more. We need to say as clearly and as forcefully as we can that the ideology of White supremacy has no place in America. None."

"In America, evil will not win, I promise you. Hate will not prevail. White supremacy will not have the last word. The evil did come to Buffalo and it's come to all too many places, manifested in gunmen who massacred innocent people in the name of hateful and perverse ideology, rooted in fear and racism. It's taken so much," the president added.

Joe Biden urged Americans to "reject the lie" some politicians and pundits have spread that elite liberals are seeking to gain more power by encouraging immigrants and people of color to vote -- an idea known as the replacement theory. The gunman in the Buffalo shooting espoused the theory in his 180-page racist manifesto.

"I call on all Americans to reject the lie, and I condemn those who spread the lie for power, political gain and for profit," the president said.

FBI agents investigate the scene of the mass shooting on Saturday at a supermarket in Buffalo, N.Y., that killed 10 people. Photo by Aaron Josefczyk/UPI

A manager at the store said that she'd kicked Gendron out of the building on Friday, the day before the attack, because he'd been bothering customers.

Shonnell Harris Teague told ABC News that Gendron had sat on a bench outside the store for several hours with a camper bag on his back, dressed in the same camouflage outfit that he wore during the assault Saturday.

Authorities said they believe that Gendron had planned on carrying out more shootings in other locations before he was stopped at the TOPS store.

Investigators were expected to release more information about the shooting later Tuesday.

A group prays in the street on Sunday near the site of the mass shooting on Saturday at a Tops supermarket in Buffalo, N.Y. Photo by Aaron Josefczyk/UPI | License Photo

U.S. News // 9 hours ago
Officials close 2 Long Island beaches after unprecedented shark attack
July 3 (UPI) -- Officials in Long Island closed two beaches to swimming on Sunday after a lifeguard participating in a training exercise was attacked by a shark.

U.S. News // 22 hours ago
Gunman kills two civilians, injures three officers in Texas shootout
July 3 (UPI) -- A Texas gunman killed two people and injured a third Saturday before a shootout with law enforcement that left three police officers injured in Haltom, which is part of the Dallas-Fort Worth region