May 13 (UPI) -- Giving her final briefing as White House Press Secretary, Jen Psaki on Friday said she was grateful for the example of grace and integrity set by President Joe Biden and first lady Jill Biden.

Psaki, 43, is departing after 16 months on the job as the administration's chief spokeswoman. She will be succeed by Karine Jean-Pierre, who has served as deputy principal press secretary, and will be the first Black and the first openly gay person in the role.

"People often ask me whether Washington is rotten and corrupt here, and nothing good happens, and we just all argue with each other," Psaki said during Friday's briefing. "Having done this job, I believe the absolute opposite is true."

When she discussed taking the job with the Bidens, the conversation centered around the importance of restoring integrity, respect and civility to the White House.

"That doesn't mean that we haven't let our Irish side show -- mine and the president's, as well, from time to time," Psaki said. "I recognize that. But on my best days, as I look back, I hope I followed the example of integrity and grace that they have set and do set for all of us every day."

Psaki said the president and the first lady practice what they told her about integrity, respect and civility.

"They have integrity, grit, commitment to try even on the hardest days and worst days to make the world better for the American people. And I am very grateful to them."

Psaki thanked her co-workers, her husband and the White House press corps.

"You have challenged me, you have pushed me and debated me, and at times we have disagreed," she said, "That is democracy in action. That is it working."

She said White House reporters play a pivotal role and without accountability and debate, the government is not as strong.

The White House announced earlier this month that Psaki would be leaving amid rumors that she was in talks for a broadcasting role at MSNBC.

"Jen Psaki has set the standard for returning decency, respect and decorum to the White House briefing room," the president said at the time. "I want to say thank you to Jen for raising the bar, communicating directly and truthfully to the American people, and keeping her sense of humor while doing so." 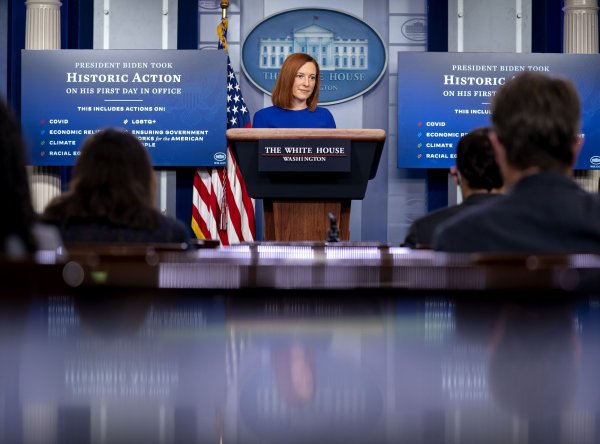 Psaki was chosen by the president to be his main press officer a few weeks after the 2020 election and she was part of what Biden hailed as the "first senior White House communications team comprised entirely of women."

She joined the administration after holding various roles in former President Barack Obama's White House, including communications director. She has also been a CNN contributor.

As press secretary, Psaki handled White House media response to events including the Omicron COVID-19 surge, the U.S. withdrawal from Afghanistan and Russia's invasion of Ukraine. She often had humorous clashes with Fox News reporter Peter Doocy during press briefings, which produced moments that were called "Psaki bombs" across social media.

During a breakfast sponsored by the Christian Science Monitor, Psaki told reporters that one of the most difficult aspects of the role was its high-profile nature.

"The thing that has been the hardest personally is I've had threats," she said. "I have had nasty letters, texts to me with my personal address, the names of my children. It crosses lines, and that's when it becomes a little scary."

Jean-Pierre has often filled in for Psaki or was the main White House press liaison when Psaki wasn't present. 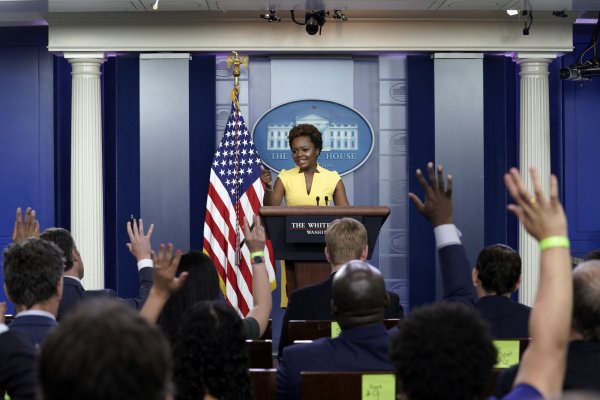 White House principal deputy press secretary Karine Jean-Pierre speaks during a press briefing at the White House on May 26, 2021. She often filled in for Jen Psaki as chief White House spokeswoman. File Photo by Yuri Gripas/UPI

"Karine not only brings the experience, talent and integrity needed for this difficult job, but she will continue to lead the way in communicating about the work of the Biden-Harris administration on behalf of the American people," Biden said when the change was announced.

"It's a real honor to be standing here today. I appreciate the historic nature," she said at the time. "But I believe that being behind this podium, being in this room, being in this building, is not about one person. It's about what we do on behalf of the American people."

Jean-Pierre, 47, also worked with Obama before joining Joe Biden in the White House, serving as Southeast regional political director for Obama's 2008 presidential campaign and deputy battleground states director for his re-election bid in 2012.

She also worked on John Edwards' presidential campaign in 2004 and as campaign manager for the American Civil Liberties Union's Reproductive Freedom Initiative.

U.S. News // 43 minutes ago
Archbishop denies House Speaker Pelosi communion over abortion stance
May 20 (UPI) -- The head of the Archdiocese of San Francisco told House Speaker Nancy Pelosi on Friday that she may no longer receive communion over her stance on abortion.

U.S. News // 6 hours ago
ATF: Privately made firearms make it harder to reduce illegal access to guns
May 20 (UPI) -- Increased output by gun manufacturers as well as privately made firearms drove an exponential increase in firearms available in the United States over the past two decades, according to a new study.

U.S. News // 6 hours ago
Shooting 'like crazy' leaves two dead, eight wounded in Chicago
May 20 (UPI) -- A mass shooting on Chicago's north side Thursday night left two people dead and eight wounded. At least one person was arrested and a weapon was recovered, according to Chicago police.
Advertisement