Traders work at the opening bell at the New York Stock Exchange on Wall Street in New York City on Monday. The Dow fell more than 500 points to start the day. Photo by John Angelillo/UPI | License Photo

May 9 (UPI) -- Wall Street's selloff spilled over into a second week on Monday, as the Dow Jones Industrial Average tumbled to its lowest level in a year amid fresh worries over inflation and tighter Federal Reserve monetary policy.

The latest downturn began the new week on a negative note following a fifth straight weekly decline for the S&P 500 on Friday.

The Dow, however, remains still markedly ahead of where it was after COVID-19 arrived in early 2020, when it sunk to below 19,200. The index has been on a steady rise in the 26 months since then. 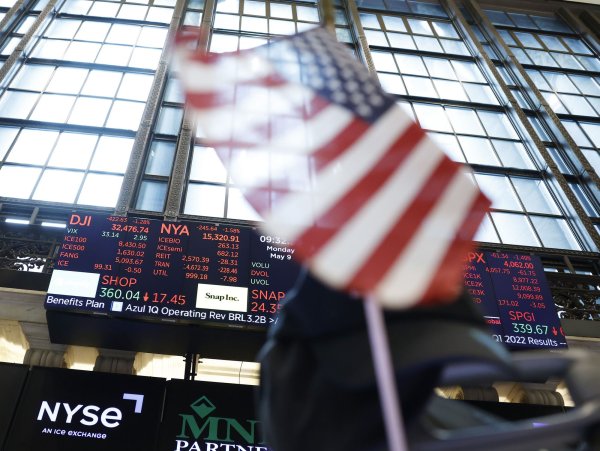 A board on the floor of the New York Stock Exchange shows the Dow down by more than 400 points, on Wall Street in New York City on Monday. Photo by John Angelillo/UPI

Most of the slide on Wall Street in recent months is due to policy actions by the Federal Reserve, which has eased off or ended some of the emergency measures it implemented after the arrival of COVID-19 in early 2020.

Last week, the Fed hiked interest rates by a half-point in a bid to corral rising inflation.

Inflation, which accelerated to 8.5% in March -- the highest since 1981 -- along with rising interest rates, rising oil and food prices due to the war in Ukraine and China's strict COVID-19 policies are combining to weigh on the market, analysts said.

A brief market rally last week after the Federal Reserve followed through on plans to hike interest rates by only a half-point quickly dissipated and was followed by the "real deal" of uncertainty, Eric Diton of the Wealth Alliance told Yahoo Finance.

"That uncertainty is one of the big factors that's driving this market to continue to come down."

"We expect markets to remain volatile, with risks skewed to the downside as stagflation risks continue to increase," Barclays' Maneesh Deshpande wrote in a note obtained by CNBC. "While we cannot discount sharp bear market rallies, we think upside is limited."

Stocks across Europe and much of Asia also were down Monday.

U.S. News // 9 hours ago
Man sought in shooting death of mom pushing baby stroller arrested in NYC
July 2 (UPI) -- The father of an infant whose mother was shot dead while pushing the baby's stroller on the Upper East Side of New York City earlier this week has been arrested.

U.S. News // 12 hours ago
Bodies of mother, 3 children recovered from Minnesota lake
July 2 (UPI) -- Minnesota police are investigating a possible triple-homicide after the bodies of a woman and her three children were recovered from a lake in Ramsay County.