Biden announces up to $150M in military aid to Ukraine 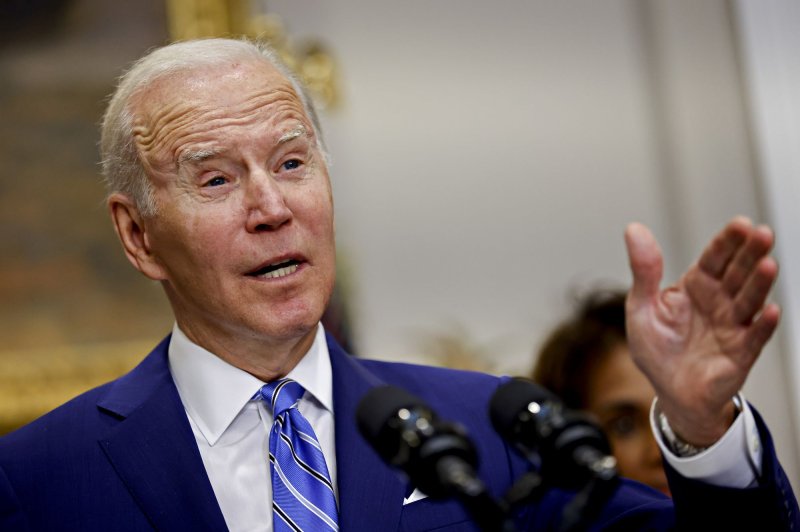 President Joe Biden speaks in the Roosevelt Room of the White House in Washington, D.C., on Wednesday. His administration authorized up to $150 million in security assistance to Ukraine on Friday. Pool photo by Ting Shen/UPI | License Photo

May 7 (UPI) -- The Biden administration has announced $150 million in military aid to Ukraine amid fears of escalation as the Russia-Ukraine war enters its 11th week.

The Pentagon announced the authorization of a presidential drawdown of up to $150 million in security assistance on Friday to meet critical needs for Ukraine as Russian forces continue their offensive in eastern Ukraine.

William LaPlante, the undersecretary of defense for acquisition and sustainment, also said during a Pentagon new conference on Friday that the need for weapons in Ukraine "really outpaces anything we've seen in recent memory."

The authorization on Friday was the ninth drawdown of equipment from Pentagon inventories for Ukraine since August. It comes from $250 million remaining in presidential drawdown authority, allowing the president to transfer excess weapons from U.S. arsenals without congressional approval.

"We need this bill to support Ukraine's fight for freedom," Biden said. "We either back the Ukrainian people as they defend their country, or we stand by as Russians continue their aggression and atrocities in Ukraine."

The call for emergency aid followed the the Biden administration pledging an additional $1.3 billion in aid for Ukraine the previous week, which included military, economic and humanitarian assistance.

Biden also said in a speech last month that a new "Unite for Ukraine" program will ease refugees' access to enter the United States.

Since the beginning of the Biden administration, the United States has committed approximately $4.5 billion in security assistance to Ukraine, including approximately $3.8 billion since the Russia-Ukraine war began on Feb. 24.

RELATED Amnesty International: Russia must be punished for 'horrific' war crimes in Ukraine

The Biden administration has also deployed more than 100,000 troops to member countries of NATO since Russian forces invaded the country.

On Saturday, the British government announced that it will donate an additional 287 mobile generators to Ukraine to run hospitals, shelters and other essential services, bringing the total number its donated to 856.

The donation followed a request from Ukrainian Ambassador Vadym Prystaiko, who praised the previous shipment of generators by saying "the light will always win over darkness."

Ukraine is not a member of NATO, but the country is bordered by four NATO allies: Poland, Slovakia, Hungary and Romania.

The 30-member NATO alliance has warned Russian President Vladimir Putin that an attack on one ally will be considered as an attack on all.

U.S. News // 8 hours ago
Google will delete data of those who visit abortion clinics
July 2 (UPI) -- Google announced Friday it will delete information including whether a person visited an abortion clinic as bans on terminating pregnancies grow in the wake of the Supreme Court's decision to overturn Roe v. Wade.

U.S. News // 10 hours ago
Man sought in shooting death of mom pushing baby stroller arrested in NYC
July 2 (UPI) -- The father of an infant whose mother was shot dead while pushing the baby's stroller on the Upper East Side of New York City earlier this week has been arrested.

U.S. News // 12 hours ago
Popular Minecraft gamer Technoblade dies of cancer at 23
July 2 (UPI) -- Technoblade, a massively popular gamer known for his Minecraft videos on YouTube, has died from cancer at the age of 23, his family announced Thursday.

U.S. News // 14 hours ago
Bodies of mother, 3 children recovered from Minnesota lake
July 2 (UPI) -- Minnesota police are investigating a possible triple-homicide after the bodies of a woman and her three children were recovered from a lake in Ramsay County.