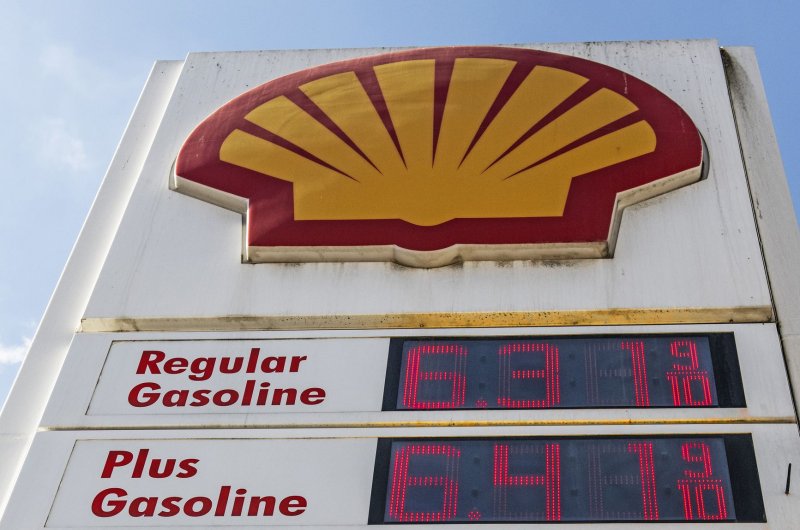 Shell reported earnings on Thursday that showed record revenues over the first three months of 2022. The earnings soared past analysts' expectations and were well beyond what the company earned in 2021. File Photo by Terry Schmitt/UPI | License Photo

May 5 (UPI) -- As gas prices in the United States keep ticking up as the Memorial Day weekend approaches, more oil giants are reporting major revenues and serious profits over the first few months of 2022.

According to AAA, the average cost of gas nationwide was about $4.25 per gallon on Thursday -- an increase of about 2 cents over Wednesday and 4 cents over Tuesday. The average is roughly 11 cents per gallon higher than it was just a week ago.

Prices came down a bit in March and April following policy actions by President Joe Biden, but experts say they are on the rebound now due to a few reasons, including the busier summer driving season and Memorial Day holiday weekend that begins May 27.

Influencing prices at the pump, as always, is oil demand and production. On Thursday, Shell announced first-quarter earnings of $9.1 billion -- a record total that topped most analysts' expectations.

In the first quarter of 2021, Shell earnings were $3.2 billion and the figure for the final quarter of last year was $6.3 billion.

In its announcement, Shell pointed to the fighting in Ukraine, which has disrupted energy supplies across Europe and beyond.

"The war in Ukraine is first and foremost a human tragedy, but it has also caused significant disruption to global energy markets and has shown that secure, reliable and affordable energy simply cannot be taken for granted," Shell CEO Ben van Beurden said in a statement Thursday. "The impacts of this uncertainty and the higher cost that comes with it are being felt far and wide.

"We have been engaging with governments, our customers and suppliers to work through the challenging implications and provide support and solutions where we can."

Last week, ExxonMobil also reported a sizable increase in first-quarter profits, which it said rose by $5.5 billion over the first three months of this year. File Photo by Eduardo Sverdlin/UPI

Shell's earnings report also showed the company's highest quarterly profit since 2008. On Wednesday, BP said in its earnings report that it took a $24 billion hit for exiting the Russian market, but made a large increase in underlying profit -- from $2.6 billion to $6.2 billion -- in the first quarter.

Lawmakers in Congress have said in recent weeks that they're keeping an eye out for possible price gouging by companies that might be exploiting the current energy landscape to make a buck.

Last month, a House committee staged a formal hearing and heard testimony from Big Oil executives -- who all told lawmakers that price gouging in the present economic climate would be unacceptable.

"We have no tolerance for price gouging," Chevron CEO Michael Wirth told the panel. "We are pursuing the responsible development of oil and gas while investing to advance a lower carbon future."

"As long as the supply remains tight, it will be hard for crude oil prices to fall and consumers will in turn face higher prices at the pump," AAA spokesman Andrew Gross said in a statement this week. "It now costs drivers in the U.S. about $23 more to fill up than a year ago."

In its update this week, AAA said that the cost of a barrel of crude is hovering around $100, and that oil prices account for about 60% of the cost of gasoline at the pump.

U.S. News // 4 minutes ago
Twice turned away, JetBlue tries to buy Spirit Airlines in hostile takeover
May 16 (UPI) -- After two failed efforts to acquire budget carrier Spirit, Jetblue said on Monday made a direct appeal to Spirit shareholders to accept a buyout and reject a different deal involving Frontier Airlines.

U.S. News // 16 minutes ago
Trial of Michael Sussmann begins in probe of Russia investigation
May 16 (UPI) -- Michael Sussmann, a former partner at law firm Perkins Coie retained by Hillary Clinton's presidential campaign in 2016, will head to court Monday for a trial on a charge of lying to the FBI.

U.S. News // 12 hours ago
2 dead, 3 injured in shooting at Houston flea market
May 15 (UPI) -- Authorities in Texas said at least two people were killed and three others were injured Sunday during a shooting that erupted at a busy Houston flea market.
Advertisement