May 5 (UPI) -- The community of Seminole, Okla., has been ripped apart by two tornado events in three days, including a multi-tornado outbreak Wednesday evening, leading to massive structural damage and power outage in the city.

Seminole, located about 60 miles southeast of spooking citizens with the eerie atmosphere and leading to downed buildings in the area that has a population of just over 7,000 residents.

Two nights later, the city became entrenched in severe weather once again as two tornadoes struck the area, the first being at approximately 6:46 p.m., with the tornado's immediate aftermath striking into the heart of the city. Damage reports within an hour of the storm contained mentions of downed power lines, roofs blown off of homes and businesses, and a local radio tower being bent. One set of residents that spoke to KOCO 5 in Oklahoma City stated that the roof was blown off of their auto shop and home. 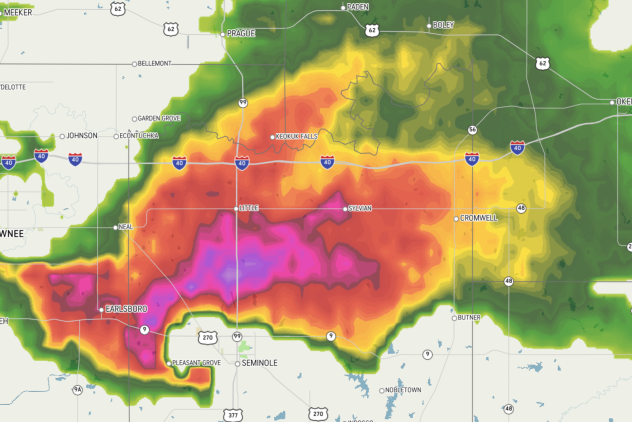 The second tornado of the evening touched ground at approximately 8:48 p.m., after the area was already shaken from the prior hour's damage. Seminole County was unable to sound the area's tornado sirens due to power outages, leading to a potentially dangerous situation for those needing to take safety precautions.

In speaking to the Seminole County endersheriff on the situation, a KOCO reporter stated that there are no injury reports as of 7:38 p.m., but that there were instances of residents trapped after the first tornado touched down. Those trapped were able to get out safely, the endersheriff noted. The report also stated that the downtown portion of the city was the hardest-hit in the chaos.

A flash flood warning was also added to the Seminole County area around the time of the second tornado, with the local Sheriff's Office asking residents to stay away from the area, as the "congestion [delays] response" to the damage.

The tornado's strength has become apparent through several accounts from the ground in Seminole, showing a brick building completely torn apart, among several other scary scenes in the city. The local Seminole High School campus was also reported as damaged post-tornado.

Another local school, The Academy of Seminole, stated that the school took a direct hit from the tornado, with damage assessment to be done on campus over the remainder of the week.

"Please do not come to the school; it is extremely dangerous," the Academy wrote via its Facebook page. "Everyone who was at the school is safe."

The second wave of damage in Seminole is part of an outbreak in the central United States this week, one that dropped tornadoes into Paducah, Texas, as well as Lockett, Texas.

A tornado was also observed just outside of Maud, Okla., Wednesday, located 60 miles east of Oklahoma City and 120 miles east of the Seminole tornadoes.

Tornadoes sprung up elsewhere in the southern Plains, including near Crowell, Texas, located about 175 miles northwest of the Dallas-Fort Worth metroplex.

AccuWeather national reporter Tony Laubach was storm chasing in this area on Wednesday evening and intercepted a twister roaring past wind turbines. Laubach said that the turbines were not severely damaged.

U.S. News // 4 hours ago
CDC drops quarantine, routine testing recommendations in new COVID-19 guidelines
Aug. 11 (UPI) -- The U.S. Centers for Disease Control and Prevention is no longer recommending that students who are exposed to COVID-19 quarantine at home, in a set of updated guidelines released Thursday.

U.S. News // 9 hours ago
Report: Unregulated RenBridge helps criminals launder $540M in crypto
Aug. 11 (UPI) -- An unregulated cryptocurrency cross-chain bridge used to transfer the value between blockchains facilitated the laundering of at least $540 million in proceeds for lawbreakers, according to a new report.