Former President Donald Trump supporters watch his speech on a large screen during a rally in Delaware, Ohio on Saturday. On Monday, a New York judge ordered Cushman & Wakefield to comply with subpoenas concerning an investigation into his business practices. Photo by Aaron Josefczyk/UPI | License Photo

The order from Judge Arthur Engoron of the New York County State Supreme Court was issued on Monday, hours after he held former President Donald Trump in contempt for not complying with a subpoena James had served the former president as part of the same investigation.

"For the second time today, a judge has made clear that no one is above the law," James said in a statement. "Cushman & Wakefield's work for Donald J. Trump and the Trump Organization is clearly relevant to our investigation, and we are pleased that has now been confirmed by the court."

James has been investigating Trump and his organization for more than two years on allegations that the former president inflated the value of his properties to obtained favorable loans but deflated them to lower his taxes.

In January, James revealed several properties under scrutiny, including Seven Springs in Westchester, 40 Wall Street in Manhattan and Trump National Golf Course in Los Angeles, and had issued subpoenas to Cushman & Wakefield for information related to its appraisals of those three proprieties.

Earlier this month, she asked the court to force the real estate firm to comply as it had refused to hand over the information asked of it.

"There should be no doubt that information about Cushman's appraisal work for the Trump Organization is relevant to our efforts that Cushman -- like any other party -- cannot defy a lawful subpoena because no one is above the law," James said in a statement April 8.

James' office has said that Cushman & Wakefield had issued "multiple appraisals" for 40 Wall Street, including three between 2010 and 2012 valuing the property at $220 million but in 2015 an appraisal by the same team and used to secure a loan found it to be worth $550 million.

For Seven Springs and Trump National Golf Club, James' office said it has evidence indicating the Trump Organization filed fraudulent or misleading valuations to the Internal Revenue Service that were used to obtain tax deductions.

Cushman & Wakefield told CNBC in an emailed statement that it stands behind its assessments and appraisers.

"While we acknowledge today's ruling, any suggestion that Cushman & Wakefield has not responded in good faith to the attorney general's investigation continues to be fundamentally untrue," the company said, adding, it has "devoted significant time, resource and expense" to cooperate with James' probe including handing over thousands of pieces of information.

U.S. News // 3 hours ago
Leaders of Finland, Sweden meet Biden at White House, hail 'historic' moves to join NATO
May 19 (UPI) -- President Biden welcomed the leaders of Finland and Sweden to the White House on Thursday after both Scandinavian countries formally applied to join NATO this week, as a direct result of Russia's war in Ukraine.

U.S. News // 1 hour ago
House panel weighs reforms for clemency amid backlog of 17,000 petitions
May 19 (UPI) -- A House panel convened a hearing Thursday to examine the presidential clemency system, just days after a group of lawmakers demanded information on a backlog of 17,000 people who are seeking relief under the process.

U.S. News // 1 hour ago
TikTok rolls out new tools to credit creators
May 19 (UPI) -- TikTok is rolling out new tools for users to tag and credit the content originators who inspired them. 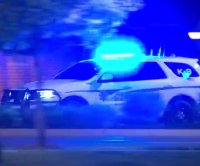 U.S. News // 3 hours ago
Police search for gunman after shooting kills 1 at Tennessee HS graduation
May 19 (UPI) -- Police say that one person was killed in a shooting late on Wednesday at a high school graduation ceremony in central Tennessee, and another person was seriously injured by the gunfire.

U.S. News // 3 hours ago
Senate expected to approve new $40 billion aid package for Ukraine on Thursday
May 19 (UPI) -- The Senate on Thursday is expected to pass a package worth tens of billions of dollars to send more aid and equipment to Ukraine to fend off Russian advances in the Eastern European nation.