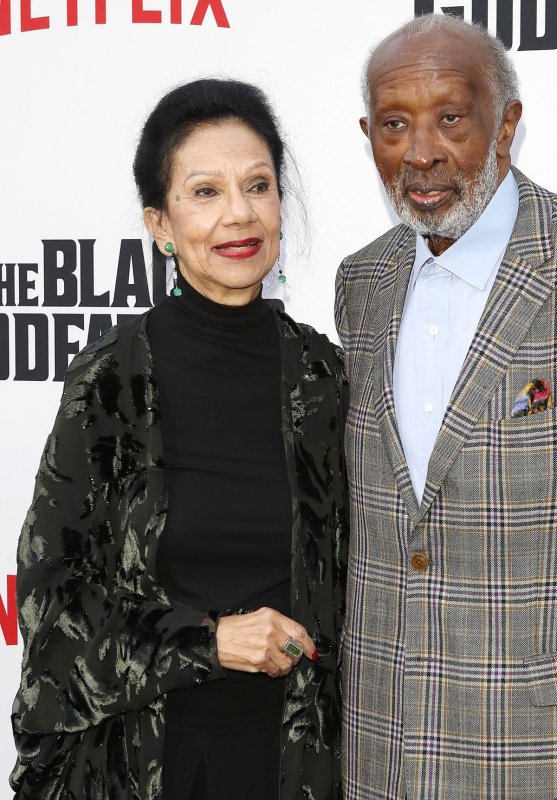 Music producer Clarence Avant (R) and his wife Jacqueline Avant arrive for the world premiere of "The Black Godfather" at the Paramount Theater in Los Angeles on June 3, 2019. A California man was sentenced to three life terms for killing Jacqueline Avant. File Photo by Nina Prommer/EPA-EFE

Aeriel Maynor, 30, pleaded guilty to killing the 81-year-old woman and shooting toward a security guard at the Beverly Hills home she shared with her husband, music executive Clarence Avant, in December. In addition to first-degree murder and attempted murder, he pleaded guilty to possession of a firearm by a felon and two counts of first-degree residential burglary with person present.

"We asked for the maximum sentence," Victor Avila of the Los Angeles District Attorney's Office said, according to KTLA-TV. "He was sentenced and held accountable for the murder of Ms. Jacqueline Avant, for the attempted murder of a security guard [and] for two separate residential burglaries."

Solorzano said Maynor planned the burglary by looking up the homeownership records of Clarence Avant, famed for his work with musicians Babyface, Bill Withers and Jimmy Smith. Clarence Avant was inducted into the Rock and Roll Hall of Fame in 2021 and received the organization's Ahmet Ertegun Award.

Maynor broke into the home around 2:20 a.m. on Dec. 1, expecting to steal about $50,000, according to a jailhouse phone call he had with a woman about the incident. Jacqueline Avant was taken to Cedars-Sinai Medical Center where she died.

During the call, he boasted about shooting the woman and laughed about the publicity he received, the Times reported.

"That's not funny. That's somebody's life," the woman, whose name wasn't reported, said during the call.

The Beverly Hills Police Department said 2 hours after Jacqueline Avant was shot, officers responded to a report of another shooting in the 6000 block of Graciosa Drive.

Officers arrived to find Maynor in the back yard suffering from an accidental self-inflected gunshot wound to the foot that occurred during a burglary at the residence.

Maynor was transported to a local hospital as Beverly Hills detectives collected evidence they said connect Maynor to the death of Jacqueline Avant, including the suspected firearm.

Jacqueline Avant was on the board of directors of the International Student Center at UCLA and was president of the Neighbors of Watts, an organization that supports the South Central Community Child Care Center.

U.S. News // 4 hours ago
More than two-thirds of shoppers struggling to pay for groceries
Dec. 7 (UPI) -- Grocery bills are too expensive for the average American and customers are changing their shopping habits, according to a survey released Wednesday.

U.S. News // 5 hours ago
Cigarette companies ordered to display 'corrective' signs at stores
Dec. 7 (UPI) -- Smokers will soon see new warning signs when they go to purchase a new pack after a new order from the Justice Department and Department of Health and Human Services.
Advertisement

Volcanic activity occurring all around the world