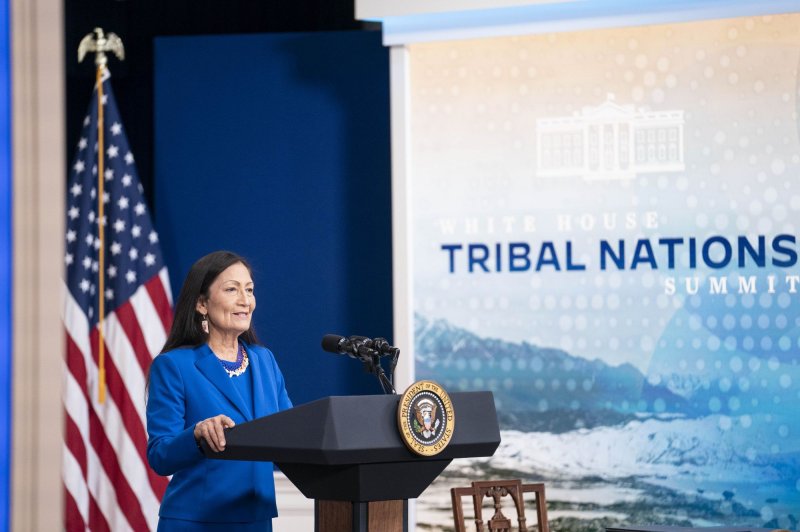 Secretary of the Interior Deb Haaland delivers remarks during a virtual Tribal Nations Summit as part of national Native American Heritage Month in the South Court Auditorium of the Eisenhower Executive Office Building near the White House in November 2021. File Photo by Sarah Silbiger/UPI | License Photo

April 15 (UPI) -- The Department of the Interior announced Friday that President Joe Biden's administration would resume oil and gas leases on federal land but has increased the royalty rate that companies pay to the government.

The Interior Department described the royalty increase, which rose to 18.75% from 12.5%, as the "first-ever increase in the royalty rate" and said in a statement that it was made "to ensure fair return for the American taxpayer and on par with rates charged by states and private landowners."

The Interior Department's Bureau of Land Management will post the notices to begin auctioning 144,000 acres of public land in nine states, an 80% reduction from what the agency had previously identified as eligible land, on Monday.

The move to resume selling those leases, the first under the Biden administration, comes after the Interior Department had paused them in February amid a fight with Republican states over the use of a carbon cost metric that put a high dollar amount on damages caused by greenhouse gas emissions.

The decision on Friday to resume those leases, as well as the implementation of the royalty rate hike, was made as Biden faces pressure to lower energy costs while also battling climate change.

"For too long, the federal oil and gas leasing programs have prioritized the wants of extractive industries above local communities, the natural environment, the impact on our air and water, the needs of Tribal Nations, and, moreover, other uses of our shared public lands," said Secretary of the Interior Deb Haaland.

"Today, we begin to reset how and what we consider to be the highest and best use of Americans' resources for the benefit of all current and future generations."

The Interior Department also noted that the parcels that will be leased are near existing oil and gas developments and infrastructure to "help conserve the resilience of intact public lands and functioning ecosystems."

The new leases are the Biden administration's second attempt to increase the amount of federal property drilling after attempting to sell 80 million acres of leases in the Gulf of Mexico, which a federal judge in January blocked in January after ruling the impact on climate change was not properly assessed.

The Intergovernmental Panel on Climate Change, which included 278 of the world's top economic and scientific researchers from 65 countries, provides details in the report on the last remaining paths to stop irreversible damage to the planet.

The report found that global greenhouse gas emissions need to be reduced by 43% by 2030 and reach net zero in the 2050s to stabilize global warming at around 2.7 degrees Fahrenheit, the temperature target agreed upon in the Paris Climate Accords. Methane will also need to be reduced by about 33%.

If the global emissions of greenhouse gasses are not reduced, it will lead to worsening natural disasters and the destruction of ecosystems among other threats to humanity.

U.S. News // 6 minutes ago
3-year-old killed during road rage incident in Chicago
Oct. 1 (UPI) -- A 3-year-old boy was shot and killed while in a car with his mother on the Southwest side of Chicago.

U.S. News // 7 hours ago
At least 35 killed by Hurricane Ian in Lee County, Fla., sheriff says
Oct. 1 (UPI) -- At least 35 people were killed in the Florida county that absorbed the most direct hit from Hurricane Ian earlier this week, the area's sheriff said Saturday.

U.S. News // 3 hours ago
Forecasters monitoring what's next in the Atlantic in wake of Ian
As Ian unravels across the mid-Atlantic states, meteorologists are monitoring the Atlantic basin where new tropical storm development may soon happen.

U.S. News // 1 day ago
Florida begins rescue and recovery a day after Hurricane Ian's strike
Sept. 30 (UPI) -- Florida residents have begun the monumental task of cleaning up as the devastation left by Hurricane Ian came into focus a day after the storm slammed into the Gulf Coast and decimated large swaths of the state.