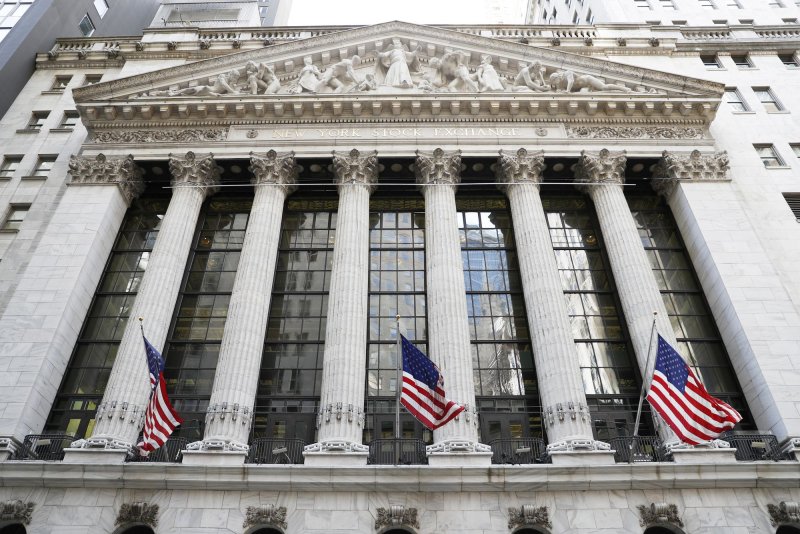 American Flags hang outside at the NYSE after the opening bell at the New York Stock Exchange on Wall Street in New York City on Friday, February 18, 2022. Stocks began the day lower on Friday to extend declines after a sell-off on Thursday. Photo by John Angelillo/UPI | License Photo

April 12 (UPI) -- U.S. markets fell for the second consecutive day Tuesday as reports showed inflation has risen to its highest level since 1981.

Markets started the day sharply higher on Tuesday after falling on Monday with the Dow up as much as 361.89 points, or 1.1%, while the S&P 500 was up 1.3% and the Nasdaq had climbed 2% before investors reacted to the inflation data.

The Labor Department reported that the Consumer Price Index increased 8.5% in March over the same time last year, the largest jump over a 12-month period since December 1981.

"Investors are laser focused on what the Federal Reserve is going to do in its upcoming meetings and it's looking like 50 basis point hikes are more and more likely," Commonwealth Financial Network head of investment management Bill Price said, according to Yahoo Finance. "The market seems to be discounting 50 basis point hikes and several members of the Fed have been pretty vocal about their desire to curb inflation."

The benchmark 10-year treasury yield dropped 6 basis points to 2.717% after hitting a three-year high on Tuesday.

Gas prices surged after falling on Monday as China began to ease COVID-19 lockdowns. The international benchmark Brent crude rose 6% to $104.60 per barrel, while West Texas Intermediate crude -- the U.S. benchmark -- climbed 6.7% to $100.66 per barrel.