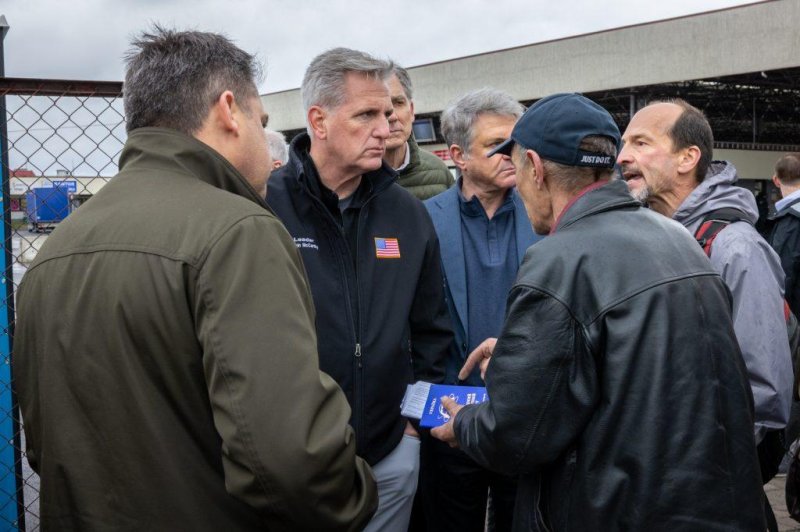 House Minority Leader Kevin McCarthy, R-Calif., and a bipartisan group of lawmakers are pictured speaking with some of the Ukrainian refugees in Poland. Photo courtesy Kevin McCarthy/UPI

April 10 (UPI) -- House Minority Leader Kevin McCarthy, R-Calif., has led a bipartisan group of lawmakers to Warsaw to meet with the prime minister of Poland and officials from Ukraine to discuss the ongoing war.

McCarthy was joined on the trip by Republican Whip Steve Scalise and six other Republicans, as well as Democratic representatives Kathleen Rice of New York and Stephanie Murphy of Florida.

"The whole world is watching what's unfolding in Ukraine," McCarthy said in a statement.

"We see the atrocities being committed by Vladimir Putin, and more importantly, we see the bravery of the Ukrainian people. We are here as representatives of the United States to ensure we are doing what is right to support Ukrainians as they defend themselves and their democracy."

McCarthy said that Poland has been an "indispensable strategic partner" to the United States by "contributing fully to NATO."

Data from the United Nations High Commissioner for Refugees shows that more than 2.5 million Ukrainians have fled to Poland since the start of the Russian invasion. The lawmakers were pictured speaking with some of the Ukrainian refugees in Poland.

Cheney told CNN that the United States should be more involved in the sea of Azov "to help keep the shipping lanes open to ensure that the Ukrainians are not continuing to suffer from the kind of economic blockade that the Russians are attempting to impose now."

"I think the West and NATO has got to understand that Putin's defeat in Ukraine is a fundamental national security interest for us," she said.

Jens Stoltenberg, the secretary-general of NATO, told The Telegraph on Saturday that the alliance is "in the midst of a very fundamental transformation" that will include a permanent security force along its borders to combat future Russian aggression.

NATO has already nearly increased its number of troops tenfold on its eastern borders since the months before the Russian invasion with around 40,000 troops, Stoltenberg told The Telegraph.

Last month, President Joe Biden criticized Russian President Vladimir Putin and said he "cannot remain in power" during a speech delivered in front of the Royal Castle in Warsaw.

"A dictator bent on rebuilding an empire will never erase a people's love for liberty. Brutality will never grind down their will to be free. Ukraine will never be a victory for Russia - for free people refuse to live in a world of hopelessness and darkness," Biden said in the speech.

Much of Biden's speech had been focused on delivering a message of support for Ukraine and visiting refugees after meeting officials earlier in the day.

His comments, which appeared to condone a regime change, mark among the sharpest rebukes Biden has made against his Russian counterpart and sent White House officials scrambling to clarify his comments in the aftermath.

Sen. Amy Klobuchar, D-Minn., also visited Poland in March with a bipartisan group of senators and met with Ukrainian refugees and aid workers near the border.

"Poland has been a stalwart ally to Ukraine, welcoming Ukrainian refugees and providing critical resources during this unprovoked attack," Klobuchar had said in a statement at the time.

"We will be meeting with military and government leaders, U.S. soldiers stationed in Poland, and Ukrainian refugees and aid workers. We will make clear our commitment to stand with the Ukrainian and Polish people against Vladimir Putin."

Also in March, Klobuchar advocated for the release of Minnesota man Tyler Jacob who was detained by Russian forces while leaving Ukraine.

"Tyler Jacob of Winona, MN is safe. A teacher in Ukraine, he was detained at a Russian checkpoint while trying to leave the country," Klobuchar said in a statement.

"Thanks to his parents Tina and John for never giving up, and our State Department and U.S. Ambassador in Moscow Sullivan who spoke with me and directly helped."

U.S. News // 1 hour ago
Oklahoma schedules 25 executions to begin in August
July 1 (UPI) -- An Oklahoma court on Friday scheduled the executions of 25 men over the next two and a half years, cases that the prisoners' lawyers say "exemplify systemic flaws" in the state's use of the death penalty.

U.S. News // 4 hours ago
Biden predicts states will ban women from traveling for abortion
July 1 (UPI) -- President Joe Biden on Friday predicted some states will try to prevent women from crossing state lines to seek an abortion but pledged to protect women's rights to travel to seek such services.

U.S. News // 5 hours ago
Iowa family sues amusement park in death of 11-year-old in 2021
July 1 (UPI) -- The family of an 11-year-old Iowa boy who died when an amusement park ride malfunctioned nearly a year ago filed a lawsuit against the park and its managers on Thursday.
Advertisement