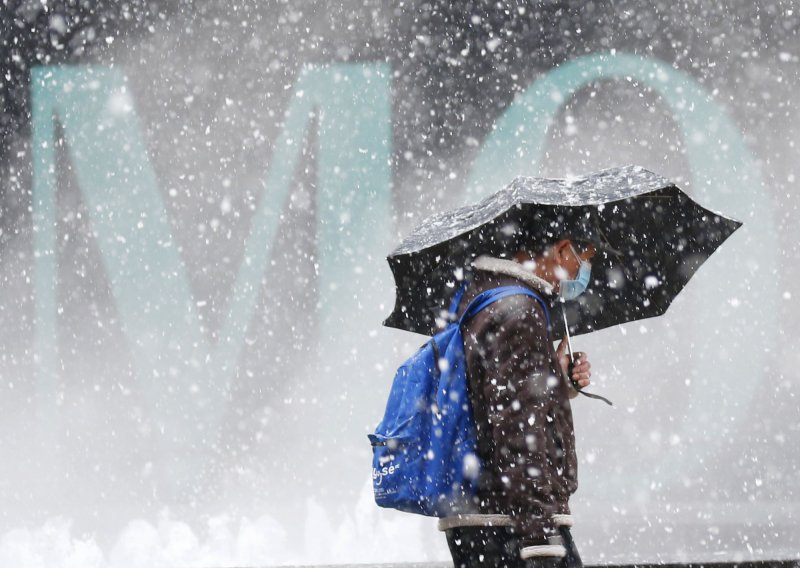 A pedestrian carries an umbrella while walking through a heavy snow fall past the newly renovated David Geffen Hall in New York City. Photo by John Angelillo/UPI | License Photo

Virginia had a wide range of impacts from the storm, AccuWeather reported Saturday. The western portion of the state was under blizzard and winter storm warnings, and in southeast areas, such as Virginia Beach, a tornado watch was issued.

In Baltimore, it was raining Saturday, but by 8:30 a.m., the rain had turned into snow as the temperature dipped to 35 degrees, and in Philadelphia and New York City, the rain is expected to turn into snow as well as temperatures dip, AccuWeather meteorologist Renee Duff said.

RELATED Winter storm causes disruptions as it darts through Turkey

In Scranton, Pa., the Saint Patrick's Day Parade officials said in a Facebook post on Friday that the parade originally scheduled for this Saturday was postponed to next Saturday "due to the impending severe winter storm."

Scranton is expected to get 3-7 inches of snow, causing difficult driving conditions in the area, according to the AccuWeather forecast.

Meanwhile, Syracuse, N.Y., which is forecast to receive 4-8 inches of snow through Saturday night, will go ahead with St. Patrick's Day Parade despite the winter storm after the parade was canceled for the last two years due to the COVID-19 pandemic, AccuWeather reported. Snow plows were clearing the parade route and salting the roads.

Several areas in Kentucky, Ohio, West Virginia and Tennessee reported 6 inches of snow, and depending on how quickly cold air rushes across the I-95 corridor, about an inch or two of snow could accumulate in major cities, from Washington, D.C., to New York City, according to AccuWeather.

The National Weather Service Charleston West Virginia left a winter storm warning in place with many people in the area waking up to 5-8 inches of snow early Saturday.

In Kanawha County, W.Va., there were reports of multiple accidents and officials warned residents to stay off the roads.

On the southeastern edge of the storm, there were reports of strong thunderstorms, and freeze warnings from the Big Bend of Florida to the Golden Triangle of Texas and Louisiana.

Next week a warm up is expected.

U.S. News // 3 hours ago
Latest hurricane danger could plot an 'unusual track' toward Florida
AccuWeather meteorologists are warning Tropical Storm Ian in the Caribbean could potentially strike the west coast of Florida -- an often missed target.

U.S. News // 1 day ago
Arizona judge reinstates 1864 abortion ban from before territory became a state
Sept. 23 (UPI) -- An Arizona judge on Friday ruled that an 1864 territorial law banning abortions should be reinstated, just a day before a new ban on abortions after 15 weeks of pregnancy was to take effect.
Advertisement