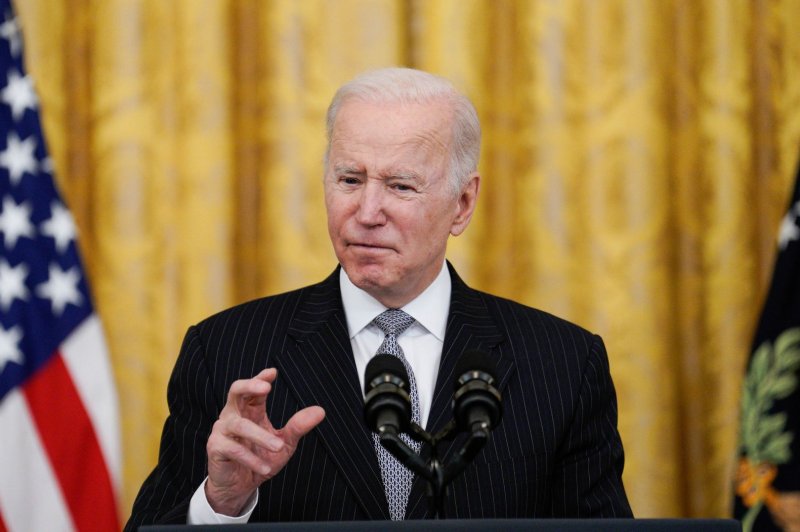 U.S. President Joe Biden speaks at an event in the East Room of the White House to reignite the "Cancer Moonshot" in Washington, D.C., on Wednesday. Photo by Yuri Gripas/UPI | License Photo

Feb. 2 (UPI) -- President Joe Biden on Wednesday vowed to slash the cancer death rate in half over the next 25 years, calling his goal "ambitious, but ... doable."

He announced the aggressive undertaking during remarks on reviving his so-called "cancer moonshot" effort.

"The goal is to cut the cancer death rate in half in the next 25 years," Biden said during a White House event Wednesday. "It's bold, it's ambitious, but it's completely doable.

"We can do this. We can end cancer as we know it."

Biden launched the Cancer Moonshot initiative in 2016 as vice president under President Barack Obama, not long after his son Beau died of brain cancer.

"We're calling it a 'Moonshot,' and that's because I believe that this effort, like President [John] Kennedy's call to land on the moon 55 years ago, is truly a call to humankind -- to be bold and do big things," Biden said at the time.

The White House said Wednesday that the time is right to resurrect the ambitious goal with improvements in cancer therapeutics, diagnostics and patient-driven care, along with scientific advances and public health lessons of the COVID-19 pandemic.

Along with cutting the cancer death rate in half, the Biden administration seeks to improve the experiences of people living with and surviving cancer.

Under his new plan, Biden will establish the White House Cancer Cabinet, an initiative involving multiple departments across the federal government. He called for improved and earlier cancer screenings and detection, as well as prevention and even at-home screenings.

Biden said he also plans to hold a Cancer Moonshot Summit at an undecided date to bring researchers, patient advocacy groups, and biopharmaceutical and healthcare companies together.

Biden also used the opportunity to call on all those who missed regular cancer screenings due to the COVID-19 pandemic to catch up with doctor's appointments.

"Last November, I got a colon cancer screening. I'm glad I did. Trust me, I know cancer's scary. Going to the doctor can be scary. But screening is how you catch it before it's too late."

A study published in April found that the number of people screened for three of the most common cancers in the United States declined sharply during the first wave of the COVID-19 pandemic.

Compared to the same period in 2019, screenings for breast cancer decreased by just over 90% between March 1, 2020, and May 31, 2020, while diagnostic evaluations for colon and rectal cancers dropped by nearly 80%. Similarly, there were 63% fewer prostate cancer screenings.

Officials said the age-adjusted death rate from cancer has fallen by about 25% over the past two decades, which means that people are beating cancer and living longer.

Then-Vice President Joe Biden speaks about the 21st Century Cures Act during a ceremony in the Eisenhower Executive Office Building in Washington, D.C., on December 13, 2016. The bill aimed to accelerate discoveries in cancer research as part of the Obama administration's Cancer Moonshot initiative. File Photo by Kevin Dietsch/UPI

"Science brought us treatments that target specific mutations in many types of cancer -- for example, in certain types of lung cancer, leukemia, and skin cancers," the White House said ahead of Biden's speech Wednesday.

"It has also provided therapies that use our immune system to detect and kill cancer cells and these immunotherapies are making a big difference in certain skin cancers, blood cancers, and others."

Ellen Sigal, founder of Friends of Cancer Research, called Biden's new cancer push "audacious" -- but told The New York Times that she has "no doubt there will be mechanisms to achieve them."

"The original moonshot demonstrated that it was possible to compress a decade's worth of progress into a few short years. We can't afford to not take that opportunity a reality again," she said.

U.S. News // 19 hours ago
White House condemns Trump's call for 'termination' of U.S. Constitution
Dec. 3 (UPI) -- Former President Donald Trump on Saturday called for the "termination" of U.S. rules and regulations, "even those found in the Constitution," drawing condemnation from the White House later Saturday.

U.S. News // 1 day ago
Tampa police chief placed on leave after golf cart traffic stop
Dec. 3 (UPI) -- The police chief of Tampa, Fla., has been placed on administrative leave after flashing her badge at a deputy who had stopped her while she and her husband were riding golf cart.