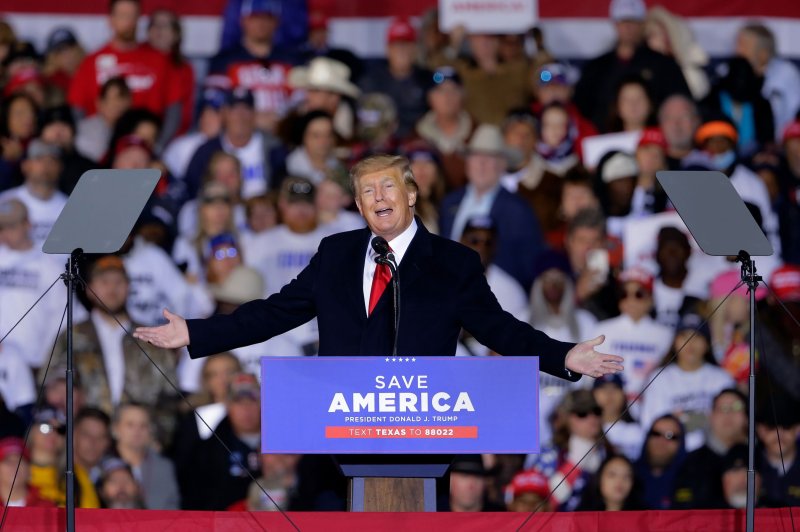 Jan. 31 (UPI) -- Atlanta's top prosecutor who's probing possible election interference by former President Donald Trump in Georgia says she's requested enhanced security from the FBI after remarks that Trump made at a rally over the weekend.

Fulton County District Attorney Fani Willis sent a letter to J.C. Hacker, the head of the FBI's Atlanta field office, asking him to carry out a risk assessment of the county courthouse and nearby government buildings after Trump urged supporters to target her for large-scale protests, the Atlanta Journal-Constitution and WXIA-TV reported.

"We must work together to keep the public safe and ensure that we do not have a tragedy in Atlanta similar to what happened at the United States Capitol on Jan. 6, 2021," she told Hacker.

Last week, the Superior Court of Fulton County granted Willis' request for a special grand jury in her investigation.

Willis has been investigating whether Trump broke Georgia election law, specifically over audio of a phone call in which Trump pressured Georgia Secretary of State Brad Raffensperger to "find 11,780 votes" to overturn the state's certified results of the 2020 presidential election.

In her letter to the FBI, Willis quoted Trump at a rally in Texas Saturday in which he decried the multiple investigations as "prosecutorial misconduct at the highest level."

"lf these radical, vicious, racist prosecutors do anything wrong or illegal, I hope we are going to have in this country the biggest protests we have ever had in Washington, D.C., in New York, in Atlanta and elsewhere because our country and our elections are corrupt," he said at the event.

"These prosecutors are vicious, horrible people. They're racist and they're very sick," Trump added, apparently in a reference to the fact that Willis, James, Bragg and Thompson are all Black.

"My staff and I will not be influenced or intimidated by anyone as this investigation moves forward," Willis wrote in her letter to the FBI.

"I have an obligation to ensure that those who work in and visit the Fulton County Courthouse, the adjoining Fulton County Government Center and surrounding areas are safe."

At the rally Saturday, Trump also declared he would issue presidential pardons for all the people who are being prosecuted over the Jan. 6 attack if he's re-elected in 2024.

Trump says he would pardon Jan. 6 rioters if re-elected

U.S. News // 21 minutes ago
Trial of ex-Fort Worth police officer Aaron Dean starts Monday
Dec. 5 (UPI) -- Opening arguments for the trial of a white former police officer in Texas who killed a Black woman inside her home in 2019 that sparked racial protests started Monday without any Black jurors.

U.S. News // 2 hours ago
2022 year in review: Roe vs. Wade, War in Ukraine, losing Queen Elizabeth II
Dec. 5 (UPI) -- From abortion rights to war in Ukraine, the past year has seen Americans and the world face several historic events.

U.S. News // 8 hours ago
Police: Child safe after seeing mother fatally shot outside Texas hospital
Dec. 5 (UPI) -- Police in Houston said an 8-year-old girl was safe after witnessing a man fatally shoot her mother before turning the weapon on himself in the parking lot of the Texas Children's Hospital.

U.S. News // 20 hours ago
Gunfire damaged North Carolina power station, outage ongoing
Dec. 4 (UPI) -- Nearly 40,000 customers were still without power in North Carolina on Sunday night, after an apparent incident of vandalism involving the use of a firearm cut power a night prior in Moore County.

U.S. News // 1 day ago
White House condemns Trump's call for 'termination' of U.S. Constitution
Dec. 3 (UPI) -- Former President Donald Trump on Saturday called for the "termination" of U.S. rules and regulations, "even those found in the Constitution," drawing condemnation from the White House later Saturday.
Advertisement