Neil Young performs at Farm Aid 2017 at the KeyBank Pavilion in Burgettstown, Pennsylvania in 2017. Spotify lost billions in market value after Young pulled his music catalog from the streaming giant over his concerns that podcaster Joe Rogan was spreading COVID-19 misinformation. File Photo by Archie Carpenter/UPI | License Photo

Jan. 30 (UPI) -- Spotify lost billions in market value after Neil Young pulled his music catalog from the streaming giant over his concerns that podcaster Joe Rogan was spreading COVID-19 misinformation.

Shares of Spotify were $172.98 at market close Friday, down 12% from $195.53 at the close of trading last week before the controversy began, after reaching a 19-month low on Thursday amid trending social media campaigns to cancel subscriptions to the streaming platform.

Spotify shares may continue to be affected when the market opens Monday after singer-songwriter Joni Mitchell announced Friday she would remove her music from the platform, followed by Nils Lofgren on Saturday.

The royal couple currently has a $25 million deal to make podcasts for the platform.

"Since the inception of Archewell, we have worked to address the real-time global misinformation crisis," the statement reads. "Hundreds of millions of people are affected by the serious harms of rampant mis- and disinformation every day."

The spokesperson noted in the somewhat cryptic statement that Harry and Meghan have raised concerns about the "consequences of COVID-19 misinformation" on Spotify since April 2021.

"We have continued to express our concerns to Spotify to ensure changes to its platform are made to help address this public health crisis," the statement reads. "We look to Spotify to meet this moment and are committed to continuing our work together as it does."

It was not immediately clear if the royal couple would seek to get out of the deal if they were to believe Spotify was not addressing COVID-19 misinformation.

Lofgren, the renowned rock guitarist and longtime member of Bruce Springsteen's E Street Band, announced Saturday he would pull his music catalog, which includes 28 solo records, in a message posted to the Neil Young Archives website.

Apart from being a member of the E Street Band, for which he was inducted into the Rock and Roll Hall of Fame in 2014, Lofgren is also a member of Crazy Horse -- which has long been associated and performed with Young. Some of Longren's music had already been removed from the platform during Young's exodus.

"Neil and I go back 53 years. Amy and I are honored and blessed to call Neil and Daryl friends, and knew standing with them was the right choice," Lofgren wrote before encouraging "all musicians, artists and music lovers" to cut ties with Spotify.

He became the third major artist to pull their music after Mitchell said Friday she would remove her music from Spotify in protest after recent controversy between Neil Young and the music streaming giant over podcaster Joe Rogan's COVID-19 "misinformation."

Mitchell, whose music garners 3.7 million monthly listeners on the platform, released a message to her website Friday titled "I Stand With Neil Young!" She was the first major artist to follow Young in leaving Spotify.

The singer-songwriter, who has earned nine Grammy Awards including a Lifetime Achievement Award for her contributions to music, has sold millions of her 19 studio albums since her career began in 1968. She has also been inducted into the Rock and Roll Hall of Fame and was ranked ninth on Rolling Stone's list of the 100 Greatest Songwriters of All Time.

Spotify agreed to pay Rogan $100 million in 2020 for exclusive rights to air The Joe Rogan Experience, which is one of the most popular programs in the world.

U.S. News // 7 minutes ago
Florida passenger who landed plane after pilot passed out says he had to 'do or die'
May 16 (UPI) -- A Florida man who was forced to take over the controls of a small airplane last week, after the pilot had a medical emergency mid-flight, says that he did what he did because he didn't have a choice.

U.S. News // 24 minutes ago
Twice turned away, JetBlue tries to buy Spirit Airlines in hostile takeover
May 16 (UPI) -- After two failed efforts to acquire budget carrier Spirit, Jetblue said on Monday made a direct appeal to Spirit shareholders to accept a buyout and reject a different deal involving Frontier Airlines.

U.S. News // 35 minutes ago
Trial of Michael Sussmann begins in probe of Russia investigation
May 16 (UPI) -- Michael Sussmann, a former partner at law firm Perkins Coie retained by Hillary Clinton's presidential campaign in 2016, will head to court Monday for a trial on a charge of lying to the FBI. 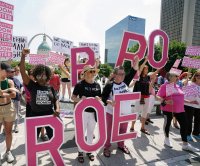