Jan. 24 (UPI) -- U.S. markets closed the day in the green in a stunning comeback after dropping to start the day as investors flocked to technology stocks.

Monday marked one of the most significant comebacks in market history, as it was the first time since the aftermath of the 2008 financial crisis that the Nasdaq Composite closed with gains after falling more than 4% in intraday trading, while the Dow saw its largest comeback since March 2020.

Investors began the day by selling off tech stocks, but later returned to buy them up with Facebook's parent company, Meta, rising 1.83%, Amazon gaining 1.33%, Twitter climbing 0.69% and Microsoft closing up 0.11%, all rebounding from earlier losses.

Kohl's stock price shot up 36.02% after The Wall Street Journal reported that a consortium backed by activist hedge fund Starboard Value LP had offered $9 billion to by the department-store chain for $64 a share in cash on Friday.

Fellow retailers Macy's and Nordstrom also got a boost, rising 17.95% and 12.95% respectively.

The losses started early, as Adam Crisafulli, founder of Vital Knowledge said investors were on edge as they are anticipating fourth-quarter earnings reports from big tech companies coming Tuesday and the Fed's decision on interest rates expected Wednesday.

"What had initially been a stimulus withdrawal-driven decline morphed last week to include earnings jitters," said Adam Crisafulli, founder of Vital Knowledge, according to CNBC. "So investors are now worried not just about the multiple placed on earnings, but the EPS [earnings-per-share] forecasts themselves."

Inflation, the Federal Reserve's plans to raise interest rates, the start to fourth-quarter earnings reports and tensions in Ukraine were among factors driving Monday's drop. Investment bankers warned that uncertainty could persist.

"Winter is here, and the damage under the surface has been enormous and even catastrophic for many individual stocks," Wilson said. "The Fed is serious about fighting inflation, and it's unlikely that it will be turning dovish anytime soon given the seriousness of these economic threats and the political support to take action."

"The recent pullback in risk assets appears overdone, and a combination of technical indicators approaching oversold territory and sentiment turning bearish suggest that we could be in the final stages of this correction," Kolanovic said.

"While the market struggles to digest the rotation forced on it by rising rates, we expect the earnings season to reassure, and in a worst case scenario could see a return of the 'Fed put.'" 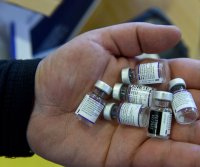