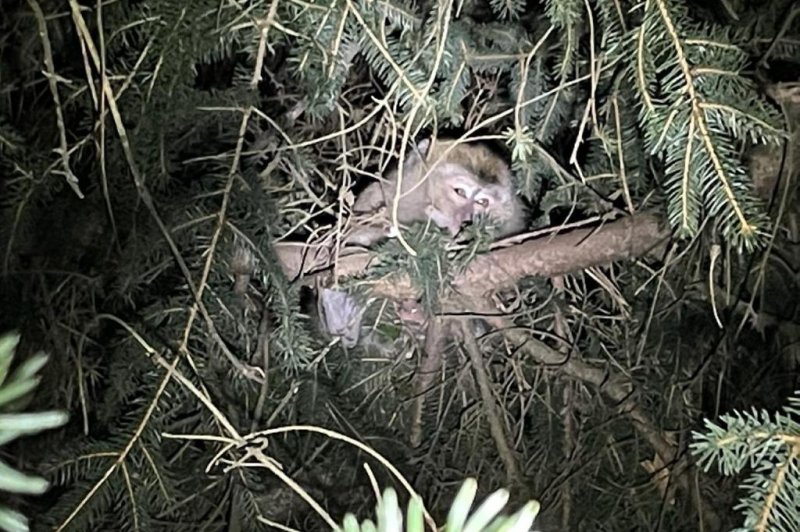 A long-tailed macaque monkey sits in a tree after it escaped a truck crash in Pennsylvania on Friday. Photo courtesy Pennsylvania State Police/Twitter

Jan. 22 (UPI) -- Four lab monkeys escaped Friday after the trailer they were in was involved in a crash on a Pennsylvania highway, but were all recovered by Saturday night.

Officials with the Pennsylvania State Police said that a pickup truck pulling a trailer carrying 100 long-tailed macaque monkeys collided with a dump truck on State Route 54 near Danville around 3:30 p.m.

The two drivers involved in the crash were not injured but a passenger in one of the vehicles was transported to a local hospital with minor injuries, according to the police report from the crash. The police report noted that officials from the Centers for Disease Control and Prevention were at the scene to assist with the response.

After the crash, troopers had urged members of the public to keep their distance and immediately call 911 if spotting the monkey. The troopers did not explain what dangers the monkeys pose if encountered by the public.

"We are asking that no one attempt to look for or capture the animal. Anyone who sees or locates the monkey is asked not to approach, attempt to catch, or come in contact with the monkey. Please call 911 immediately," the troopers tweeted.

People for the Ethical Treatment of Animals, an organization that advocates for animal rights, released a statement after the crash noting that the long-tailed macaques were on their way to a CDC-approved quarantine facility in Florida after arriving in the United States from Mauritius.

"Because these 100 long-tailed macaque monkeys were headed to a laboratory to be caged, tormented, and killed, they were already in danger-but now the public is, too," the statement from PETA reads.

"The four who got away -- including one who is still missing -- are undoubtedly terrified and likely injured, and they may be harboring viruses that are transmissible to humans. There is no way to ensure that monkeys are virus-free."

In a statement sent to United Press International on Jan. 28, the organization said that it had urged Kenya Airways, which it said has transported hundreds of monkeys from a Mauritius breeding farm to the U.S. to be used in laboratory experiments, to stop transporting them into the country.

"Kenya Airways ... has committed to ending this practice after its current contract expires next month," the statement reads.

Michael Joseph, chairman of the airline, said in an email to PETA that the current contract for the transport of the Macaques "will not be renewed when it expires at the end of February."

The long-tailed macaque monkeys, also known as cynomolgus monkeys, are often used in scientific research, The New York Times noted, and were in high demand during the COVID-19 pandemic for researching vaccines.

U.S. News // 14 hours ago
Kidnapped Texas woman reunited with family after 51 years
Nov. 29 (UPI) -- A woman who was kidnapped as an infant was reunited with her birth parents after more than 50 years, her family confirmed this week.
Advertisement

Three men rescued from tanker's rudder after 11 days at sea