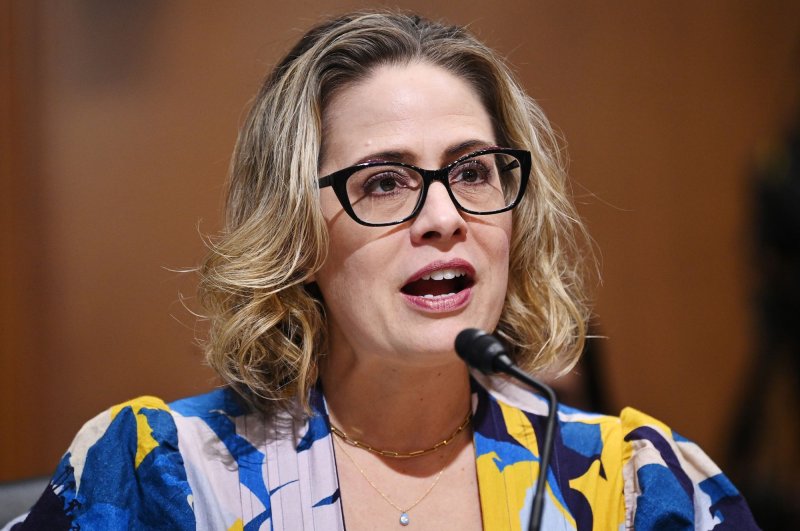 Jan. 22 (UPI) -- Leaders in the Arizona Democratic Party decided Saturday to censure U.S. Sen. Kyrsten Sinema after she sided with Republicans this week in voting against a change in Senate filibuster rules to pass voting rights legislation.

Raquel Teran, chair of the Arizona Democratic Party, said in a statement that the censure -- a formal expression of condemnation -- was levied "as a result of her failure to do whatever it takes to ensure the health of our democracy."

"I want to be clear, the Arizona Democratic Party is a diverse coalition with plenty of room for policy disagreements, however on the matter of the filibuster and the urgency to protect voting rights, we have been crystal clear," Teran said. "In the choice between an archaic legislative norm and protecting Arizonan's right to vote, we choose the latter, and we always will."

Sinema and Sen. Joe Manchin (D-W.Va.) were the only two Democrats to vote Wednesday against making changes to the Senate filibuster, a rule which requires 60 votes rather than a simple majority for legislation to pass through the upper chamber.

After the filibuster vote, Republicans successfully blocked the passage of two bills in the Senate pushed by Democrats who view them as necessary for safeguarding voting rights in the country.

Earlier this month, Sinema had said that she supports the voting rights legislation but opposed changes to the filibuster -- arguing that debate over the filibuster was furthering political divisions in the country.

"Demands to eliminate this threshold (from whichever party holds the fleeting majority) amount to a group of people separated on two sides of a canyon, shouting to their colleagues that the solution to their shared challenges is to make that rift both wider and deeper," Sinema said.

In her statement, Teran noted that Arizona Republicans pushed for a "sham audit" of the 2020 presidential election vote after false claims of voter fraud. Republican states across the country have since pushed for measures that Democrats view as restricting the ability to vote.

"Arizona Republicans are already trying to push restrictive legislation to eliminate our popular and long-standing vote-by-mail system, jail election workers, and put Cyber Ninjas in charge of our elections," Teran said. "But this is not just about Arizona. Last year, Republicans in 19 states passed 33 different laws that will made it harder for people to vote."

U.S. News // 1 hour ago
Former Trump Organization CFO reportedly reaching plea deal
Aug. 17 (UPI) -- The Trump Organization's former Chief Financial Officer is hashing out the details of an agreement that would see him plead guilty to tax evasion charges, the New York Times was the first to report on Wednesday.

U.S. News // 3 hours ago
Court told R. Kelly paid witnesses to keep quiet about alleged underage tapes
Aug. 17 (UPI) -- Prosecutors contend R. Kelly recorded sexual encounters with underaged girls and then paid people who were aware of them not to talk, a federal courtroom was told on the opening day of his criminal trial Wednesday.

U.S. News // 4 hours ago
U.S. traffic deaths surge as driving increases
Aug. 17 (UPI) -- The National Highway Traffic Safety Administration announced 9,560 people died in vehicle crashes in the first quarter of this year, a 7% increase compared to 2021 and the most first-quarter deaths since 2002.

U.S. News // 5 hours ago
Bills restricting classroom topics have nearly tripled in 2022
Aug. 17 (UPI) -- State legislatures are increasingly proposing bills to restrict how topics including race, gender identity and sexual orientation are taught in school, according to a report published Wednesday by PEN America.

U.S. News // 6 hours ago
CDC announces overhaul after COVID-19 response failed 'expectations'
Aug. 17 (UPI) -- The U.S. Centers for Disease Control and Prevention announced plans Wednesday to overhaul the agency after reviews found it fell short in its handling of the COVID-19 pandemic and responded too slowly to monkeypox.
Advertisement

Zelensky warns Ukrainians to stay away from Russian installations in Crimea