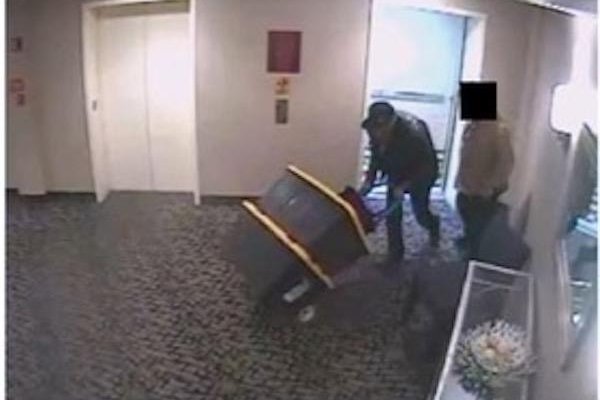 Oath Keepers defendant Edward Vallejo is seen at a Virginia motel in January 2021, wheeling in what prosecutors said were weapons and ammunition. Photo via U.S. District Court for the District of Arizona

Jan. 19 (UPI) -- In a new court filing Tuesday night, federal prosecutors spelled out more details about the cache of weapons and ammo the far-right Oath Keepers group planned to bring to Washington, D.C., during the attack at the U.S. Capitol a year ago.

The details came in a government memo that was filed to keep Oath Keepers member and defendant Edward Vallejo locked up while facing charges. It was filed in the U.S. District Court for the District of Arizona. Vallejo is scheduled to appear in court in Phoenix on Thursday.

The court filing said that Vallejo and other Oath Keepers "wheeled in bags and large bins of weapons, ammunition, and essential supplies to last 30 days" to a motel in Arlington, Va.

Oath Keepers founder Stewart Rhodes is charged along with Vallejo and others with seditious conspiracy in what federal prosecutors allege was a plot to oppose by force the execution of the laws governing the transfer of presidential power following the 2020 election.

According to federal prosecutors, their plan was to "speed those weapons into the hands of co-conspirators on the ground in Washington, D.C." when directed by leaders.

"Vallejo and others joined and implemented this plan by, among other means, using social media and encrypted messaging to communicate; amassing weaponry and tactical gear; organizing into regional teams to transport these items to the D.C. area; and staging Vallejo nearby to be prepared to assist his co-conspirators at his commander's orders," prosecutors said in the filing.

The filing also said that defendants "forcibly breached" the Capitol with Vallejo with "quick reaction" teams across the Potomac River "awaiting deployment."

According to the filing, Vallejo said on a Jan. 6 podcast that there would be a "declaration of guerrilla war" if certification of Joe Biden's election wasn't halted.

Prosecutors also said Rhodes, in a Dec. 22 interview with a regional Oath Keepers leader, warned of a "massively bloody revolution" if Biden was allowed to take office.

U.S. News // 7 hours ago
Judge finalizes verdict for Depp vs. Heard defamation trial
June 25 (UPI) -- A Virginia judge has finalized the verdict in the defamation case between Johnny Depp and Amber Heard after the former couple failed to reach a settlement.

U.S. News // 7 hours ago
Laundrie admits to killing Petito in notebook pages, calls it 'merciful'
June 25 (UPI) -- Brian Laundrie wrote in his notebook that he thought his killing of fiancée Gabby Petito last year in Wyoming was "merciful," pages released by his family attorney show.

U.S. News // 10 hours ago
Southwest showers, storms to keep fire risk at bay
While the rain will help dent the ongoing drought and keep wildfire concerns at bay, too much rain at once can lead to the opposite problem, with flash flooding a possibility.

U.S. News // 11 hours ago
Protests rage on for second day against abortion ruling
June 25 (UPI) -- Activists took to the streets for a second day to protest after Friday's Supreme Court decision overturned nearly 50 years of federal abortion rights guaranteed under Roe vs. Wade.