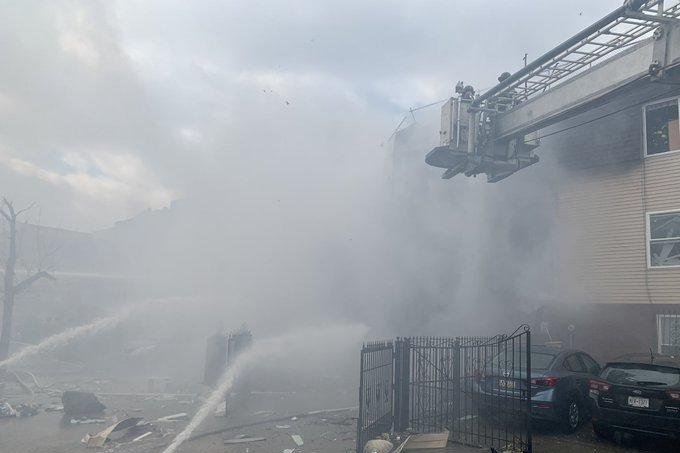 FDNY crews battle smoke and flames after an explosion caused the partial collapse of an apartment building in the Longwood area of the Bronx in New York City Tuesday morning, leaving one woman dead and eight other people injured. Photo courtesy FDNY Twitter

Jan. 18 (UPI) -- One woman is dead and eight more people were injured after an explosion at an apartment building in the Longwood area of the Bronx in New York City on Tuesday morning, officials said.

Five police officers were taken to the hospital suffering from smoke inhalation after the explosion and partial collapse of the building.

No cause has been determined, but gas was shut off to the entire block after emergency crews got the situation under control.

Fire investigators, along with those from gas company Con Edison were at the scene on Fox Street near Intervale Avenue, trying to determine what led to the explosion. They also hope to have the gas back on as soon as possible, given the cold temperatures.

"Clearly the action of the FDNY and NYPD officers and residents, their quick response, really allowed many people that were part of this crisis to not be seriously injured or die," New York mayor Eric Adams said during a news conference.

"The professionalism that was displayed, the fire officers that sustained injuries during these rescue efforts, we want to thank them for their actions. We saved lives today, our actions saved lives," said Adams, wearing a FDNY jacket and cap as he recounted how first responders risked their own lives.

"When you see the body camera video, you're going to see the quick response of the officers going into a burning building next door to the explosion, not realizing if there would have been an additional explosion. They went inside and carried out a woman who was trapped inside."

Adams said he is aware of speculation about a possible gas leak as a cause, but would leave that determination up to investigators.

The explosion comes just over a week after a deadly fire in a Bronx killed 19 people, including nine children.

"This tragic and frightening event, after the inferno we saw just days ago, really adds pressure on the Bronx and all those who have experienced overcoming this issue," Adams said.

FDNY members continue to operate at a 2-alarm fire at 869 Fox Street in the Bronx. pic.twitter.com/LDjt7faEJs— FDNY (@FDNY) January 18, 2022