'It was like a different planet': Sand sculptures litter Lake Michigan beach

A walk along Lake Michigan this week was a lot like a stroll through a museum gallery thanks to some weather elements coming together to create an incredible phenomenon. Small, delicate sand sculptures casually littered the beach at Tiscornia Park in St. Joseph, Mich.

"It was like a different planet," Terri Abbott told Fox 2. "I've never seen anything like them, and I spend a lot of time there!" Tiscornia Park is on the southeastern shore of Lake Michigan, about 190 miles west of Detroit.

Photographer Joshua Nowicki has taken many incredible photos of the phenomenon and other beautiful winter scenes in the Midwest and says the sculptures are a fleeting creation of nature.

"They do not last very long. The wind completely erodes them or knocks them down. If the temperature goes up above freezing they crumble, and often in the winter, they soon get covered by drifting snow," Nowicki told Colossal. The sculptures this year are the biggest he's ever seen with the largest being about 15 inches tall.

The otherworldly phenomenon is caused when a combination of weather elements occurs simultaneously: wind, cold and snow or rain. The wind erodes the frozen sand, which is slightly wet from precipitation then the cold air holds the delicate shapes in place.

Alan Arbogast, the chair of the Geography Department at Michigan State University who also studies the state's dunes, explained to Fox 2 how the sand formations are created just like a sculptor chisels away at stone until a form emerges.

RELATED Eastern U.S. on alert for thumping from another major winter storm

"I imagine what happened is that the sand is frozen. Then, we had a big storm roll through a couple weeks ago with strong winds. The wind blew along the beach and blasted out the areas that were a little less frozen," he explained. "Those things aren't being built up. Everything around the features that are standing up was eroded from it. Those are the things that are left behind."

Sunset photo of the sand sculptures at Tiscornia Park in St. Joseph, Mich., on Tuesday. (Twitter/DavidCaulfield_)

Like much of the country, parts of Michigan experienced cold weather and brutal winds in early January, making for perfect conditions for the phenomenon to occur. Brutally cold air from the Arctic made its way through the North Central states and into the Northeast.

The gusty conditions across portions of the Midwest led the outside air to feel even colder than the thermometer reading as AccuWeather RealFeel® Temperatures dipped below zero at times across northeastern Iowa, northern Illinois and central Michigan. AccuWeather forecasters say Tuesday was the coldest day of the winter so far in the region. The high on Monday was 20 degrees Fahrenheit with a low of 15 degrees. Overnight into Tuesday, the temperature dropped as low as 11 degrees Fahrenheit.

The average high temperature for this time of year in St. Joseph is 34, with the low bottoming out at 20, on average, according to the latest 30-year climate normals. Meanwhile, lake water temperatures have been running above normal this winter across the Great Lakes, with Lake Michigan's water temperature 1.1 degrees above average as of this week.

While the frigid temperatures aren't ideal for humans, it's clearly the perfect weather to form these sandy creations that caused several people, including meteorologist Dave Caulfield, to brave the cold for some stunning shots. Nature is incredible and can sometimes make sub-freezing temperatures a little more bearable.

Scenes from the season's snow and ice 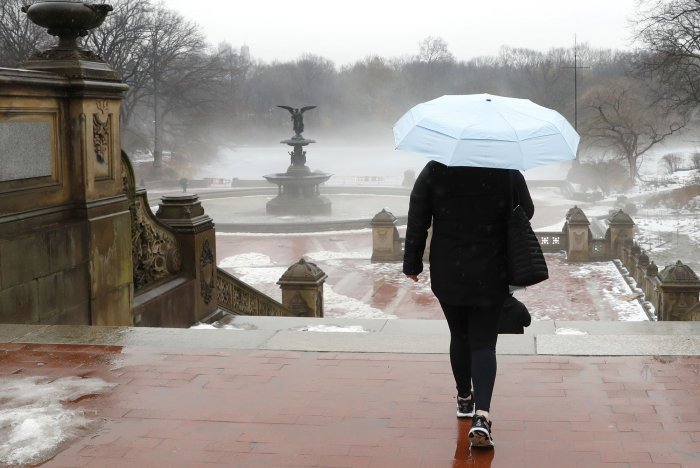 Rainfall and warmer weather brings a low fog to a snowy Central Park near the Bethesda Fountain and Terrace in New York City on February 3, 2022. Photo by John Angelillo/UPI | License Photo

U.S. News // 4 minutes ago
Ford slashes cost of EVs as it plans to boost production of Mustang Mach-E
Jan. 30 (UPI) -- Ford announced Monday it is reducing the prices of electric vehicles to "remain competitive in the marketplace," following on the heels of price reductions by EV leader Tesla.

U.S. News // 6 minutes ago
Biden to attend launch of Baltimore tunnel replacement project
Jan. 30 (UPI) -- President Joe Biden will travel to Maryland for the launch of a project which will help ease one of the largest rail bottlenecks in the northeast corridor.

U.S. News // 10 minutes ago
TravelCenters of America to install EV chargers
Jan. 30 (UPI) -- The amount of infrastructure needed to keep pace with the growing number of electric vehicles on the road is expanding.

U.S. News // 28 minutes ago
U.S. braces for winter storm across country, leaving ice and flooding
Jan. 30 (UPI) -- From the Rocky Mountains to the East Coast, the United States will be hit with a wintery storm system that could usher in flooding in the South and snow in the North.

U.S. News // 1 hour ago
Congress to grill TikTok on list of concerns from spying to child safety
Jan. 30 (UPI) -- The CEO of TikTok will testify before Congress to address concerns surrounding the social media app's links to the Chinese Communist Party and its impact on children, the House Energy and Commerce Committee announced.

U.S. News // 2 hours ago
Stable retail gasoline prices might not last
Jan. 30 (UPI) -- A busy period of refinery maintenance should support higher prices at the pump over the coming weeks and months.

U.S. News // 20 hours ago
Attempted murder suspect on the run still using dating apps
Jan. 29 (UPI) -- A Nevada man accused of attempted murder and torturing a woman in Oregon is on the run and still active on dating sites, police say.
Advertisement