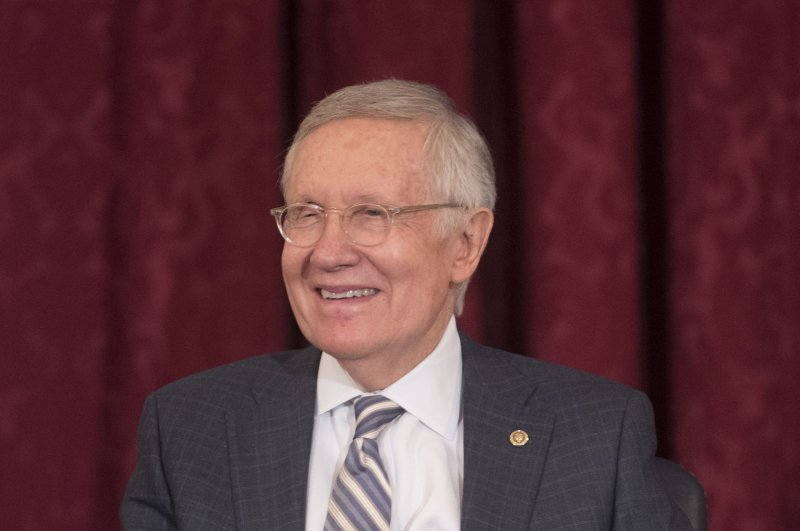 "I am heartbroken to announce the passing of my husband, former Senate Majority Leader Harry Reid," his wife, Landra Reid, wrote, according to CNN. "He died peacefully this afternoon, surrounded by our family, following a courageous, four-year battle with pancreatic cancer."

Reid underwent surgery for pancreatic cancer in 2018 and said about a year later that he was in remission.

Throughout his career in Congress, representing Nevada, Reid was known as combative yet soft-spoken as he fought for legislation, serving a key role in passing Obamacare in late 2009.

Born Dec. 2, 1939, in Searchlight, Nev., about 60 miles south of Las Vegas, Reid was a boxer in his youth before attending Utah State University and later moving to Washington, D.C., to obtain a law degree from George Washington University while working as an officer for the United States Capitol Police.

He returned to Nevada after law school and became the youngest person ever elected as lieutenant governor, serving in the role from 1971 to 1975.

RELATED Sarah Weddington, lawyer who argued for abortion rights in Roe vs. Wade, dies at 76

He was then elected to represent Nevada in the Senate in 1986, working his way up to Democratic whip from 1999 to 2005, before earning the role of party leader, which he held until he retired in 2017.

The stint included a run as Senate majority leader from 2007-2014, surpassed only by Democrats Mike Mansfield of Montana and Alben W. Barkley of Kentucky.

Reid was credited for negotiating the Dec. 24, 2009, passage of the Patient Protection and Affordable Care Act, working behind closed doors to approve a filibuster-proof 60 votes, including agreeing to a Medicaid reimbursement provision for Nebraska to sway Sen. Ben Nelson, D-Neb.

"Here's what I want you to know. You were a great leader in the Senate, and early on you were more generous to me than I had any right to expect," former President Barack Obama wrote in a letter to the late Senator that he shared Tuesday. "I wouldn't have been president had it not been for your encouragement and support and I wouldn't have got most of what I got done without your skill and determination."

Current Senate Democratic leader Chuck Schumer said on Twitter Tuesday that flags at the Capitol had been lowered to half-staff in Reid's honor.

"Harry Reid was one of the most amazing individuals I've ever met," he wrote in a statement. "He never forgot where he came from and used those boxing instincts to fearlessly fight those who were hurting the poor and the middle class. He's gone but will walk by the sides of many of us in the Senate every day."