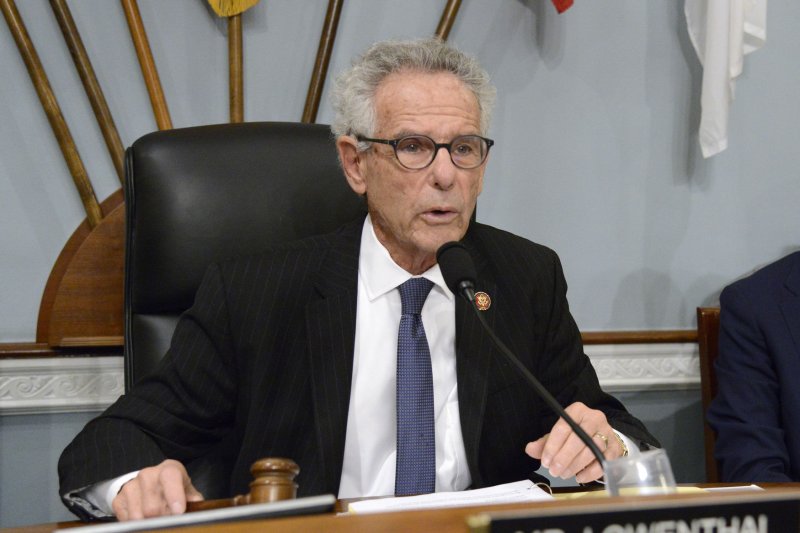 Rep. Alan Lowenthal of California announced Thursday he will not seek re-election in the midterms since he wants to spend more time with family and be under less pressure. File Photo by Mike Theiler/UPI | License Photo

"I am announcing today that I will not be running for re-election to Congress in 2022," the 80-year-old Lowenthal, who has served the 47th Congressional District of California for almost a decade in Washington, D.C., said in a statement.

Lowenthal added that it was time to turn over the reigns to someone else, so he can focus on spending more time with family.

"It is time to pass the baton," Lowenthal said. "It is time to rest and surround myself with the benefits of a life well lived and earned honorably in the service of my fellow citizens."

"During this journey, I have had the pleasure of raising two fine sons who have blessed me with four grandchildren who I adore," he continued. "I now look forward to spending my time with them and watching them grow and flourish into wonderful people like their parents."

Lowenthal also said that he wanted to spend more time with his wife, Debbie, who he referred to as his "rock throughout this journey."

The announcement makes Lowenthal the fourth California House incumbent to make an announcement of not seeking re-election, including a Republican and two other Democrats.

Republican Rep. Devin Nunes, R-Calif., announced earlier this month he will resign from the U.S. House of Representatives early next year to become CEO of a new company founded by former President Donald Trump.

Democratic Rep. Jackie Speier, D-Calif., announced last month that she won't run for re-election, similarly saying she wanted to spend more time with family. And Democratic Rep. Karen Bass, D-Calif., has launched a campaign to become the next mayor of Los Angeles.

The National Republican Congressional Committee referred to Lowenthal's announcement as a sign of lack of support for Democrats in the midterms in a statement.

"Democrats have a full-blown retirement crisis on their hand because voters are rejecting their agenda of higher prices, higher crime, and open borders," the NRCC spokeswoman Torunn Sinclair said in the statement.

Lowenthal has served as a public servant over three decades.

He entered politics as a neighborhood group leader who ran for Long Beach City Council after the incumbent refused to place a proposed police oversight board on the ballot, according to Long Beach Post News.

Lowenthal added that he felt it was time for some relief from the pressure of the position.

"It's time to take more time taking care of myself and my family and enjoying life and not having all the pressure," Lowenthal told the Long Beach Post News. "I'm always under some kind of pressure."

He told the Long Beach Post News protecting the environment has been one of his main priorities since he first walked the district to gain residents' votes in his bid for City Council in the 1990s.

"As I walked the district they would tell me, 'That's really fine that you're running Alan, but what's this black soot on my windows?" Lowenthal said, referring to petroleum coke dust from ports of Los Angeles and Long Beach. "Why do I set these things out on my porch and they turn black within a few hours?"

Lowenthal was later elected to the California Assembly and the state Senate where he advocated for the creation of independent redistricting commission to draw the lines for state and federal districts instead of having politicians do it.

The redistricting effort on the new commission led to the creation of the 47th Congressional District boundaries, where Lowenthal has served since 2012.

In 2017, Lowenthal joined members of indigenous communities in Alaska and some fellow Congress members in voicing opposition to Republican leaders effort to pass legislation that would open up a section of the Arctic National Wildlife Refuge to oil and gas drillers.

Lowenthal told Long Beach Post News that he would spend his last year in office pushing for his Break Free From Plastics bill that he introduced last year, which places the burden of recycling on industry producers.

Along with the environment, Lowenthal has also been passionate about LGBTQ rights.

In 2013, he became the first member of Congress to permanently fly the Pride Flag outside his congressional office to demonstrate support for marriage equality.

U.S. News // 17 hours ago
Heavy storms to slice through heat, humidity in the Northeast
June 26 (UPI) -- Summertime heat and humidity have taken a hold of the Northeastern states for the final weekend of June. A strong cold front is on the way to cut steamy conditions.