Unemployment filings in U.S. fall off a cliff -- to lowest figure in 52 years

Nov. 24 (UPI) -- New unemployment filings in the United States have now reached a level not seen since before the impact of the COVID-19 pandemic, the Labor Department said in its weekly report on Wednesday.

In fact, the number of new claims has fallen to a level not seen in more than a half-century.

The final week before the U.S. economy was impacted by the coronavirus pandemic, in the middle of March 2020, saw 256,000 filings. For weeks, the weekly total slowly approached the prepandemic level before finally falling off a cliff with Wednesday's report.

Seasonal adjustments made around the Thanksgiving holiday contributed greatly to the decline in new claims, the department said.

"The seasonal factors had expected an increase of 88,572 from the previous week," the Labor Department said in a statement.

Without the adjustments, new claims actually rise over the previous week to nearly 259,000. 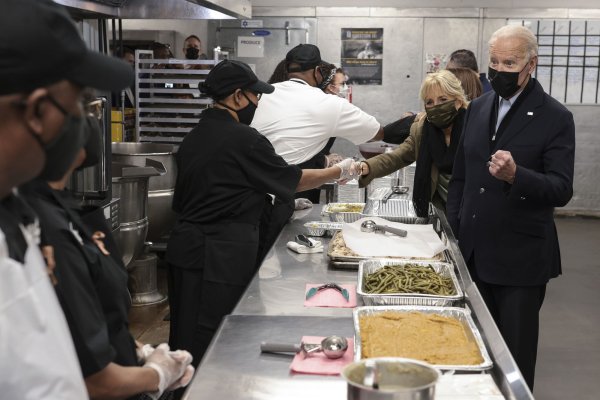 President Joe Biden speaks with employees at DC Central Kitchen in Washington, D.C., on Tuesday. On Wednesday, he said the unemployment report shows that the job market has greatly rebounded from the impact of the coronavirus pandemic. Photo by Oliver Contreras/UPI

President Joe Biden hailed the report, which was released by the department a day earlier than usual due to the Thanksgiving holiday.

"Last year, there were 21 million unemployment insurance claims before the Thanksgiving holiday," Biden said in a statement. "Today, there were 2.4 million.

"This is a historic jobs recovery: 5.6 million jobs created since I took office and an unemployment rate of 4.6% -- two full years earlier than experts predicted was possible."

Biden cited his American Rescue Plan, which was passed by Congress in March, and rising vaccinations as key factors in the decline in jobless filings. He also noted Organization for Economic Cooperation and Development figures that show the U.S. economy grew at a faster rate in the first three quarters of 2021 than at any other time over the past four decades.

"In fact, according to the OECD, the U.S. is the only major economy that has exceeded its prepandemic level of gross domestic product," Biden added.

"We have more work to do before our economy is back to normal, including addressing prices increases that hurt Americans'pocketbooks and undermine gains in wages and disposable income."

U.S. News // 42 minutes ago
Republican AGs warn Walgreens, CVS over mailing abortion pills
Feb. 1 (UPI) -- Twenty Republican attorneys general are warning Walgreens and CVS that they will face consequences if the U.S. pharmacy giants distribute abortion pills by mail in their states, saying it is a violation of federal law de

U.S. News // 3 hours ago
U.S. blacklists Russian sanctions-evasion network
Feb. 1 (UPI) -- The administration of President Joe Biden blacklisted 10 people and 12 companies on Wednesday as it tightens its financial grip on Russia over its war in Ukraine.

U.S. News // 6 hours ago
Ohio man gets 10 years in prison for trying to join ISIS
Feb. 1 (UPI) -- A federal judge on Wednesday sentenced a man in Ohio to a 10-year prison sentence for attempting to join the terrorist group Islamic State of Iraq.

U.S. News // 6 hours ago
Kobe Bryant's iconic MVP jersey heads to auction
Feb. 1 (UPI) -- Kobe Bryant's Lakers jersey from his only Most Valuable Player season will be auctioned this week and could fetch up to $7 million, according to Sotheby's.

U.S. News // 7 hours ago
President Biden, House Speaker McCarthy have 'frank' conversation about U.S. debt
Feb. 1 (UPI) -- Newly elected House Speaker Kevin McCarthy said he was encouraged by his meeting with President Joe Biden to discuss the national debt, which left him with the belief that an agreement can be reached.
Advertisement

Missing radioactive capsule found by side of Western Australia highway