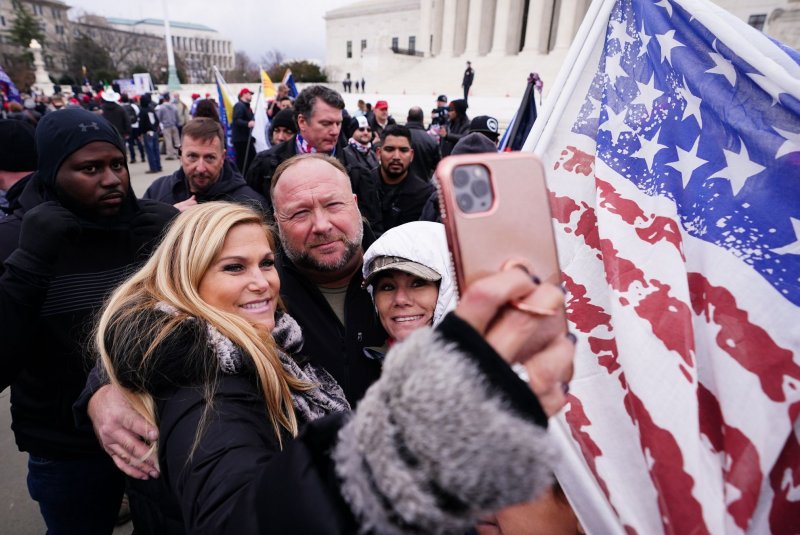 Alex Jones reportedly helped organize the rally at the Ellipse including by facilitating a donation to provide what he described as 80% of the funding and spoke at a Jan. 5 rally on Freedom Plaza. File Photo by Kevin Dietsch/UPI | License Photo

Stone, a longtime Republican operative, and Jones, founder of the right-wing conspiracy website InfoWars, were subpoenaed for their alleged involvement in planning the "Stop the Steal" rally and other events that preceded the insurrection.

"We need to know who organized, planned, paid for, and received funds related to those events, as well as what communications organizers had with officials in the White House and Congress," committee Chairman Rep. Bennie Thompson, D-Miss., said in a statement.

The committee said Stone reportedly spoke at rallies on Jan. 5 and was scheduled to speak at the Jan. 6 rally at the Ellipse that directly preceded the riots at the Capitol, while using members of the far-right group the Oath Keepers -- including one who was indicted for his involvement in the riots -- as bodyguards.

Jones reportedly helped organize the rally at the Ellipse in part by facilitating a donation to provide what he described as 80% of the funding. He also spoke at a Jan. 5 rally on Freedom Plaza.

The committee stated that Jones has said he was told by the White House he was to lead a march from the Ellipse rally to the Capitol where Trump would meet the group and speak.

"Mr. Jones has repeatedly promoted unsupported allegations of election fraud, including encouraging individuals to attend the Ellipse rally on January 6th and implying he had knowledge about the plans of the former president with respect to the rally," the committee asserted.

The panel also subpoenaed Dustin Stockton and his fiancee Jennifer Lawrence, both of whom were involved with organizing a series of rallies promoting unsupported claims of election fraud following the 2020 presidential election, including the rally at the Ellipse.

Taylor Budowich, a senior adviser for Trump's 2020 campaign who is currently working as the former president's primary political spokesperson, was also subpoenaed for soliciting an organization to conduct a social media and radio campaign encouraging attendance at the Ellipse rally.

All five witnesses were ordered to turn over any documents related to the riots and testify by mid-December.

Trump, however, has encouraged former members of his administration and other allies to defy the subpoenas.

An attempt by the former president to block records from the committee was denied by a federal judge earlier this month.

U.S. News // 12 hours ago
6 killed, more injured in New York bus crash
Jan. 29 (UPI) -- Six people are dead and another three are injured after a box truck and a bus collided head-on in New York.

U.S. News // 13 hours ago
Jewish family sues NYC's Guggenheim Museum seeking return of Picasso painting
Jan. 29 (UPI) -- A Jewish family has filed a lawsuit against the Guggenheim Museum in New York City seeking the repatriation of an iconic painting by Pablo Picasso that they allege was sold to allow the family to escape Nazi Germany.