Nov. 13 (UPI) -- A jarring pattern shift is set to usher in not only much colder air across the Northeast this weekend into early next week but also the first accumulating snow of the season in some areas.

A second storm will follow and could lay down more widespread wintry weather -- and even the first snowflakes of the season close to the I-95 corridor.

Colder air will be on the move on Saturday, and AccuWeather chief on-air meteorologist Bernie Rayno said it will feel more like early December than the middle of November. A cold rain will sweep across the region as the first of two systems shifts eastward, but for some areas above 2,000 feet, snow will fall. The sudden change from highs in the 50s and 60s will add to the weather whiplash that could affect many in the Northeast this weekend.

The first dose of wintry precipitation is expected in the mountains above 2,000 feet from western and northeastern Pennsylvania to northern New England Saturday into Saturday night. Cold and blustery conditions will quickly advance and change rain over to snow after sunset and into Saturday night. Accumulating snow is in store across much of the Catskills, Adirondacks, Berkshires, Green and White Mountains. A small amount of snow may whiten the Poconos and lower elevations from the upper Hudson Valley into interior New England.

Amounts will generally be light with a slushy coating to an inch or two likely since the storm will be quick-moving and depart the region by Sunday morning. 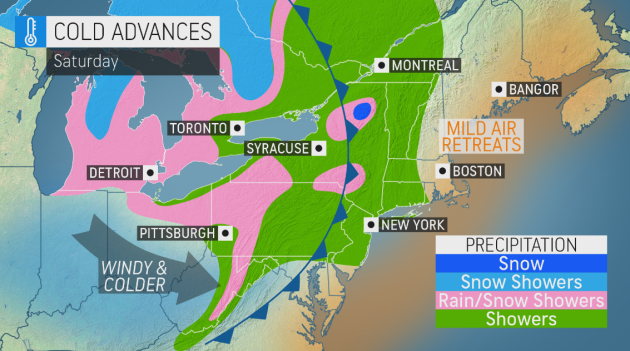 "A quick burst of snow could whiten grassy surfaces and trees across the higher elevations in the Northeast and make for a picturesque scene," AccuWeather senior meteorologist Bill Deger said.

But, since this will be the first snow for some and roads have not yet been treated for winter weather, slippery conditions may develop on roads at higher elevations - even where only minor snow accumulations occur.

The next system will follow close behind, and with colder air already established across the Northeast, it could have more wintry tricks up its sleeves. A clipper storm, a quick-moving system with little moisture available, will race across the northern Plains on Saturday before diving southward toward the central Appalachians Sunday into Sunday night. 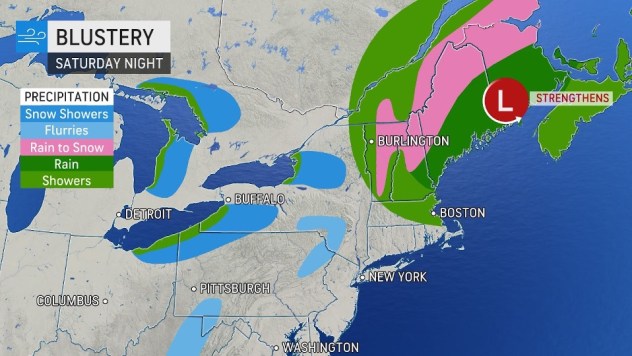 Cold air left in the wake of the Saturday storm will allow rain and snow showers to occur over a broader area of the Northeast Sunday night into Monday. Accumulating snow could fall at lower elevations and bring the first snowflakes of the season to some portions of the I-95 corridor.

While lake-effect snow showers will be ongoing downwind of the Great Lakes on Sunday night and Monday, snow will also spread to many interior locations across the Northeast.

"While any accumulating snows should be limited to the eastern Great Lakes and parts of the Appalachians, the season's first flurries could fly in places like Harrisburg, Allentown and Hartford," Deger explained.

Rayno noted that parts of New England could be dealing with snowfall on Monday as the system shifts off the coast and strengthens. Closer to the Eastern Seaboard, steady, cold rain will dampen areas from the New England coast to the Jersey Shore. 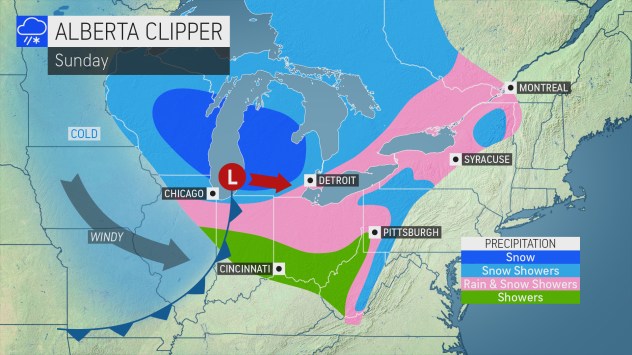 Snowflakes could even reach places such as Washington, D.C., Philadelphia and New York City, but AccuWeather meteorologists anticipate snowflakes will reach just short of these major cities.

Cities such as Pittsburgh and Harrisburg, Pa., and Albany, N.Y., are more likely to experience snow and even some slippery conditions for the Monday morning commute, especially across bridges and in normally cooler spots.

Even though flakes may fly early next week in parts of the I-95 corridor, no accumulating snow is currently expected. In fact, it would still be quite early for any accumulating snow in Philadelphia and New York City. The average date of the first measurable snowfall in New York City is Dec. 7, and in Philadelphia, it's Dec. 9. Measurable snowfall is an amount of 0.1 of an inch or greater. 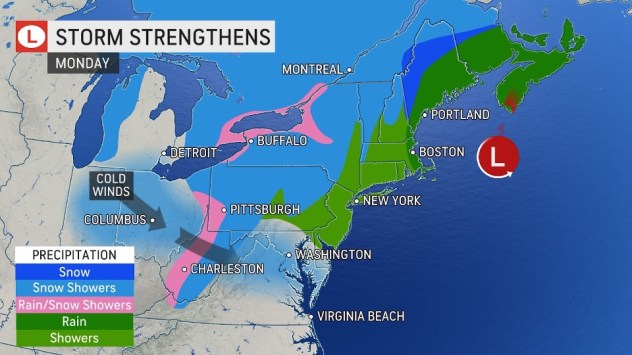 On the other hand, in places like Pittsburgh or Albany, N.Y., accumulating snow arriving this weekend or early next week would be considered right on time. The average date of the first measurable snow in Pittsburgh is Nov.14. Albany's average date is Nov. 16.

Regardless of where snow falls, it will feel brisk and wintry across the entire Northeast as cold winds howl behind the storm off the coast on Monday. 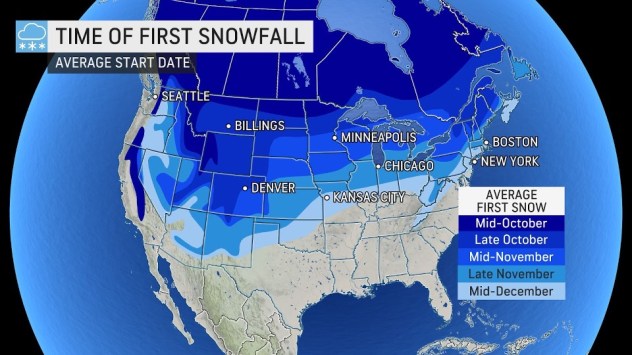 Old Man Winter is expected to loosen his grip on the Northeast by Tuesday. Temperatures will begin to moderate toward normal levels for mid-November, taking the edge off the chill and likely melting most of the snow that does fall from Saturday night into Monday.