The Dow Jones Industrial Average closed the day down 240 points on Wednesday as consumer prices rose 6.2% year-over-year the largest increase since the 1990s. File Photo by John Angelillo/UPI | License Photo

The blue-chip index dropped 0.66% at the end of trading, while the S&P 500 fell 0.82% and the Nasdaq Composite declined 1.66% as markets responded to the Labor Department's October Consumer Price Index.

"That's going to be one of the big things going forward, to see whether or not that consumer sentiment can bounce back, whether consumers will be resilient in the face of these price pressures, or whether they'll start to pull back a bit and decide they're going to hold off on spending and wait to see when prices come down or at least stabilize before they spend more in the new year," Yung-Yu Ma, BMO Wealth Management's chief investment strategist, told Yahoo Finance.

Following the CPI report, the benchmark 10-year treasury yield rose by about 10 basis points and traders moved their expectations for when the Federal Reserve would announce its first interest rate hike, anticipating greater odds that it would arrive in July.

Investors moved away from tech stocks as the treasury yield soared, with chipmakers Advanced Micro Devices and Nvidia fell 6.08% and 3.91% respectively.

Bank stocks, however, got a boost from the bond yields spike as Wells Fargo stock rose 0.94% and Bank of America climbed 0.75%.

RELATED Investor group acquires McAfee for over $14B

Shares of Tesla also rose 4.34% after falling in the previous two sessions.

Disney also reported fourth-quarter earnings on Wednesday, 37 cents in earnings per share, short of analysts' expectations of 51 cents while its $18.53 billion in reported revenue also didn't meet predictions of $18.78 billion.

Disney stock fell 0.38% before the bell but dropped 3.38% in after-hours trading following the earnings report.

U.S. News // 18 minutes ago
Approval for Supreme Court tumbled after leaked opinion on abortion, poll shows
May 25 (UPI) -- The share of Americans who approve of the job the U.S. Supreme Court is doing slid 10 points in the weeks after a leaked draft opinion signaled that the court's conservative majority intends to overturn Roe vs. Wade.

U.S. News // 8 hours ago
FDA chief says agency, baby-formula producer Abbott share in blame for U.S. shortage
May 25 (UPI) -- Federal regulators and executives from the baby formula industry appeared before lawmakers Wednesday to explain what's behind the present shortage of infant formula in the U.S. and shed light on some possible answers.

U.S. News // 5 hours ago
Police trying to piece together Texas school shooting as nation mourns 19 children, 2 educators
May 25 (UPI) -- Authorities in south-central Texas will give an update Wednesday on the elementary school attack that killed nearly 20 children and two educators and became the deadliest school shooting in the United States in a decade. 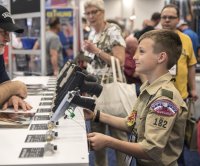 U.S. News // 3 hours ago
Trump, Texas' Abbott set to speak at NRA convention after deadly school shooting
May 25 (UPI) -- Texas Gov. Greg Abbott, who announced that 19 children were killed in a shooting attack at their school on Tuesday, is scheduled to speak at the NRA's annual convention this week just a few hours away in Houston.